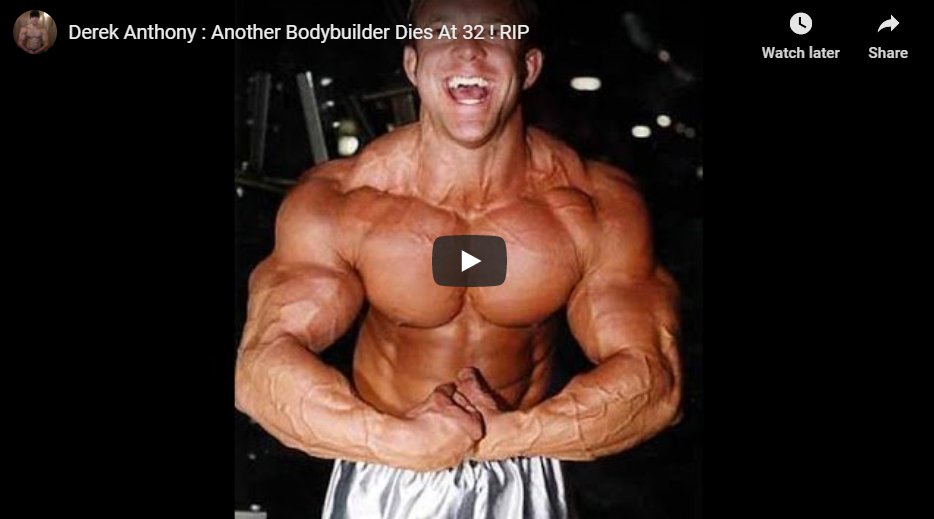 In the days immediately preceding the full takeover of social media platforms, magazines were still read by most, and bodybuilding podcasts were in full swing. People congregated at message boards, where mods and admins did their best to control the direction of the sport, while fans posted incessantly. It wasn’t just fans who got into it, though. You had big names, like the subject of today’s article, the one and only, Derek Anthony. Derek was the real deal; from his days at RXMuscle, pushing GAT, and then on his own, with The DA Show, Anthony was one of the fastest rising stars of his time.

While he used Facebook and YouTube, seeing big numbers on both, this was pre-IG. Who knows where DA would be today, given just how big social media is in all of our lives. In many real ways, Derek was a visionary. Remember, there was a time that print media balked at all things digital. The idea that an app that only allowed fifteen second videos would somehow overtake everything, would have been a stretch, to the say the least. Further, who had a life that could be that entertaining? How many times could you see Ronnie heat up grits and cook eggs? What’s exciting about that? Even training, how many times could someone watch someone do hams or train their chest? The thing is, no one understood what was to come.

Today, everyone is on social media, everyone has a platform and everyone talks about all things. In DA’s day, there was no Bostin Loyd talking about gear, there wasn’t a Tony Huge experimenting on video, and there simply wasn’t the reach there is today. Back then, the internet required a desktop or laptop, phones were very limited in what could be done (compared to today), and because social media had less reach, there was less of an all out race by all for attention. Nonetheless, when RXMuscle refused to give Derek his own radio show, he went out and made his own. Despite the fact social media wasn’t there and without utilizing print media to carry his message, word of mouth spread like wildfire. People knew what site to go to, at what time, and never missed a single episode of The DA Show. That’s what you call starpower.

There’s a lot of reasons people were intrigued by Derek. It wasn’t all bad. He wasn’t mad all the time, but there was something about heated discussions on the message boards. You had GetBig, MD, RXMuscle and of course, Bodybuilding.com. Some guys only went on certain forums, others went on them all. Guys would spend entire days going back and forth on who won a show ten years ago, which supplement brand was superior, or what was the best way to train. Other topics were based on gossip. There was always gossip, especially because some of the conversations had been too uncensored for Facebook. Sometimes, guys would openly threaten each other, and sometimes the drama on the boards spilled over to real life. You could have guys attack each other multiple times a day, everyday, sometimes for years, online. Then all of a sudden two forum rivals suddenly were in the same room together. It was definitely interesting. As long as the mod didn’t get involved, the boards were pretty much a free-for-all. When the mods intervened, that also added fuel to the fire because you could have a very outspoken type, with a lot to say, getting muted. Sometimes a user had to sit out a timeout, other times bans lasted several days. In rare occasions, mods and admins would ban a user for life. Then they had zero voice; they could create a new account or go to another forum. No one had more message board drama than Derek Anthony. People used to LOVE to talk shit about him. It was like he was a magnet for haters and contrary to taking the high road of not feeding the trolls – Derek kept them VERY well fed.

For as much as guys talked and with keyboard warriors everywhere, what distinguished Derek from the rest, was that he was always visible. If you went to an expo, you’d see him at the GAT booth or walking around. If you wanted to find him training – you know where to go. Anthony was a fixture in the gym scene, the club scene, and all their big expos. Whereas some guys played down any role they might have in certain photoshoots or even cam work, Derek put all that out. No one had to ask him about it because he would use the reach he gained from competing, working booths, and doing radio shows, to make him more money on any other business ventures he was involved with. Guys like Derek don’t need social media, but they make social media bigger than what it is. If you had a guy doing cam work, photoshoots, radio shows, training like a madman in the gym and fighting with a sea of trolls online, who wouldn’t want screenshots of that, selfies, and Reels? The fact is, people just couldn’t get enough. But all that being said, Derek would’ve back his mouth up. Take Rich Piana and Prophet Muscle. If Prophet had pulled that with Derek, he would’ve had his ass handed to him. It’s just a different mindset. When Derek got angry online, you knew he was angry in-person, as well. What you saw, is what you got. Derek didn’t build a special persona for the fitness industry, the fights online weren’t staged, and people recognized that. No one questioned it; it was real.

When you stop to think about the current state of the media and social media, that’s one thing that’s missing. Everything is staged, everyone is reading off of a script, but what’s missing? People want realness, they almost crave for the awkwardness of a perfectly oiled machine going haywire. Media – and especially social media – have become stagnant. They’re boring; I’m not sure how else to put it. A lot of current stars would see that as a challenge to be even more controversial, but that’s not it. There’s no doubt there’s people out there that will eat whatever they have to, jump off a cliff to their likely death, or spit fire, if they have to, just to popular. If the most popular person can eat 25 hamburgers in an hour, there’s a line of people ready to try to eat 26. Realness isn’t about being the craziest, or the toughest, or the most outspoken. Being real is about being who you are and it’s also about being the same person to all people.

That’s probably the biggest issue people have with politicians. A politician can address three different groups (e.g. liberals, moderates, and conservatives), making all three groups feel like they’re being 100% represented by him/her. Well how can that be? How can one person bat exclusively for three different teams, at the same time?

Social media influencers today, have mastered the politicians’ approach of saying whatever is necessary to gain acceptance. Other influencers opt for the PC approach. They will substantially alter what they said in order not to offend anyone and reach the greatest number of people. Businesspeople love the PR approach as well. DA wasn’t a politician and he also wasn’t PC Police. He didn’t care about telling people what they wanted to hear or toning down his passion just to not make waves. He led an interesting life and he lived it to the fullest.

When Derek used SEO’s, he didn’t hide it. When he did cam work or what some might call “G4P,” he boasted of dating porn stars and showed off how much attention he had from the ladies. He took haters head-on and he annihilated them online. He didn’t ignore them and he didn’t go running to the mods/admins for help. He came alive when he was battling his adversaries. Those are the posts you couldn’t stop reading. Every so often, he’d take to video. And his participation in The Whack Pack was legendary. Sometimes just listening to his outlooks on life or how he responded to questions from Dave, John, or Jimmy The Bull, were the highlight of the whole episode.

Whenever I think of people we’ve lost way too young, Derek always comes to mind. He never stopped fighting and he never stopped helping people. When he started his show, he sent me a shirt. It was an XL, which is tiny for me, but he still wanted me to have one. I really appreciated the gesture and in my leanest days, I’ve worn it for a selfie or two. When I think of how much he loved the sport and how much he loved people, it makes his absence all the more missed. If he had kept doing what he was doing, there’s no question in my mind that DA would have been the next Rich Piana Before There Was Rich Piana.

I mean, think about it, really think about it. Rich Piana was basically doing what Derek was, and he was doing it when Youtube, IG, and Facebook hit on smartphones. If Derek had had the right marketing plan, he could have been as big, if not bigger, than Rich Piana. He was also NY All The Way. He loved the Yankees, his NY culture, muscle cars and hardcore training. Imagine Piana’s level of superstardom, pumping up DA’s life and mindset, instead. There’s no question bodybuilding would look totally different today. Everyone would have an Italian accent, everyone would drive a muscle car, and everyone would be rockin muscle tanks. In the end though, we miss Derek, and we recognize how much a trendsetter that he was.

What are some memories you guys have of the legendary Derek Anthony?