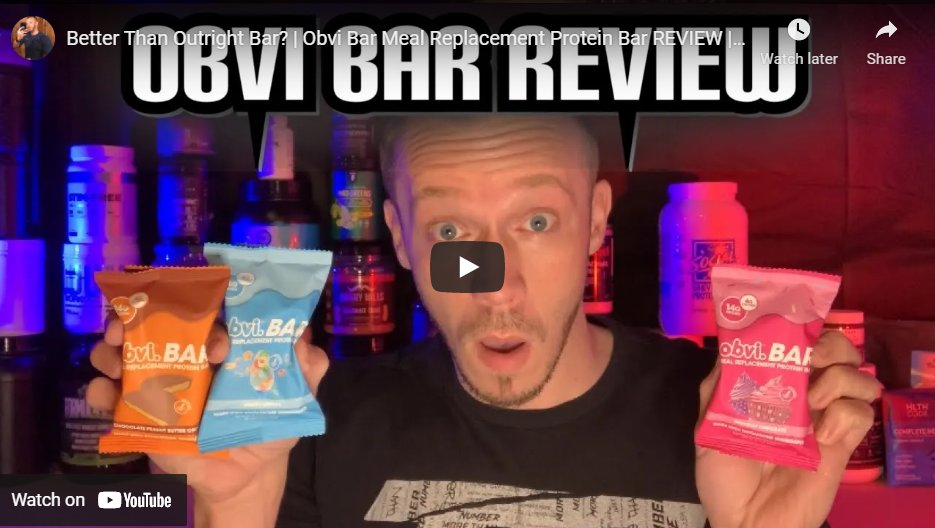 If you’ve been following my social media, you would have seen about a week ago that I had my oldest son (he’s six years old) try a new bar, and I recorded a video to get his reaction and first impression. He loves this kind of stuff, so I thought it would be fun, and he thinks it’s cool when I videotape him doing things for social media. The bar I’m referring to is the soon-to-be-released Obvi Meal Replacement Protein Bar.

While we tried all three bars, the one on the video that we tried was the Birthday Cupcakes flavor. Being that I have an extensive background when it comes to bars in the industry, what were my thoughts, and what did my son think?

My son was around two before I left Nature’s Bounty. During my time with the company, I worked on and with many different types of nutrition and protein bars from MET-Rx, Pure Protein, Balance Bar, and The Best Bar Ever. Jax (my son) was able to try some of the different protein bars from the brands I worked with, and has become quite the connoisseur. And trust me, he’ll tell you flat out when something is disgusting.

There have been a ton of peanut butter-based bars hitting the market lately, and almost all of them have been pretty dang delicious. But there’s one opinion that you’ll never get a lie from, and that’s a child. They will be brutally honest whether you can handle the truth or not. Therefore, I wanted to videotape my son trying the bar to get his authentic reaction as his facial expressions, and the things that come out of his mouth will be a sign of if these bars are good or resemble cardboard.

As mentioned above, we tried the Obvi Meal Replacement Protein Bar Birthday Cupcakes flavor on video, but we also tried the Fruity Cereal flavor as well as the Chocolate Peanut Butter Crunch. Let’s just say my son is a huge fan. While the Fruity Cereal flavor didn’t get the same excitement from him as the other two, he mentioned to me that he would eat those every day if I bought them for him, and in the video, I asked if they get two thumbs up, and he said, “Two thousand.” (Guess you can say he really liked them)

The other peanut butter (or nut butter) bars that I’ve enjoyed in the past have been the Outright Bars, but the profile between the two are fairly similar, with the main difference being the addition of collagen protein in the Obvi Meal Replacement Protein Bars.

How Does the Profile Look?

The profile on bars like the Outright Bar and the new Obvi Meal Replacement Protein Bar tend to fall on either side of the fence. You have the people who prefer a more natural type of protein bar that is made with real food ingredients and don’t mind the carbohydrates, fat, and sugar being a little high, and then you have the people who look at the profile and say, “There’s no way I’ll eat something with that much sugar in it.” Either way, people have the right to their own opinion, and if people don’t like these bars, they’re stupid. Just kidding (maybe not).

But in all seriousness, if you’re looking for a bar that is low in sugar, carbohydrates, and fat, these nut butter-based bars are probably not going to be your cup of tea – and that’s fine. But for those who want a delicious bar that can crush a sweet tooth, the Obvi Meal Replacement Protein Bar fits the bill.

While the macros may change ever so slightly between flavors, you’re looking at a bar that is 270 calories (which is excellent, in my opinion, but I’m not sure I would really call it a “meal replacement”), 12g of fat (which you knew was going to be high due to it being a nut butter bar), 30g of carbohydrates, 15g of sugar, and 14g of protein. On top of the whey protein isolate found in the bar, you’re also getting 4g of collagen per bar if you’re into that kind of thing.

Is This Bar an Obvi-ous Choice?

Would I say that the Obvi Meal Replacement Protein Bar is going to be something guys across the nation are going to rush out to get? No, probably not. That said, I’d certainly eat them – they’re delicious. And the fact that my son would eat it and that it could be an easy way for me to increase his daily protein intake (he’s a carb-a-holic) makes perfect sense and makes my life a whole heck of a lot easier. Circling back, I see the bar doing exceptionally well in the female demographic and even for kids (they don’t need to eat the entire bar in one sitting).

If you’re looking for something different from the typical protein bars out there or need to change it up from the Outright Bar flavors you’ve been eating for months, I’d definitely recommend you give the Obvi Meal Replacement Protein Bar a shot. The flavors are great, the profile is good considering it’s a nut butter-based bar, and 14g of protein isn’t bad if you’re using it between meals or in place of a snack or dessert – which that Birthday Cupcakes flavor could easily slide in and replace that piece of cake you’ve been craving.

Since they aren’t released yet, I don’t have any place where I can recommend you pick them up, nor what the pricing is going to look like at various online retailers, but at the time of writing this, when looking at the Obvi website, it appears that they will sell them on their site at $39.99 for a box of 12 bars. How does that price compare to other similar bars on the market like The Outright Bar? It’s a little on the high side, but if you’re looking for something that has some collagen in it and unique flavors, it could very well be worth your time and investment.

Newer Post
Do This One Thing to Be Happier with Your Life
Older Post
Let’s Help Our Friend, IFBB Pro Bola Ojex