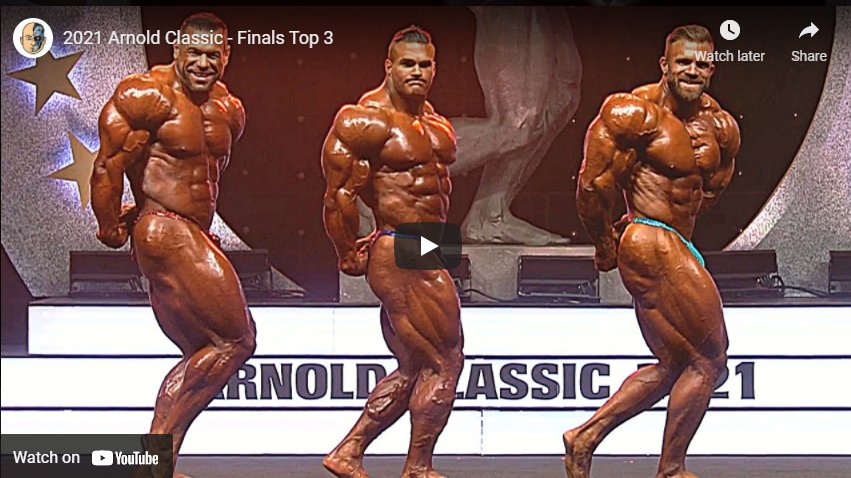 In what could only be described as a win that shocked the world, Nick Walker won the second most prestigious event in bodybuilding. Just one day out from the contest, I penned an article for Iron Magazine, where I asked the question, what if Walker won? What would that mean for his career, for the media, and for the upcoming days leading up to the most important contest in the sport, the prestigious 2021 Mr. Olympia, held once again, in Orlando, FL. I talked about the dynamic of the Arnold, being so close to the O. This is the first – and only – year to date, where the two biggest contests were less than a month from each other.

Whereas, the usual buzz from the Columbus contest lasts from March to Summer, this win, will clearly dominate the sport’s talking points well into Orlando – and even beyond it. What I mean by that, is whoever wins the O, may have to share the spotlight with the Arnold winner. This is truly unique, because assuming Ramy is able to successfully defend his title, he will have to share the spotlight with Nick Walker for at least into the New Year. Winning the Arnold is by no means a small feat, it’s not some trivial notch on one’s resume. It’s a really big deal.

When you to stop to think about what Walker has been able to achieve, in the relatively short run from when he turned pro in a tent in Pittsburgh, it’s really mind boggling. To win, both, the NY Pro (former NOC) and the Arnold Classic in the same year, is unheard of. I don’t think the historians in the sport can point to another man who has held this distinction. If Walker were to win the Olympia, he would have won the sport’s 3 biggest titles, all in one year, which would make him, arguably, a candidate for being the new GOAT. And although suggesting Nick could win the O, just three or four days ago, might have seemed premature and fanboyish, today, it’s a perfectly sound question to pose. When you win the NY Pro, you’re a serious contender, but when you win the Arnold, a strong case can be made that said person is the #1 contender to the Mr. Olympia. As of right now, the only two men who can be said to be the #1 contenders, would be 2020 Olympia Runner-up Brandon Curry and 2021 Arnold Classic Champion, Nick Walker. Crazy, huh? Crazy, indeed!!

Now before we pump up this win even more, I would be remiss if I didn’t point out that 2x Arnold Classic Champion (and my prediction to win) William “The Conqueror” Bonac was prevented from competing because of travel issues. While America seems to be in the clear when it comes to Covid 19, international travel restrictions sidelined foreign competitors like Bonac and France’s Lionel Beyeke. Lionel is another guy, who at 100%, may have stopped Walker. While Lionel’s chances are far more speculative, given his rollercoaster like preps, it’s safe to say Bonac would have hit the nail on the head, had he competed. He was also showing a lot more of his physique on social media, he was far more vocal than in the past, and he would have clearly been in the Top 2, with minimal effort.

The fact is, if Bonac competed, Nick probably wouldn’t have won, but we also don’t know that for sure, either. Walker desimated the competition. The fact that he looked better for the night show, makes the case ironclad. He was posing hard and had complete control of his breathing with zero distention. The fact that the judges put him and runner-up Steve Kuclo through the mandatories several times, shows the level of preparedness that Nick brought to the stage. He was executing the poses perfectly, he wasn’t rushing through them, but he also wasn’t moving at a snail’s pace. His coach, Matt Jensen, was with him the whole way. You could hear him from the stage and it seemed like Nick canceled everyone out, but him. The team these guys have made, has (already) seen them reap massive benefits during a very short run. The truth be told, more and more people are making the comparison between Walker and guys like Dallas McCarver and Justin Compton.

In a very real way, Walker is on his way to challenging the biggest giant in the land, Big Ramy. And perhaps the greatest plus to Nick’s win in Columbus, OH, is what he told Siddique Farouqi of RXMuscle, and that is: “I can stand with anyone.” That’s bigger than a title, it’s bigger than prize money. The fact that the reigning Arnold Classic champion has the self-confidence to go to Ramy’s house, in front of millions upon millions of bodybuilding fans, and challenge the big man for the biggest title in the sport, says a lot. If Cutler had had the confidence that Walker has today, back at the 2001 Mr. Olympia, he would have halted Ronnie Coleman’s run. The question now is, can Big Ramy stop Nick Walker? Can anyone?

I can stay that I was never a Walker fan boy. I wasn’t a hater – by any means – but I believed that his hype had to be proportionate to what he’d done on the stage. It’s very easy for media outlets and writers to get carried away with hype. I try my best to write, based on reality, but the fact is, the time has come to give Nick Walker the respect reserved for a Top Bodybuilder. While his goal, may be humbler than what most expected (gunning for the Olympia Top 4), I think he’s in the running to win the whole thing. That being said, he may not want to add more pressure on his shoulders than what’s already there; he may also not want to jinx himself. That being said, the writing is on the wall; Nick Walker may very well win it all. Afterall, we can say it’s all about physiques and we can say it’s all about the scorecards, but do hype and momentum account for anything? Of course they do.

Where do you see The Mutant placing at the 2021 Mr. Olympia? Do you think he’ll place Top 4 or do you think he’ll win it all? The fact of the matter is, I think Walker is a shoe in to win the People’s Champion award and I think the judges will want to put him side by side with Ramy, if for anything else, to bring the house down.

The level of interest we’ll see in the coming weeks, marked by the final days, will undoubtedly boost ticket sales and pay per view numbers. Not only is Walker going to increase interest in the event, but his overall positive outlook may even make other events within the Olympia Weekend (e.g. the sometimes dreaded press conference and the Sunday Champions breakfast) upbeat and uplifting. When you have athletes who get along and actually like each other, you have the makings of a truly great contest. After all, bodybuilding should be fun and entertaining.

I think we’re in for one heck of a ride, folks!

Newer Post
Is Obesity Contagious? An Argument Why It May Be
Older Post
What If Nick Walker Wins The Arnold?