Newer PostRetro Fitness Pushes Deal for Those Who Get Vaccinated
Older PostSupplement Industry Jobs: If You Love What You Do, Would You Ever Retire?
Share on FacebookShare on TwitterShare on LinkedinShare on Pinterest 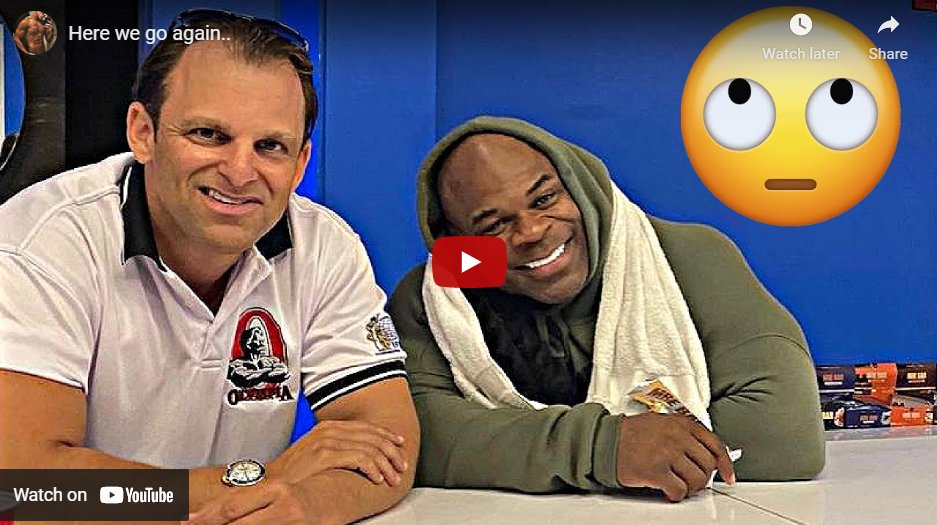 I’m sure when Nick reads this article, he won’t be happy. I just hope he doesn’t block me on Instagram. Oh wait, he’s already done that. I’m not 100% sure why, but I’m a journalist in the fitness industry and he’s the most popular Youtuber. Anytime a content creator releases content, they should be ready, not just for the accolades, but for the criticisms – constructive or otherwise – as well. Nick, like his mentor/predecessor Luimarco, doesn’t take well to any blowback. A couple years ago, I tried to be the bigger person, and tried to mend fences when our mutual friend Hector Mendoza of Muscular Development, introduced us to each other at the Mr. Olympia. We shook hands, chit chatted a bit, and everything seemed cool. Well, that didn’t last long. A few months later, I noticed I was blocked again. Oh well, that’s an aside for the world, but I felt it necessary to include.

“Here We Go Again,” was probably one of the harshest critics of Kai Greene in years. I don’t even know if harsh is the right word. Nick’s all over the place. He raises arguments based on Kai leaving his supplement company to sign to Redcon1 and speculates about competition clauses. Then he talks about how if Kai won’t come back, he will eventually become “one of the most disliked people in the industry.” Nick seems to spend considerable time on a meeting The Predator had with Mr. Olympia COO Dan Solomon. Nick also has interesting arguments relative to Phil Heath’s comeback and Big Ramy’s special invite. So here’s the question, was this video fluff or facts?

In many regards, this all seems so silly. The fact that a grown man, a New Yorker, no less, would care about what some kid in his garage is saying, seems a little funny. Surely, superstars are on another level and don’t pay any mind to the media; especially, if you’re dealing with a hostile channel or personality. Then again, each and every sport has media – and – each and every athlete needs to deal with the reporters that really take it to the teams/athletes. I definitely don’t put Nick Miller in this category of fearless journalists – but he certainly tried to play that role for the video in question. Every sport has its own crew of Ariel Helwani’s or Charles Barkeley’s; they all come at you differently, but they’re all about pushing the card, getting the athlete to leave their comfort zone, and be real with the fans. The ultimate goal is breaking the story, getting down to the truth. Like I said, admirable performance by Nick, but ultimately, not very convincing.

For starters, Nick spent a considerable amount of time talking about Kai Greene leaving his supplement company and signing to Redcon1. As he did when it happened, Nick went to great lengths to describe the move as being a step up, almost like another crowning achievement in Greene’s already impressive resume. Of course, he never raised the business angle. What if Kai’s company wasn’t doing well, what if they weren’t performing optimally, and/or what if Kai’s going to Redcon1 was simply a way to keep him on board, but maybe do something different with his company? Again, we don’t know, but why only shine the light on one potential possibility?

Nick also talks about competition clauses and how Kai’s contract may have been contingent on him competing. Now, to the average bodybuilding fan and mainstream onlooker, that might seem quite plausible. There’s countless athletes battling for contracts. Times are tough. Back in the MuscleTech/BSN heyday, everyone was getting signed, everyone was making big money, and content-hungry media outlets mobbed the stars. Today, it’s a whole different world, especially with the chaos of Covid and the all but certain death of print media. Companies have a lot more influence than before and most athletes who are simply trying make a living, might cave, but Kai Greene? Are you kidding me, here, Nick? Are you kidding your 1+ million subscribers?

Nick, do you honestly think KAI GREENE will be forced by any contract to compete at a show? Do you really, honestly, think Kai Greene would do something like that? You’re talking about the most popular bodybuilder in the world. He’s always been bigger than Phil, he’s bigger than Jay, and he’s way bigger than current Mr. Olympia Big Ramy. Kai is also an established actor, content creator, and business executive. Greene brings undeniable starpower to the table and he’s worked his whole life to build his name, protect his legacy, and make all the right business decisions. While he could have signed a contract with provisions such as those Nick alludes to, I think the much bigger reality, is that Kai would reject such clauses. I highly doubt he’d forfeit his right to choose whether he competes or not. And the fact Nick even brought it up, will make countless of his subscribers believe it, especially because Miller strategically mentions his affiliation with the RC1. It’s a handy namedrop that Nick likes to use to give his arguments a little extra punch.

The Kai Greene / Dan Solomon meeting and photo could have been just that. It could have been like the meeting and photo they had in New York a couple years ago. These guys are old friends, Kai has been part of Olympia productions, and in an age dominated by smartphones and social media, what’s the big deal? Two friends met, maybe had lunch, and took a photo together. Who cares? Plus, it’s not like it’s the first time it’s happened. And like I said, Kai has a lot to offer, so if they met and they discussed the Olympia, it wouldn’t necessarily limit Kai’s role to competing. What if Kai will become part of the Olympia Team, what if Kai will have a major role in the expo, and/or what if he was to co-emcee or present an award? I mean, honestly, there’s any number of things these two guys could have talked about. And yes, it’s possible they discussed a comeback, but to go from that to the video in question, is a pretty big stretch.

What I also found interesting, was all the talk of special invites. You all know where I stand with that. Nick said all the right things here; the practice has become somewhat questionable. I mean, especially, when for the first time in HISTORY, the guy who won the Olympia DID NOT QUALIFY. I mean, that’s gotta be one of the lowest points in the history of bodybuilding. I mean, here we are, always trying to impress the mainstream with our sport, but in 2020, the guy who won the biggest title basically got invited to the party?!?!

Could you imagine a team just being given the chance to compete at the World Series, the Super Bowl, or the Stanley Cup? I mean that’s laughable, right? But in bodybuilding, it actually happened. Anyways, it could just as easily happen again, IF, Kai got the invite. I mean let’s be real here, at 100% Kai Greene dusts Big Ramy and pretty much every other bodybuilder on that stage. I mean, my God, there were years Kai beat Phil. He may not have beat him on the scorecards, but he beat him. Public Opinion doesn’t lie and it’s been consistent for nearly a decade.

What bothers me, isn’t that Kai likes to tease the fans or that media outlets want to pressure him, but this video struck a nerve. It’s a little too much and it would only be ok, if Kai had been consulted first. Otherwise, it just seems too personal and almost too below the belt. In any event, that’s just my take. And I also didn’t break down the video any further, because ultimately, the determination of what’s “too far” is purely subjective. In the end, this article will probably drum up some extra views for Nick, but I suspect that when real bodybuilding fans see it, many will agree with me.

For the record, I don’t think Kai will come back, but if he ever does, it will be on his terms, not because of a contract clause.