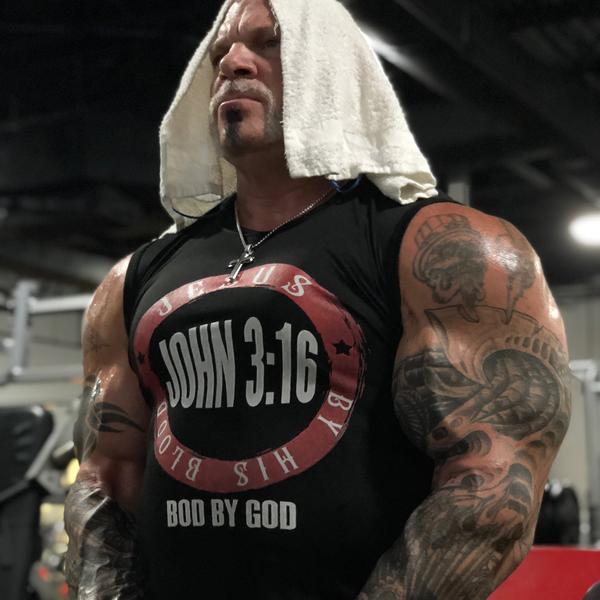 You talk about faith, you think of Mel. You talk about loyalty, you think about Mel. You talk about bodybuilding, motivation, helping others, and leading by example, you think of Mel. Mel Chancey has lived the life of ten men, he’s looked death in the face and laughed, but he’s also humbled himself before his Maker and was able to totally change his life. He went from being someone you’d never want to run into in a dark alley, to the guy you’d want to have your back. He’s been a great friend to me and he’s helped friends of mine, directly, in situations where had he not intervened, things could have gone south in a very real way.

Although I don’t see myself doing contest coverage now or in the foreseeable future, I was able to see a lot during my run and that included, seeing Mel in action. His efforts only increased the amount of love and respect I have for the guy. He’s a man’s man, respected and loved by his peers, from legendary bodybuilders, company CEO’s, promoters, officials and press. In this article, I’d like to talk about a guy who more people should know about – the one and only – Mel Chancey.

I first met Mel at the 2013 NPC MId Illinois Championships; I was there with RX Girl Editor in Chief Gail Auerbach, learning the ropes of covering a bodybuilding show. Up until that point, my interviewing skills were pretty green. I did local things in Lansing and throughout Michigan, but on a very small scale. I’d been doing this and that since 2008 when I launched StrengthAddicts, but I needed a lot of work. By this point, I could say I was a Mel Chancey fan. I knew of him and loved what he was doing with Dave Palumbo and RXMuscle.

From 2009 to around 2012, the bodybuilding scene online would be almost unrecognizable by today’s standards. There was no Instagram, YouTube was still very much unchartered waters for most, and the magazines were still (somewhat) ruling the day. Back then, quality is what people wanted; they didn’t go for clickbait, they didn’t go for popcorn headlines. If you’d lived life and knew something, had something to say, you’d have an audience. This is why I was a religious fan of Mel Chancey’s The Final Verdict, it was a show that was about more than a couple panelists hearing themselves talk.

Mel has always had a strong message and I believe the motorcycles, bodybuilding titles, and the contests he promotes, among other projects, are simply vehicles to get his message out to the masses. If all he wanted to do was make money, he could do so a lot easier and faster, than putting his blood, sweat, and tears into the fitness industry.

When you first hear about Mel, it’s easy to make all sorts of assumptions about who he is or what he’d be like to talk to. I still remember one of the first stories I heard about him. It involved being in the middle of a street war, pliers, and some guy’s teeth. It’d be something if the story were told by a hater or a troll, because then you’d know it was probably bullshit. The same would be the case if it were reported by some tabloid media outlet; however, Mel was the person telling the story. And the war in question? That war was widely documented and is a matter of public record in The Windy City. Not only did everyone know about it, no one would ever want to relive it. If this war had gone any longer, it would have made Chicago resemble Belfast during The Troubles.

In any event, when a guy talks about the things he did, almost as if recollecting it from another life, that’s when you appreciate the fact that men and women can change their lives. For some, it’s all about an internal will to succeed, but for others, there’s a Greater Power at play. I’m not here to evangelize or convince you that God exists, but I can tell you there’s no question in Chancey’s mind, and even less upon his heart. The truth is, I think God put very important people in Mel’s path, people who were able to help him choose a different path.

Ultimately, the decision to change, was his own, but unlike many who claim to have changed, yet can’t seem to stop marketing themselves off their past (e.g. reformed former LCN members on YouTube, former jailbirds milking and glorifying their jail stints, and/or former gangbangers reminisciing about how they used to run entire cities), Mel has been able to focus on fitness, longevity, and prayer. If you watch his videos, listen to his podcasts, or talk to him in person, you’d be hard pressed to cite any instances when he name drops clubs, people, or things he did during his club days to elicit a response, let alone recognition. He doesn’t need to do that. He’s a self-made man who has years of living right to show for it. That’s truly noteworthy. I mean anyone can talk, anyone say they’ll do this or they’ll do that, but to actually practice what you preach and travel on the straight and narrow – that’s reserved for the truly hard working and enlightened.

Another quality that truly epitomizes my friend, Mel, is loyalty. Mel is loyal to a T, when it comes to the NPC, Jim Manion, and his friends in the sport. Earlier in the article, I mentioned how Mel went to bat for someone very close to me. That situation involved another club and my friend reached out to him, hoping he could sort things out. Although Mel left his old life long behind, he’s still the kind of guy you respect. He doesn’t need to read you his resume or show you his ink. When he approaches you, he does it in an old school kind of way, in a way that’s, honestly, lost upon many youngsters today.

Tough people, truly, tough people, don’t need to get loud, use profanity, or dance around like fools, to get their point across. They say what needs to be said, in a respectful but straightforward kind of way. They make their point, listen to the response, and go from there. Things get worked out and people move on. It’s not done over DM’s or text messages, it’s not done from opposite sides of a street or from moving cars. If a man needs to talk to another man, it’s done face to face, with mutual respect. That’s old school and believe it or not, more beefs would get ironed out, if only people subscribed to that way of doing things.

As a result of being a man’s man, Mel has done very well in the world of bodybuilding. While he wears many hats, he’s one of the few people who everyone claims as their own. Competitors trust him, promoters know he can get the job done, and the officials know that when something needs to get done, if Chancey says he’s got it covered, he’s got it covered. He doesn’t need anyone to hold his hand or remind him of what needs to be done. Further to that point, I can tell you that Florida is one of the most important states when it comes to contests and promoting the sport to the world. Having him there makes all the sense in the world, and it’s probably a major reason why everything runs so smoothly in the Sunshine State.

All in all, if you don’t know Mel, reach out to him – and – if you’re lucky enough to call him your friend, be thankful for that. When it comes to making real friends in this industry, it can often be a lot easier said than done. Bodybuilding makes showbiz seem like a cakewalk, it makes Wall St. look like child’s play, and it even gives reality tv a run for its money. That being said, when you make a real friend, here, it can be a total game changer. If you have enough real friends and you work hard, then the sky’s the limit.

Kudos to Mel for being a great friend and a driving force in the world of bodybuilding and fitness.

Newer Post
What More Can Be Done to Protect the Health of Americans?
Older Post
Risks of Bodybuilding: Are You Willing to Jeopardize Your Future?