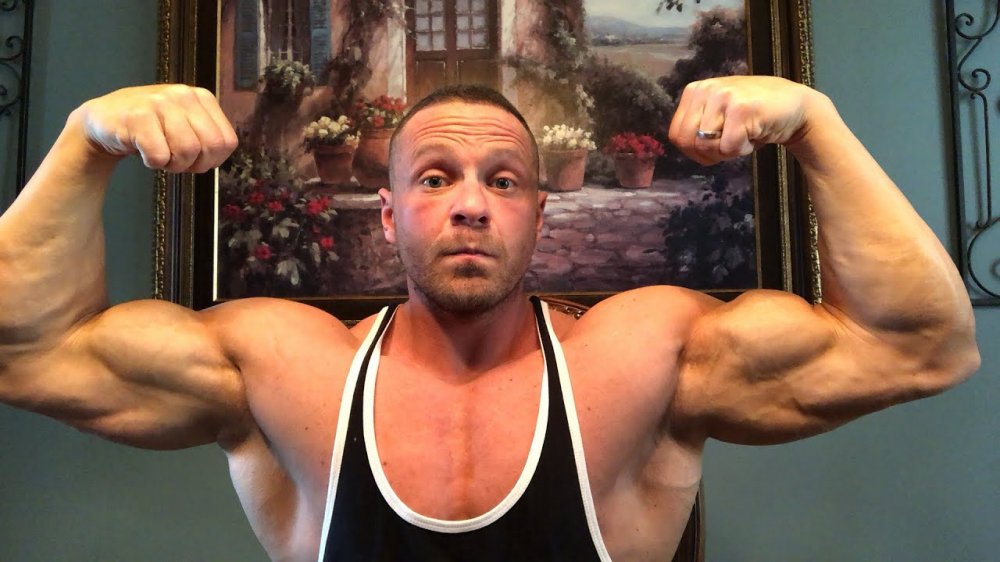 You know you’ve made it in the fitness industry when you’re a living, breathing, brand. Marc Lobliner has long transcended the role of competitor, coach, and/or business owner. He’s been a driving force in social media, even before it was formally classified as such. Imagine being an influencer before the category existed. He’s a pioneer on YouTube, putting out videos that earned him a lion’s share of the fitness audience when the platform was in its nascent stages.

Perhaps the only others who can look back at numbers like that, back then, would be Jerry Ward, The Hodge Twins, and maybe a handful of others. Everyone else has either long moved on – or died.

I mean, back when Rich Piana ruled the bodybuilding world, Marc was right up there, getting truckloads of views, battling with an endless number of trolls, and even having his own run-ins with Jason Genova, keyboard warriors, and racists who attacked him for being Jewish. He’s seen it all and like most celebrities, he has yet to meet an actual hater in person. That being said, he’s evolved from the days when he let toxic people get to him. His outlook, today, doesn’t allow the bullshit to get to him. He’s got way too much going on. He has a great wife, a great family, and what he’s been able to accomplish business-wise, puts him in an elite class of super successful people. He’s well liked and respected by the people that matter. And there’s certainly a lot to read in between the lines with the latter.

When it comes to the real movers and shakers, they know who this guy is, what he can do, and they value him. Whether it’s philanthropic or profit-driven, IT’S NOT A GAME, when Lobliner gets involved. This is why I think he’ll be great in whatever role he plays.

Marc and I disagree on a lot of things. Politically, I’m a leftie with very, very few (but still real) conservative leanings. He’s not exactly a conservative in the formal sense; I’d say (and he would concur) he’s more of a libertarian, but that would only do him justice in some regards. When it comes to some political issues, he is, in fact conservative. People like Marc (and myself) don’t do well when forced into little boxes. I like to have an opinion based on each individual issue. I don’t think either of us has any particular loyalty to any particular political party. For example, there’s folks who block vote on everything. You could, hypothetically, put a picture of a frisbee on a senate race and they’ll check the frisbee over a human, just because it was red or blue. That’s not an informed voter – it’s a robot. We’re free thinking individuals. But there’s more to be said.

Lobliner is about so much more than muscle. There’s nothing wrong with being a meathead. We’re all lunkheads on some level. I could easily spend an afternoon talking about bodybuilding, nutrition, and gear. While I’ve never used it, I know a lot about it and I don’t mind admitting, I love talking about it. But for some, these are the only topics of conversation they feel educated enough on, to discuss with anyone they come across. With Lobliner, the options are far greater. He can talk to you about buying your first home, making yourself financially solvent, or taking care of your mental health. He’s a guy who doesn’t just say “thank you for your service” to military personnel, for example, he shows them respect year round. He doesn’t just love America on the 4th of July – he loves it 365 days a year. There’s no gimmicks when it comes to who he is and what he believes in. These are qualities that I think are essential to an IFBB Pro League Pro.

I want pro’s to be about something, to stand for core values which I think have been lost over the last couple generations. I’m not here to tell you how or why societal values have eroded, but I think you’d have to be some kind of an idiot to think they haven’t. I think we need more role models in sports, movies, and just life in general. I think that an adolescent getting into physique-based sports, who looked to Lobliner for how to act in life, would do pretty damn well for himself.

Why do I think Lee Haney’s reign was so awesome? Why did I write so many articles about the short but inspiring reign of Mr. Olympia Brandon Curry? These Mr. O’s were faithful husbands, active fathers, and pillars in their communities. And when I say their communities, I mean just that. They were local leaders, they were active parents, and they included that with promoting bodybuilding. They were about something, like Marc is; something more than just building muscle, grilled chicken breasts, and mixing up protein shakes. Again, there’s absolutely nothing wrong with that, but if you aren’t about anything more than that, I don’t know that you’re role model material. And that’s not to say that these guys’ lives are perfect. In fact, far from it. If you follow Marc’s journey, he’ll tell you that he’s had to work on relationships, both personal and professional. Nothing has been a cakewalk, but when there’s a will, there’s a way. And it’s not about catchy phrases, either. Not everything boils down to marketing, but if you want something, you’ll stop at nothing until you realize it.

Take the IFBB Pro League pro card. This is something Marc wants and he’s willing to fight hard for it. He’s already a NABBA Pro and while NABBA may not be what it once was in America, it continues to be a powerhouse worldwide. All the greats competed there and if it were simply about being a Pro Bodybuilder, that NABBA card would more than have satisfied that desire. It’s still a very much impressive feat, with a well-respected organization, but it’s not the card that leads to the Mr. Olympia. The Olympia is the superbowl of bodybuilding – there’s no other contest like it. And without throwing any shade at other organizations, it’s widely known that the NPC is where the best of the best amateurs compete. It’s also widely known that the IFBB Pro League is where the best pro physique-based athletes compete. There’s simply no comparison. And for a guy like Lobliner, who has always prided himself on being the best, he will never give up, until his hand is raised as the victor and he can put the title of IFBB Pro before his name.

Lobliner also has a history with the NPC Masters USA’s. It’s a very new contest, so new that this is only it’s second year. Marc had prepped for the 2020 inaugural event and he had every intention of jumping on stage and getting the card then and there. Unfortunately, life and it’s many obligations happened. Instead of calling it quits, he threw his hat into the 2021 NPC Masters Nationals, the biggest show in the NPC. This contest, held in Pittsburgh, PA, draws out a who’s who in the sport, including Pro League President Jim Manion, VP Tyler Manion, and photographer extraordinaire J.M. Manion. But before he could even do this contest – he had to qualify. Although he was eligible for the 2020 Masters USA’s, this was 2021, but not a problem. Lobliner qualified and made his way to the most important city in bodybuilding, today. He jumped on stage, looking very impressive, and snagged an impressive Top 3. And while this may have been it, for some, Lobliner was just getting started. Although he officially stated he was done for the year and would be back in 2022, he never got out of contest shape. If anything, he got better with time, posting photos, seemingly, just for fun. By the time he announced he was doing Masters USA’s, it was pretty much obvious that he was going to make another run for the pro card.

As of press time, we don’t know if Marc will win his pro card, but we know he looks amazing, true to his word. He said he’d come in with “saran wrap condition” and that he did! The judges have expressed their approval and the fans are publishing posts and stories that show The Machine in tip top shape, on stage. Whether he turns pro at the 2021 NPC Masters USA’s or whether it happens later, isn’t really the point of this article. What is the point, is that Marc would make an amazing IFBB Pro League Pro and that he is, precisely, the kind of role model that bodybuilding needs.

I am so proud to call Marc Lobliner my friend and wish him nothing but the best life has to offer. He’s already won in my book!