Kai Greene vs. NSP VERSUS Eminem vs. Machine Gun Kelly 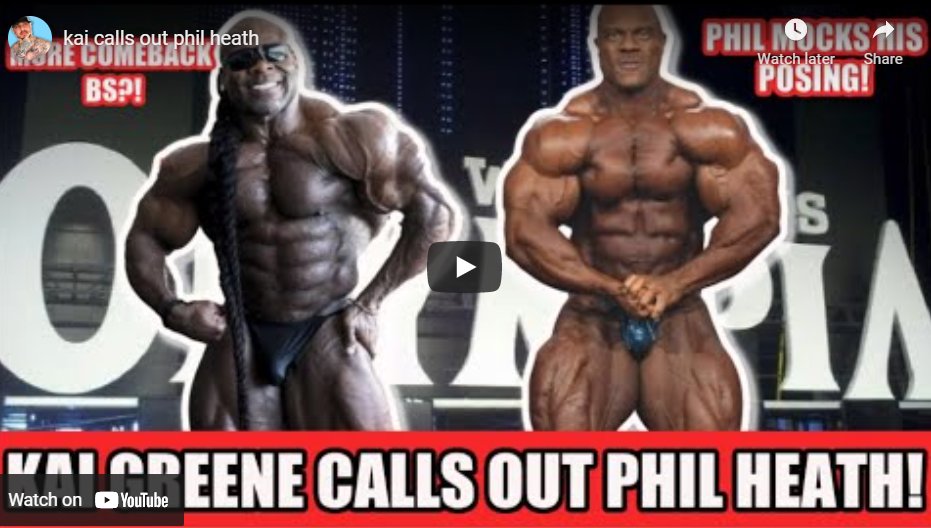 What a funny world we live in where people need to make content in order to put another person on blast. I remember listening to the back and forth between Eminem and Machine Gun Kelly on various tracks and social media posts, and now all of a sudden, I’m experiencing deja vu with the drama between Kai Green and Nick’s Strength and Power.

Just writing this article, I feel like I should put Eminem’s Killshot on and follow it up with Machine Gun Kelly’s Rap Devil and just put them on loop. But seriously, this whole Kai Greene and Nick’s Strength and Power “feud” is like an underground rap battle with both rappers blasting the other and not walking away from the mic.

Will the Real Bodybuilder Please Stand Up?

Ok, that’s a trick question and a play on words all mixed together like vomit on your sweater already, mom’s spaghetti (I have terrible dad jokes mixed with rap verses for days – but I’ll save you the pain of me continuing down that path).

But to be frank, go ahead and take a seat, Kai. Sit this one out like you have for several years now (you’re more than experienced at it by now). You like grabbing the mic and spitting a good game behind your Instagram account but have no intention of getting back on a bodybuilding stage. You simply like trolling your fans by posting “updates” as if you’re prepping for a show. I think it’s safe to say that the majority of the bodybuilding fans out there have moved on from you. They’d rather support bodybuilders who actually support their fans and get on stage.

The fact that you need to take a shot at a YouTuber like Nick’s Strength and Power shows just how desperate you are to stay relevant. I mean, what happened? What really happened that made you retire from bodybuilding competition without ever saying you’re actually done? Were you sick of Phil beating your ass? Was it a beef with AMI (who isn’t even in the picture anymore)? But now you go so low as to talk shit about a YouTuber (multiple times over the years) simply because he’s calling it just as I am right now, saying that you’re a social media troll.

With the Eminem vs. Machine Gun Kelly back and forth, it was at least entertaining and between two artists who both want what’s best for the music game and their fans. There’s nothing entertaining about a bodybuilder who quit on his fans, never won the Olympia, yet keeps trolling on social media as if he “should have come back” when talking about “weak lineups.” Either get on stage and win those shows if they’re weak lineups or sit down and keep your mouth shut.

It’s honestly annoying that here we all are, again, talking about Kai Greene. We all know he’s not going to compete.

Here’s where I’m at with this. From a physique standpoint, I tip my hat to Kai for maintaining his physique while working on other endeavors. Honestly, that’s admirable and respectable. If you look at many of the bodybuilders who retired and saw them today, they (for the most part) look nothing like they did on stage – Kai still does. So, I don’t want to take anything away from Kai’s love for bodybuilding and living the lifestyle. He just needs to end the stupid antics.

I think more people would respect Kai if he just played it like it is – he’s not coming back, but he loves to show off his physique. Just call a spade a spade. Why must you constantly hint at a comeback when you’ve been doing this same song and dance for years?

At this point, no one misses you on stage. You’ve burned too many bridges with your fans. They’ll follow you as a personality and stay up on what’s going on in the life of Kai, but they’re not there sitting on the edge of their seat and hanging onto every word that you speak or put on social media about the possibility of a comeback.

At this point, anyone who thinks you’re coming back is being played for a fool – but that’s kind of what you want, right?

The social media posts and comments are nothing more than Kai toying with his fans. He knows exactly what he’s doing. The issue is, I believe he’s having a hard time letting go of the sport and focusing solely on his other endeavors as his look, and his career as a bodybuilder is what he’s been known for and made him the personality that he is today with a massive following.

Each year I feel like a broken record, sitting here beating a dead horse talking about Kai Greene. Nick’s Strength and Power has even finally given up hope of a Kai Greene comeback and is sick of his antics now as well – which is probably part of the reason Kai wants Luimarco to come back and called Nick “boring.” Well, Nick has, if not the largest bodybuilding YouTube channel, at least one of the largest bodybuilding YouTube channels out there.

“Love the Way You Lie”

There’s another twist that could be happening here, but I think it’s unlikely. Just like how Eminem had Rihanna featured on his song, Love the Way You Lie, could both Kai and Nick be in on this together to further expand their audience? Kai talks about Nick to give him some attention, and then Nick returns the favor by talking about Kai to help Kai stay relevant? Essentially, they are both lying in order to get something in return? (Follows and clicks)

I don’t know. Regardless, all I know is, I’m absolutely sick of talking about what’s going on with Kai Greene on social media and him (and his sponsor) hinting at a comeback. It’s been years talking the same nonsense. People would respect Kai more if he just came out and said he’s done, but he would love to continue engaging with his fans and providing them with content. The end. That’s all he would have to do in order to end this bad taste he’s leaving in everyone’s mouths. But will he ever tell the truth? Probably not.

Newer Post
Did Big Lenny Really Break A Bottle On His Head?
Older Post
What is the Perfect Physique?