Is Nick Walker the Future of the IFBB and an Olympia Champion? 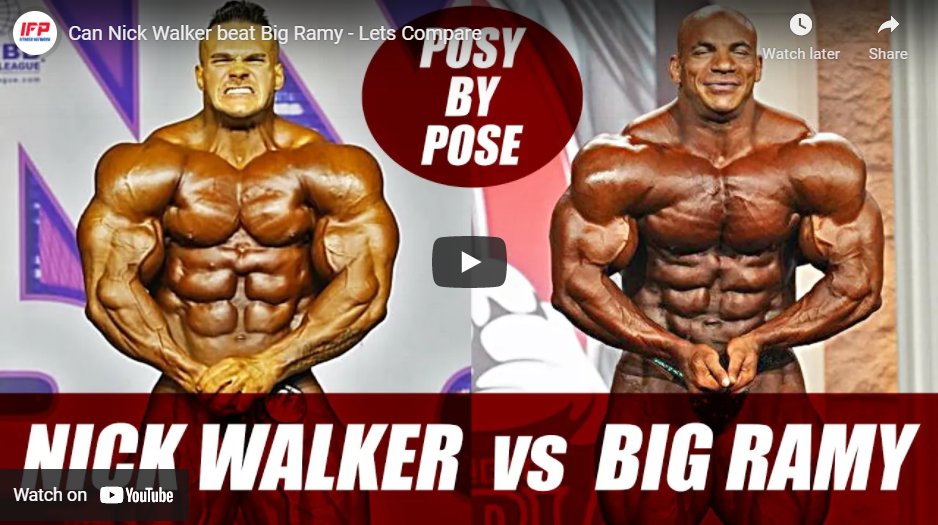 The hype train was already moving pretty fast down the tracks back when Nick Walker was commanding the NPC, but as an IFBB Pro, the jury was out on how well he would fare.

In 2020, Nick Walker made his pro debut at the Chicago Pro, where he placed fourth. Some people claim he was robbed, and they may have some valid points to makes as to why he should have been placed higher, but that’s back in 2020 – a year we already want to completely forget about.

We have all witnessed the Nick Walker and Blessing Awodibu “beef” leading up to the New York Pro, but things didn’t exactly play out how the drama was being driven.

When the pre-judging photos were released on the internet and social media, it was hard for me to look at Nick Walker and not think that this man isn’t human – I’m not even joking. The dude is 26 years old, and from the look of his physique, you’d never assume he’s still “new to the game” of bodybuilding.

While Nick got somewhat caught up in the back and forth with Blessing Awodibu, Nick was probably looking around the New York Pro trying to find Blessing since he didn’t really see him on stage. Needless to say, Blessing wasn’t anywhere close to the first callout, and his physique looked amateurish when compared to those in the top five of the New York Pro.

Nick Walker came into the New York Pro ready to get the job done. He had a game plan, he executed, and took home a BIG win to kickstart his 2021 bodybuilding season. However, the New York Pro may be the only time we see Nick Walker until the Olympia comes rolling around. And while I criticize bodybuilders who only hop on stage 1-2 times a year, in Nick’s case, it’s probably the best thing he can do in order to put himself in a position to contend for the Sandow.

After seeing the pre-judging photos, it was clear in my mind that Nick Walker literally just walked away from the show with the win. I didn’t even care how he showed up at the night show or how the other competitors looked – there was no way he was losing the show. He was that far ahead of everyone else’s physique, in my opinion, that he could flatten out and still take home first and a nice paycheck.

It wasn’t long after his win that images started to surface online of a side-by-side photo of Big Ramy at the 2020 Mr. Olympia and Nick Walker at the New York Pro. Many claim Nick looks better but does he really?

Does Nick Look Better Than Big Ramy from the 2020 Olympia?

I stumbled upon a video from IFP Fitness Network on YouTube that put together an amazing side-by-side comparison of Nick Walker and Big Ramy going through all the poses. If you haven’t seen it, I highly recommend you take a peek at it. I’m going to mention my opinion of the various poses and see if I’d give the nod to Nick Walker or Big Ramy.

From the front, if you look at the front double biceps pose, you can argue that Nick Walker looks better. He has insane musculature, deep cuts, and muscle separation, a good midsection, much better calves than Big Ramy, and overall, I’d say, a better look from the front.

The front lat spread really shows Nick’s thickness. His upper body looks cartoonish, but at the same time, he looks overall bigger than Ramy in the pose, which also exposes his midsection being slightly bigger than Ramy’s. I’d give the nod to Ramy in this pose as it’s more aesthetically pleasing.

In the back double biceps pose, it’s literally a coin flip. They are very similar in size and structure. Nick has a better lower back, Ramy has better glutes, Nick has better calves, and both have insane definition in the lats and traps. In this pose, I’d actually say Nick has better arms and even shoulders. The nod goes to Nick.

Rear lat spread, I would give everything to Nick Walker (maybe not glutes). Nick looks wider, has more muscle, and even better legs (which sounds wrong considering how big Ramy’s legs are).

Side chest I would give to Big Ramy. Let’s be honest, from the side, Ramy has alien legs. The muscle separation from the side pose looks truly insane for Ramy. I don’t know anyone who can beat Ramy in the side chest pose when he’s conditioned.

Looking at the most muscular pose, both Nick and Ramy look great. Standing next to other competitors, this pose would dominate most line-ups. However, in a side-by-side comparison, I’d give Nick Walker the nod. Nick looks significantly bigger than Ramy in this pose, and he has better muscle separation and detail compared to Big Ramy as well.

I need to reiterate that my thoughts and opinions are coming from photos. Lighting is different (better at the New York Pro) as well. But overall, I think I’m more excited to see Nick Walker at the 2021 Olympia than I am anyone else. That said, I can’t help but look at Nick and see Dallas McCarver. Nick is an incredibly talented bodybuilder who I see being the face of the IFBB soon. Allowing himself a few months to train and get ready specifically for the Olympia could be dangerous for those in the Olympia line-up – including Big Ramy.

If Nick Walker brings his pre-judging conditioning to the Olympia stage, he could very easily walk in and secure a top-five placing, if not potentially win the whole thing. Granted, we didn’t see Nick next to guys like Ramy, Bonac, Phil, Brandon, and even Flex Lewis. But overall, this dude has one hell of a career in front of him. He turned me into a believer.

What do you think? Check out the video and let me know who you think would win between Big Ramy and Nick Walker down in the comments.

Newer Post
Masks vs. Movement: Which Can Better Protect Americans Health?
Older Post
What’s A Sponsorship – And What Is NOT!!