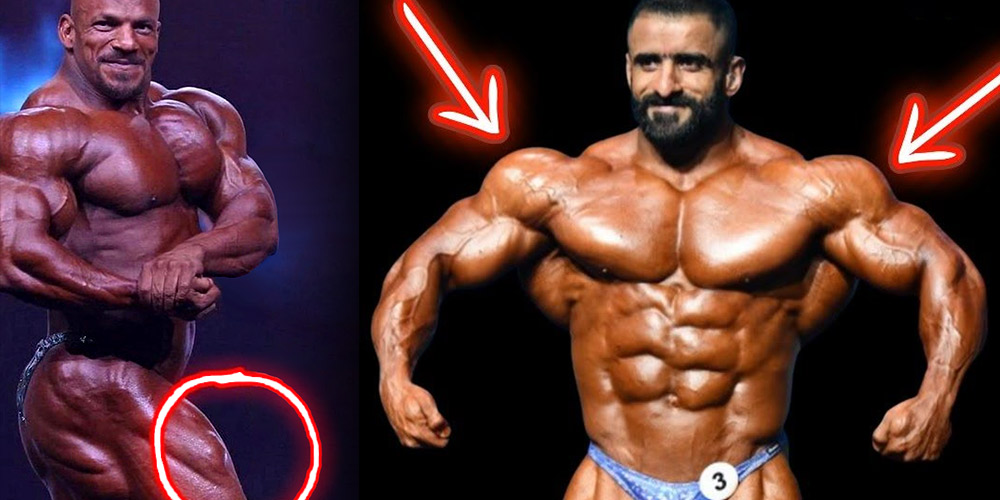 Just a day after Kevin Grech’s EvolutionOfBodybuilding.net released a couple of extremely questionable Big Ramy photos from the 2021 Mr. Olympia, bodybuilding fans can’t stop talking about what may very well have been a double standard. For weeks, viewers listened to the commentaries about Hadi and his allegedly “jimmied up delts.” The chatter seemed to have started with Chris “The Technician” Aceto at RX Muscle, but it certainly didn’t stop there.

Before long, many other Youtube channels and bodybuilding outlets were weighing in. Some argued The Persian Wolf was using synthol (a term that encompasses a wide range of oil-based fillers, from the high-end to the homebrews we see in the freaks from Brazil and Eastern Europe). Others, like hosts on the popular show, Bro Chat, seemed to think that whatever was in Hadi’s delts was something other than oil-based, perhaps a water-based product. Whatever the product may have consisted of, a growing number of talking heads seemed to believe that Choopan’s shoulders were so distracting that he it kept him from winning his first Sandow. All this talk seemed to have culminated with remarks by Robert “Bob” Cicherillo, the so-called “voice of bodybuilding,” who spoke at length about what the judges thought and that if Hadi changed his look, that winning an Olympia would be in his future. Of course, Chick had to quickly turn to damage-control, as major news outlets like Desktop Bodybuilding, Evolution of Bodybuilding, StrengthAddicts and Bodybuilding & Buillshit pressed him on whether or not he was speaking for the Federation, its judges, or simply, himself.

Although Bob was able to get in front of his trainwreck of an IG Live, the fans haven’t let go of the fact that Hadi was way harder than the bloated Big Ramy; he was way more dense, and posed far better. They want to know how the 2x People’s Champion was denied the title they believe he earned. These angry voices haven’t tamed and Choopan’ fans continue to clamor on Facebook groups, message boards, and various social media apps. These disgruntled voices turned even more hostile, as the EOB shots came out.

What we see in the photos, included with permission in this article, is what appears to be a very suspicious injection mark in The Egyptian Phenom’s leg. For Ramy, his legs are his calling card. Despite the fact he didn’t look better in 2021 than 2020 and the fact he was holding water, it was widely believed that it was his lower body dominance that sealed the deal on his much-contested win. But what if his wheels were as distracting as Hadi’s shoulders?

The people who criticize Choopan, criticize the look of the muscle – it’s not like he ever had suspicious injection marks. With Ramy, based on these photos, you can see the issue at hand, a mile away.

Did the judges see it? Did they give Ramy the win, despite it? Was Big Ramy judged the same way as Hadi was? And if Big Ramy was judged the same way Hadi was, didn’t make improvements, and was holding water at prejudging, how in the hell did he beat Brandon Curry, who was full AF, conditioned, and brought 15lbs of added muscle mass from 2020 to 2021? There’s just no logical explanation. Nonetheless, I’m dying to know what the rationale was. There’s simply no way the judges didn’t see this. It’s impossible. After all, it’s their job to scrutinize each competitor, especially at the Mr. Olympia.

One gripe I heard a lot about following the 2021 O, was the lack of comparisons between the top guys. Hadi wasn’t compared to Ramy all that much, Ramy and Brandon could have been posed more, and then there was that silly initial callout that wasn’t a first call out, before the first callout, that really serves no purpose but wear down the clock. Again, if I’m missing something, please enlighten me.

If, in fact, Hadi was judged harder than Ramy, that would be nothing more than a double standard. I highly doubt this is the case and here’s why. This is bodybuilding, not boxing. In bodybuilding, although subjective, the athlete with the best physique will win. There’s a lengthy process to test judging, then judging local NPC contests, then regional ones and then national-level ones. From there, judges can work pro shows, bigger pro shows, and then they’re at the NY Pro, the Arnold, and ultimately, the Olympia. No man or woman who gets to judge the superbowl of bodybuilding is going to miss anything this obvious!! They are constantly evaluated and their decisions are, more or less, uniform. There has to be an explanation when it comes to this, I just wonder when, if ever, we’ll hear it.

After seeing the EOB shots, I’m even more curious why Brandon was denied the Mr. Olympia and all the more adamant about calling him the Uncrowned Champion. Unless these photos are from a different athlete or from a different contest or were altered in some way, then the guy who was holding water and didn’t improve, was awarded a Sandow, despite some pretty gnarly site injection marks. The images being circulated not only show an injection point, but they show what looks like inflammation around it. I’m shaking my head in disbelief as I pen this article. If that was an SEO mark and judges didn’t care (BIG IF’s btw), then what would it have taken for Ramy to have been scored down? Was he going to retain the title no matter what? If that’s the case, that’s a pretty sad state of affairs.

Again, I have faith in the judges, but unless a statement is made, then people will be left to fill in the blanks for themselves. That’s usually not an ideal situation, especially given the fact that a 2x People’s Champion may appear – more than ever – to have been robbed.

I don’t agree with that at all. I wouldn’t be in the least bit surprised if Hadi had jimmied up his delts and I’d be equally unsurprised about Ramy potentially having oil in his wheels. My Olympia gripe has nothing to do with either of these guys.

The true Top 3 should have been Curry, Walker, with Bonac and/or Valliere. My main gripe is that Brandon Curry may very well have been robbed and these photos pretty much spell that out. The fact is, it’s been two weeks since the Olympia, and after scrutinizing every inch of Curry’s, Walker’s, and Valliere’s physiques, people keep scratching their heads at their placings. Meanwhile, more and more questions are arising about the favorites that, to date, have not been addressed by the judges or the Federation.

What do you think of the photos of Big Ramy’s wheels? Not only didn’t he improve from one year to the next, but what if he used SEO’s to give the illusion he was just as good? That’s pretty shocking. Again, we know that Ramy doesn’t do well when he plays the size game, yet, that’s exactly what he did. He won – on paper, but did he really?

Newer Post
The Reason for Your Lack of Results Could Actually Be Due to THIS
Older Post
What Should Nick Walker Do Next?