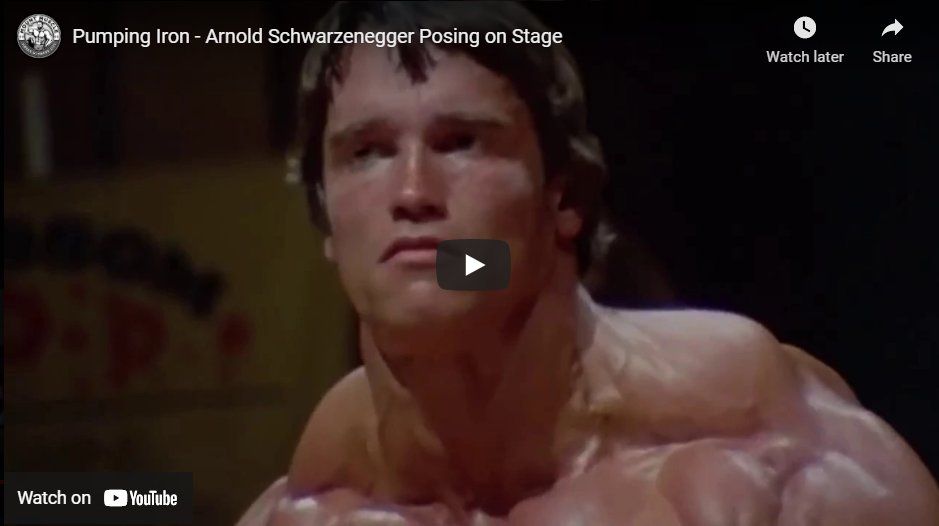 Physique-based sports are all about creating a look. That look can be real – or – it can be an illusion. Either works, but it’s all in the presentation. No one cares how strong you are. I’ve heard competitors say they’re the strongest bodybuilder, the strongest Men’s Physique competitor, or the strongest Bikini star. Who cares? The judges certainly don’t. And the fans probably don’t, either. Of course, it’s a great distinction to get yourself pumped up and it might make for some cool motivation clips on Youtube or Instagram, but it’s also a recipe to get injured and/or have your body fall apart. No, what really matters is what the judges see.

Each division requires mandatory poses. This isn’t so much about benefiting the athlete, as it is about moving people through, in an expeditious manner. After all, contests are a business, first and foremost. I know that thinking strips a lot of the romantic feel of competing in a sport, athletes all vying to be the best, but it is a money-generating pursuit. This is why time is of the essence. Venues actually care how long they’re used for. When one event ends, another starts. Therefore, everything has a timeframe. There’s a set time for putting a stage up, for the contest to take place, and for the stage breakdown.

Take a huge division like Bikini or Men’s Physique. You could easily be there all day and night, just for those two. This is why expeditors bring athletes on stage quickly, keep them all close backstage, and why at check-ins everyone is assigned a number and given a schedule. If the order of events isn’t maintained, it could spell chaos for the promoters, and result in a way higher spend that budgeted for. Time is of the essence for the promoters, but also, very much so, for the athletes. They have to make every second count, they have to look their best, and if they don’t, it could mean that an entire prep just went down the drains. Great posing and everything related to it, is absolutely critical.

Practice is key. Posing is just like lifting – it requires a lot of time. You need to become super familiar with each mandatory pose and in which angle you look your best. There’s a million different ways to do a front double bicep, for example. There’s the transition, where your feet go, how hard you pose and whether you lean forward or backwards. Do you grunt? Do you smile? Do you hold your breath or exhale hard? There’s a million different combinations – some of which may help you and others may not. The more you pose, the more comfortable you’ll be.

A lot of folks barely practice, though, so they get winded on stage. Remember, not all placings are night and day. Many times, contests can be very close and people can really bring their A-Game. In those types of situations, the head judge may ask for additional comparisons, keeping the competitors on stage for multiple rounds. If it’s that close, good judges want to be sure they see every angle. The integrity of the placings is sacrosanct and they want their decisions to meet any-and-all levels of scrutiny. Don’t forget, judges will get called out online. There’s no shortage of YouTubers and coaches who will sound off, especially over bad calls. Federations also don’t take too kindly to bad judging. I don’t care what organization it is, they all have oversights in place, and if judges aren’t scoring adequately, that may mean they’re not judges much longer. If the scorecards look funky, that casts a dark cloud over everything. Bodybuilding does not want the bad rap boxing has earned over the years. There’s boxing judges who will award a round to a guy who got knocked out. How can you win a fight if you’re seeing stars, perfectly laid out on the canvas?

The competitors who practice an hour a day – every day – get up on stage and can pose like it’s nothing. They’re not perspiring all over the place, they’re not cramping, and they’re not huffing and puffing. Take the 2018 Mr. Olympia, where Shawn Rhoden upset Phil Heath. By the time it came to the ab & thigh pose, Phil was dying. He was battling an injury, possibly holding water, and possibly out of gas. Meanwhile, Rhoden was entirely in his element. His color was great, he wasn’t sweating profusely, and he seemed totally natural. I say he seemed so, because after the contest he had to propped up by Chris Aceto and his camp, but on stage, he totally executed the look of tiptop shape and appeared cool, calm, and, even, excited. Phil looked like he was dying. The fact is, that most definitely factored in. It weighed on the scorecards, with the media, and most definitely with the fans. If you’re injured, you probably shouldn’t compete, but great posing can still allow you to place well and/or win. That’s the power it has. Even if you’re not 100%, even if you’re hiding substantial flaws, if you know what you’re doing, you can win by illusion. You could literally be falling apart, but if you’re an artist when it comes to your presentation, you can steal the show!!

Theatrics are not required, however. Great posing can be entertaining, but being entertainment, alone, does not make you a great poser. This is a lesson many have had to learn the hard way. I hate to be sexist, but this is really a point directed at male posers. Some guys get on stage and simply want to get a rise out of a crowd. Whether that be getting them to clap, laugh, or get them out of their seats.

You know how they say, there’s no such thing as bad publicity? Well, there is such a thing as a bad reaction. If people are pointing at and laughing at you, then you shouldn’t be proud of that. If you’ve built a quality physique and you’re wanting to be taken seriously, being looked at as a clown, is not the path to success. Remember, if you talk to the old-timers, they looked at muscle-building the same way a painter looks at oils and a canvas. No one laughed at Frank Zane, Bob Paris, or Lee Labrada. People stopped talking, they couldn’t keep their eyes off them, and they were simply left speechless. When they got on stage it was almost like a throwback to Daniel Larusso doing kata exercises on the beach with Mr. Miyagi. What I mean by that is, it didn’t matter if these guys were posing in their bathroom, on the beach, or in a hall in front of 2,000 screaming fans. The lights didn’t matter, nor did the fans, the judges, or the media. Their routine was very personal to them. They had practiced it so much, that it’s almost like they were in a trance. When you talk about tunnel vision backstage, those moments before you’re called on stage, multiply that by ten. That’s the kind of mental focus and the posing precision that was executed by the greats. Their successors tried their damndest to duplicate this wow-factor, some with headspins, others with break dancing or robotics, but they always fell considerably short of the mark. This is why I emphasize that great posing can be entertaining, but entertainment, alone, is not great posing.

Everything factors in. There’s many components that need to be perfected. Song selection is key. Guys who pose to songs full of explicit lyrics, turn off many. Remember, no one wants to be censored, especially when it comes to personal expression, but bodybuilding is a family sport. If adults need to take their children out because your routine crosses the line, that’s a bad look. And that’s provided the DJ doesn’t flat out reject your song from the get go. What the DJ might also do, is cut your song, and leave you posing without music. Remember, there’s a lot on the line when it comes to a contest and if you or your antics can hurt the overall production, you will most likely be dealt with. And I’m afraid to say, the buck doesn’t stop with you. If you have sponsors or you’re part of a team and you embarrass yourself, guess what? You’re going to embarrass them as well.

Song selection should also reflect the kind of posing you’re doing. If you’re posing energetically and you picked a slow, heartbreaking country song, you’re going to look like an idiot. You don’t necessarily have to be a choreographer, but even minimal effort, will show. If you just pick a random song, don’t practice, and don’t know how the song is structured, you’ll look unprepared. That’s also not a good look to have.

One of the most key lessons to really take to heart, is knowing the difference between the prejuding round and individual routines. Prejudging is exclusively for the judges. Keep your theatrics away – and that also includes your artistic transitions. That’s the time nor the place. The purpose of prejudging is for the judges to see you hit the mandatory poses in the allotted time. Don’t be late to the pose or think that by delaying the clock, you’re somehow getting a better look from the judges. If you’re the reason the round is running late, that’s most definitely not going to do you any favors. If you want to make the best impression, be known for following the rules, hitting the pose in time, and be reading to transition with everyone else. The more uniform the round is, the easier it is for the judges to do their job. And remember, the judges can only score what they see.

We could spend several hours talking about this. You could hit up a dozen posing seminars and still not know everything. This is why I can’t say enough about the value of great posing. If you compete, how much do you practice your posing?

Newer Post
Is Blessing Awodibu Not Living Up to the Hype? He Talks a Good Game
Older Post
Coffee: Better Than Pre-Workouts and Thermogenics?