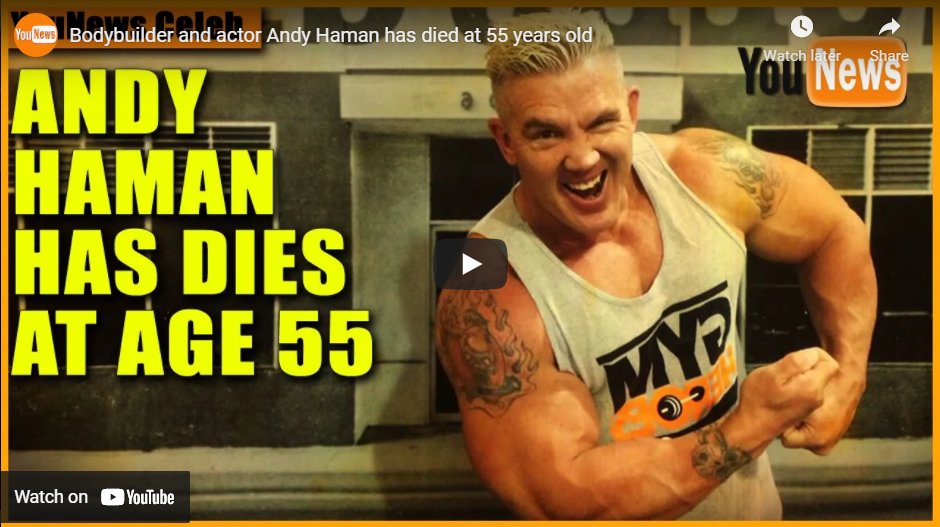 Andy Haman was one of the good guys. He was a real friend to me when I was first getting started doing event coverage. Whenever I’d see him, whether at the Arnold Classic or local shows, we’d always talk and share some laughs. He was one of the few guys whose personality, and overall demeanor, wasn’t affected by the camera. He was honest and goodhearted; he truly cared about his fans and he wanted to make a difference through fitness.

The Haman’s were all about healthy eating and longevity. I think a lot of people saw how strong Andy was, but many didn’t realize he’d spent a lifetime getting up to these impressive numbers. He incorporated humor as a way to cut the tension and keep things relaxed. Maybe the viewer was never going to incline press 500lbs for reps, but they were going to feel like they could, through hard work and perseverance. That’s what being a champion is all about; it’s not about flaunting what you have – whether that be material wealth, physical strength, or anything else.

Andy talked to his fans like one would talk to an old friend and that interaction, no matter how short, made a lasting impression. The conversations weren’t rooted primarily on chitchat; he wanted to know about your family, your trials and tribulations, and what your goals were. If, let’s say, you didn’t have any goals, he’d press you a bit, to see what it was you really wanted to achieve. That’s important. It’s important that celebrities care. Dymatize knew who they were getting. They had a guy who never asked for a contract, who did everything based on a handshake, and no matter how many times the company restructured, he always had his spot. I even remember telling him that that could be dicey, especially given how unpredictable the industry was becoming. But Andy invested all his faith into his word – and – their word. If he got burned, he got burned, but he worked his ass off and he always went the extra mile because that’s the kind of guy he was. Find me a guy like that today. They’re there, but in very short supply. The sport will miss Andy Haman.

The Arnold Classic Expo was IT for me. For 2013 and 2014, I really cut my teeth there. I had done little interviews, here and there, since 2008, but those two years in Columbus, OH, gave me the foundation for everything that would come. One of my favorite guys to interview was Andy Haman. When you have a superstar on that level, taking the time and showing the interest that he showed, that really validates a journalist’s work. It’s one thing to do an interview, but it’s quite another to show that interview real importance. You can always tell if the person really has their heart in it or not. For example, let’s say you’re a rockstar and you have two interviews scheduled for a given day. One interview is with MTV and the other interview is with a local free newspaper. Chances are, the rockstar will dress up, wear cool threads, and go out of their way to look like they don’t care, but really do, for MTV. They want the millions who see it, to be floored by the rockstar’s rebel without a cause spin to life. On the flipside, when it comes to the interview with the local paper, the rockstar might be late, give crappy answers, look bored and probably just not care – like really not care. When i interviewed Andy, he showed StrengthAddicts the same level of interest that he did MD, RX, or any of the big websites of that time. Whenever he was asked a question, you could tell the answer was from the heart. For most of us, that level of candor would require digging deep and probably choosing our words carefully, but Andy was an open book.

The last time I saw Andy was back in Pittsburgh for either the TCM Nats or the North Americans in 2019. In fact, he may have been at both. I know he was head of security at one and maybe was at the other to show support. He was always showing support and there was no denying that bodybuilding was his life. I still can’t believe how sharp his memory and attention to detail was. I hadn’t seen him in probably two years, but he recognized me immediately. The reason I hadn’t seen him in a while, was because Dymatize was sending him all over the world. That made perfect sense. He was hitting major destinations throughout Asia long before Kai Greene or any of the big bodybuilding star of today. He was building relationships wherever he went, teaching people about the fundamentals of lifting, eating clean, and building a desirable physique.

Andy’s approach was also truly unique. He had one foot in bodybuilding and one foot in powerlifting. Much like fellow fitness celeb Mike O’Hearn, Andy had a legitimate claim to training like a powerbuilder. Very few guys could match Haman’s strength – either for single rep maxes or for full sets. His range of motion was picture perfect – there was no slop, no momentum, no half reps and/or any of the little tricks that wannabes incorporate for views and clout. He could hit these numbers at a packed meet with three judges or he could do it in his garage – the guy was a monster, but every bit as humble as he was powerful.

Andy was never in the running to be the world’s strongest bodybuilder. He didn’t need all the accolades to do what he did. Guys like JOJ, Ben White, and even The White Rhino, all laid claims to being the strongest bodybuilders – and maybe they were – but Andy could definitely hold his own and did so without needing the actual bragging rights. I remember for one lift, he had his son shoot a video at their house, where he put shaving cream on his face, started shouting, and went to work on 495 on the incline. It was funny and impressive, it was real, and it was inspiring. There were no special effects, no camera crews, no bells & whistles, just a father and son having fun and letting the world get a sneak peak at one of the strongest men in the world at work!!

That being said, I”m not one of these people that glorify all things past and crap on what’s happening today, but I do want to illustrate that guys like Andy Haman are very, very special. They’re rare and their time with us is never long enough. God, I can’t forget those costumes he used to wear, and how much he got into his characters. You want to talk about a Hollywood performance, you had to see him at a huge expo. I remember more than one photo, where I’d throw an arm around him or rest my fist on his delt. Andy was a tall guy, but I’m taller than everyone – it just is what it is. Anyways, the costumes were made of a spongy material and they were intended to make anyone look absolutely jacked. I mean these are the get-ups that a portly person would wear to get a rise out of their friends, but Andy was like a slab of steel. A few times, he’d show off his physique, mostly because people wanted to see if the superhero was real or not. That’s another instance of Andy’s character. Most people in that situation would never indulge such requests, either because it required too much work or simply because they didn’t care. Andy loved what he did, he loved who he was, so there were no rules. If he could make people happy, he’d do it, without even the blink of an eye.

One point I really want to hammer is just how popular Andy Haman was. Like Rich Piana and Mike O’Hearn, Andy was in a perfect spot in time, just as social media blew up. He had a great relationship with Bodybuilding.com, he was one of the few top guys who didn’t get trolled ad nauseum on the boards, and he was backed by a supplement powerhouse. In those days, Dymatize was pushing him very hard, he was their guy, and in manys ways, he was the face of the company to a great many people. People liked him and they respected him. It was more than his physique, more than his impressive numbers, it was everything he was about. In many ways, his work as a role model was exactly what the industry needed.

Bodybuilding is a family sport. The more inclusive it is, the faster it will grow. This is a fact that’s foreign to many of the iron game’s biggest stars; however, it’s something Andy was all about. He was a real family man. He treated his wife with love and respect, and her, him. In an industry where people changed relationship statuses like I change my socks, The Haman’s were a very happy couple whose marriage showed us all, how great life could be. Andy was also an amazing father and taught his children the value of fitness, healthy eating, and working hard, probably from the day they were born. We saw all of these great kids grow up before our eyes. That’s how popular they were; for a few years, they were absolutely everywhere. And hand to God, there was no acting when it came to who they were. Who you saw, is who they were. Would you expect any less from Andy? Heck no!!

I have to say, I absolutely hate writing these articles. I hate having to put thoughts to paper when it deals with losing a friend. It truly breaks my heart to think how young Andy was when we lost him, but I know we’ll never forget him. That’s very important when it comes to writing articles like these. It’s important that those who didn’t get to meet Andy, read articles like these, and get to know him for who he really was, appreciating his many contributions to the sport we all know and love. Rest in peace, my friend.