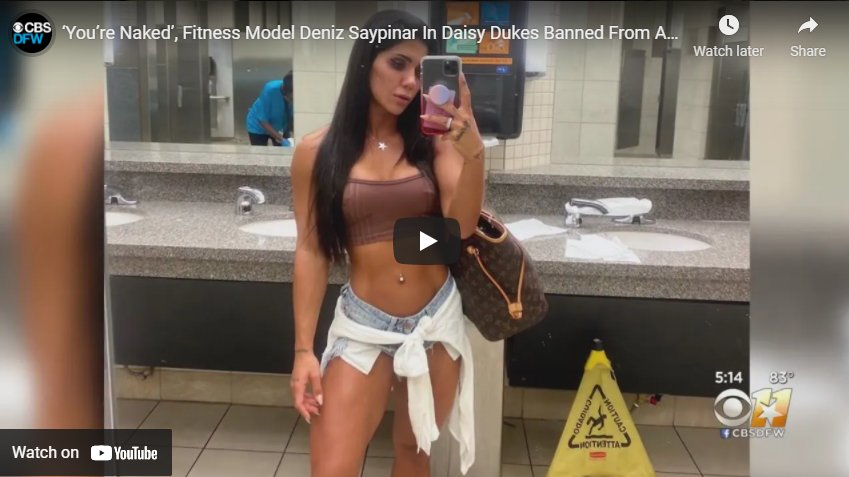 There are some things that just make you shake your head these days. If you pay attention to what’s going on in the world, you would know that issues with airlines have been increasing steadily. It seems like every week we are hearing about something happening on a plane or airport in regard to people being thrown off of planes, people and kids being yelled at for masks/no masks, and this latest one just further shows that those who have an incredible physique are under fire by those who are overweight and obese with what happened to Deniz Saypinar.

For those of you who may not recognize the name, Deniz Saypinar is a Turkish 26-year-old IFBB Pro Bikini competitor as well as a fitness model who lives here in the US. To say she’s easy on the eyes is an understatement. But then again, her physique fits the mold of most bikini competitors and fitness models – which apparently American Airlines is not used to seeing?

Deniz Saypinar was trying to catch a flight via American Airlines from Texas (Dallas/Fort Worth) to Miami when she was not allowed to board the plane due to her attire. She was wearing a brown tank top exposing her defined abs as well as short denim shorts. Around her waist, tied, was a long-sleeve, white shirt that covered her butt. As a bikini competitor, it is safe to say that she has a body that would turn heads – amazing legs, great glutes, etched abs, and a toned upper body. Men, women, heck, even kids would probably turn to look at her if she walked by. But this is nothing out of the norm (or is it due to our obesity epidemic and acceptance?).

When Deniz Saypinar was getting ready to board her flight, she was stopped by American Airlines personnel and told her denim shorts were “too short” and that it would “disturb families” who were on the plane. They stated that she was “almost naked.”

Now, I’m not sure whose lap she would be sitting on that would cause them to be offended by the view, but according to my understanding, you’re sandwiched into a plane with people on all sides of you, and you sit on a seat that does not allow anyone to view your butt. Am I right?

So, if this were such a disturbance, her actually walking around would be a bigger distraction than sitting in a seat, with a row of seats in front of her and a row of seats that her back is against. There’s maybe a handful of people on the plane who could actually see her shorts due to restricted views. This story is absurd.

Here’s my opinion of what happened. You have a female who takes care of her body (Deniz Saypinar). You then have American Airlines personnel (older women or bitter men) who don’t look like her and are jealous. They are probably a bunch of snowflakes like much of the country today, and because they are too sensitive and can’t cope with the fact that someone is showing off their hard work in the gym (which they have probably never seen the inside of), they banned her from the flight.

The fact that American Airlines disapproves of the way she dresses exposes everything that is wrong in this country today. Why is everyone so easily offended by the things people wear, don’t wear, how much they weigh or don’t weigh? She’s a frickin’ athlete who looks phenomenal, and you’re telling her to put some clothes on when she’s wearing the same thing (if not more) that many people who are 3x her weight getting on American Airlines flights.

Had this been an overweight individual being told she needs to put more clothes on, there would be a discrimination lawsuit filed because the individual would claim she was approached and told to add clothing because of her weight. And you know I’m right. So, how is this not discrimination, only with the shoe on the other foot?

Deniz Saypinar went to her Instagram to tell her one million followers via a story of what took place. As you can imagine, American Airlines probably has a million people who may think twice about flying with them.

When looking at the American Airlines’ rule, it states: “Dress appropriately; bare feet or offensive clothing aren’t allowed.” So, she wasn’t barefoot, and there was nothing offensive about her clothing. It’s not like she had “GO F*CK YOURSELF” across the chest of her tank top or something that people may find “offensive.”

Listen, I’ve been on plenty of flights over my career. During that time, I’ve seen some horrific images before my very eyes that I find appalling. Did I say anything? Nope. Did I mind my f*ckin’ business? Yup.

How many times have you seen women wearing yoga pants or spandex at the airport? PLENTY OF TIMES. I mean, with that kind of apparel, there isn’t much left to the imagination if you know what I’m saying. But passengers wearing such walk right on the plane without incident. So, why all of a sudden, if someone like Deniz Saypinar is boarding in denim shorts, it becomes a problem and “distraction?”

Out of all the stories I saw about this, not one person said American Airlines owes Deniz Saypinar an apology. Well, let me be the first to have her back!

American Airlines, you 100% owe Deniz Saypinar an apology for over-reacting to her attire. Denim shorts and a tank top is an issue? Do you see some of the people who walk onto your planes who look and smell like they haven’t bathed in months? THOSE people are a disturbance to everyone around them when they cause the plane to smell like a trash yard the entire flight. But you’ll never say anything to them because you’ll get slapped with a lawsuit. So, why open your mouth now to a woman who wasn’t bothering anyone? Get your shit together. It’s 2021.