Does Shanique Grant Have a Point? Is It Impossible to Make a Living Competing? 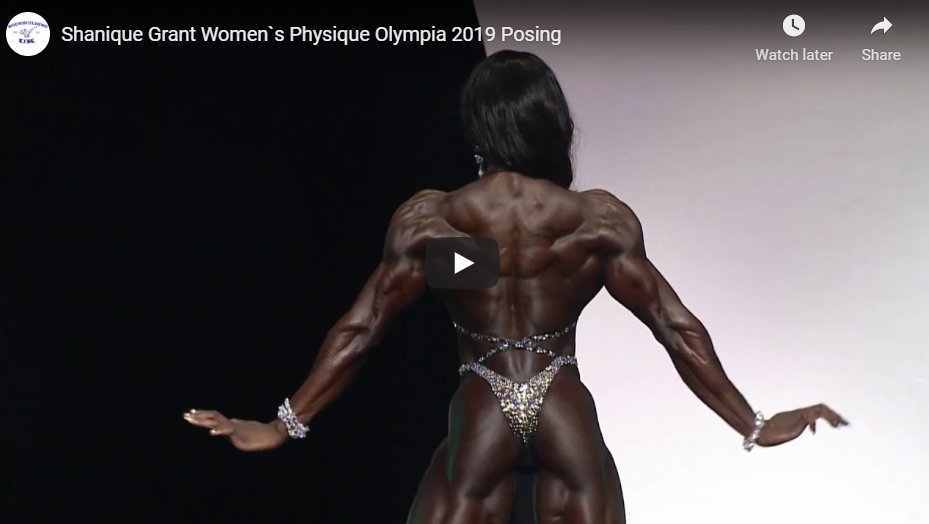 One of the greatest Women’s Physique competitors to ever step on stage, Shanique Grant, followed up her 2020 Olympia with a sudden retirement announcement. Some thought she was just salty for placing second after already winning two Olympia titles. Her explanation was that she wants to focus on her longevity (health), start a family in 2021, all while still keeping her femininity – these were taken directly from her Instagram post on January 2, 2021. Much respect to her for making such a tough decision when she still had many good years ahead of her in the sport.

Then came an interesting Instagram post towards the end of February 2021 that the message (quite frankly) shouldn’t shock many people as it’s something I’ve been watching closely for years. Shanique Grant posted, and I quote (the post has been since deleted, but you can still find screenshots online), “Women’s Physique makes TEN PERCENT of what the open bodybuilders make at the OLYMPIA. I’m not missing anything. Pay fair for once. I’m speaking my mind for once in almost a decade. *peace hand signal* #REALITYofBODYBUILDING”

Does she have a point?

First off, respect to Shanique Grant for speaking her mind. Granted, I doubt she would have posted such a message if she still planned on competing, but props to her for speaking out on a topic she thinks is unfair in the sport. For those who don’t know what Shanique Grant is even talking about, her 2nd place finish at the 2020 Olympia awarded her a $15,000 paycheck. Some of you may be thinking that ain’t bad. But if that’s the only show you do all year, and this is your “job” or “career,” $15,000 is nothing.

The winner of the Women’s Physique division got $40,000. Again, that’s not a lot of money. Now, let me explain what set Shanique Grant off. There’s no denying that all competitors work hard at their craft and want to bring the best physique to the stage. But it does make you wonder why anyone would put themselves through all of that work and dedication to training and nutrition for $40,000 per year if all you do is the Olympia (and that’s assuming you hopefully go there and win)?

When you look at the Men’s Open division, the winner of the 2020 Mr. Olympia (Big Ramy) got $400,000 for his win. Let me put this into perspective a little more, William Bonac, who placed 5th, was awarded $40,000. So, the 5th place winner in Men’s Open and the WINNER of Women’s Physique both got paid the same amount. That’s crazy, no?

Should There Be Changes Made to Prize Money?

Oh boy, I’m probably going to put my foot in my mouth, but I’m going to look at this through a different lens while also looking at the big picture.

The IFBB and Olympia promoters have every right to pay whatever they deem fair to winners. It’s their show, organization, and money they’re handing over. That said, Men’s Open is the “freak show” of the circus and puts the most butts in the seats. Does that mean people don’t care about the other divisions? Heck no. In fact, I think Classic Physique is one of the hottest draws these days.

Whether you or I believe the pay is not fair, that’s tough to argue when looking at both sides. The IFBB/Olympia shouldn’t have to award prize money for divisions that aren’t putting the most butts in the seats. Something else to consider is, it’s a personal choice if competitors decide to sit out the entire year and only compete at the Olympia (assuming they’re already qualified). If money is the issue, simply step on stage more often throughout the year. No one is telling them not to compete in other shows or that they can’t. So, complaining about a potential $40,000 payday seems a little crazy.

Should there be changes made to prize money distribution throughout ALL of the divisions? Ugh. That’s honestly a tough question to answer. While I’d like to side with the competitors and inquire why there is such a large discrepancy, it’s hard to argue the fact that those making the most money are the ones who are really selling the most tickets and have the biggest draw. And please don’t take that as a smack in the face to non-Men’s Open competitors. It’s just the facts.

Here’s something that I believe not many people are considering these days. Competitors don’t have the same value they did 10, 20, 30 years ago. Supplement brands would scoop up as many athletes as they could pay and leverage the heck out of them for marketing purposes. Today, brands really aren’t signing athletes as no one truly cares who is with what company. People have their favorite competitors, and they have their favorite brands. Both are allowed to be completely exclusive these days and not married in order to sell products.

So, do bodybuilders have the same ability to make money like they did decades ago? Sure! The new play is now social media. If they are a big-name competitor, they should be able to sell tons of things through social media. Signed photos, training, nutrition, push a website with exclusive content behind a paywall, the list goes on and on. They can even promo meet and greets and get paid by a gym or supplement store for showing up. They have the means to make money, it just puts all of the weight on them to be proactive and actually go out and hustle for the money.

All in all, can competitors make a living from competing? Absolutely. But those who want to whine and complain about not getting paid enough need to get off of their soapbox and get to work off of the stage. No one owes you anything. You decided to compete and knew how much you’d be paid if you win (or don’t win). If you don’t like the amount on the checks, go work a 9-5 job. Bodybuilding is nothing like other sports. You don’t have a contract that pays you whether you perform or not. Quite frankly, it’s a gamble. If you miss your mark, you could go from winning $40,000 down to going home with nothing by falling back a few places. Nothing is guaranteed.

Do I agree with Shanique Grant? Yes, but I also see things from both sides of the debate. Will things change. No, probably not. This means competitors can either continue doing what they love and accept the money or leave the sport and go do something else.