Dana Linn Bailey – The Comeback or The Cop Out? 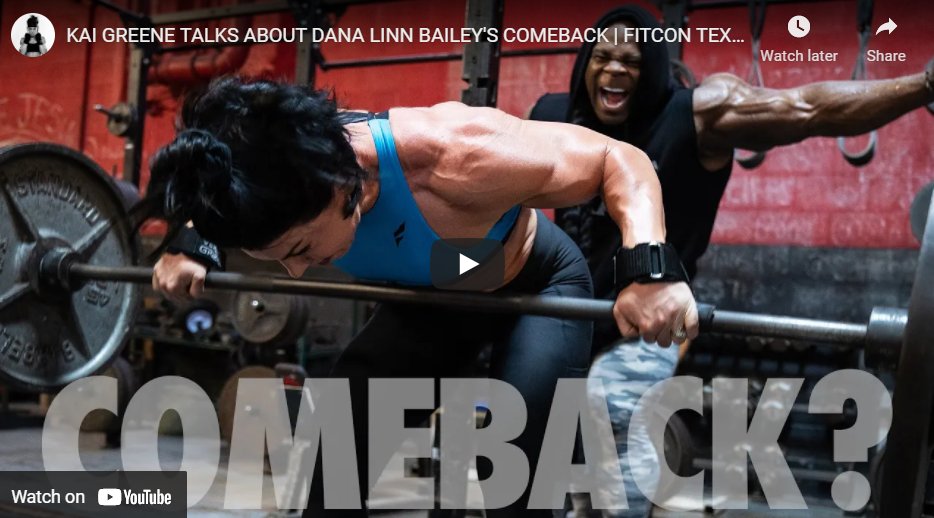 In Spanish, we have a saying, “dime con quién andas y te diré quién eres.” It translates to tell me who you hang with and I’ll tell you who you are. Hold that thought. Now, I like DLB. I loved her physique when she won the first ever Women’s Physique Olympia and I also liked her physique after the stage. When she won, the category was brand new, and it could have gone in many different directions.

It could have stayed consistent with Dana’s look, it could have rewarded the denser/freakier Juliana Malacarne (who’d go on to dominate), or could have totally thrown everyone a curveball. The truth is, the division has even outdone Juliana. What I find to be very interesting are the comparisons fans of muscle ofen make. For example, if you took a champion from The Golden Era (e.g. Robby Robinson, Frank Zane, Boyer Coe) and you compared that look to that of Coleman, Cutler, or Ramy, how would they do? Well, how would they? Take Zane at 198lbs and stand him next to Ramy at 300+. That wouldn’t be a contest; it’d be a massacre. You could argue on behalf of beautiful shape, flow, and symmetry, but in the end, when it’s all said and done, Zane would look like an emaciated twig next to the bigger, fuller modern day champion.

I don’t want to say that Dana’s winning look in 2013 or her runner-up look in 2014 would be laughed off the stage in 2021, but it certainly wouldn’t win her another title. When she won the first one, she made history, and she was on top of the world, but the title didn’t make the champion. If anything, I believe DLB may have gotten the nod, only for what she could do for the division. Remember, she was already being mobbed, people were copying her style, and media outlets tripped over themselves to talk to her. That being said, what would a comeback mean for her today?

Just recently I penned an article on the possible comeback of Ron Love and I’ve written articles on other comebacks, but none of those really apply here. Many times, a comeback is best suited for a competitor that’s been out of the loop. The best ones deal with people that have gone all but dormant. When you have an individual whose whereabouts are unknown, who people don’t even know is alive, and then they come out of the woodwork, that’s the kind of comeback people lose their minds over. DLB, on the other hand, has been active with her brands, she’s been in the public eye, and she left the division because she was no longer winning. I hate to put it that way and maybe I’m way off, but if she’d won in 2014, 2015, and beyond, I don’t think she would have ever stopped competing. The truth is, I don’t think she needed to compete and I think the whole process may have jaded her to a certain extent. Like I said, she didn’t need the title and if anything, when she won it, she was probably expecting a dramatic change and I don’t think that change ever happened.

Bodybuilding titles don’t have that power. Perhaps, a case can be made for Men’s Open and 212 Bodybuilding, but even then, it really depends on the athlete. Physique-based sports remain cult sports. Outside of bodybuilding shows and fitness expos, a Mr. O or a Ms. O could walk through an entire mall and not be recognized by a single person. Additionally, even if they were recognized, no one is going to hyperventilate and mob them for autographs. At least not in the West. Then again, that exact scenario played out with DLB, at expos. I remember fans went absolutely nuts for her in Columbus one year and that level of support hasn’t really waned since she stopped competing. I guess the big question for me, would be, why comeback? Why would she subject herself to a prep, wreck her nerves, and then be scrutinized by judges, when she doesn’t need any of it. Even if she won, so what?

So what’s up with the Spanish quote? Well, one of DLB’s closest friends in the industry is none other than Mr. Getting It Done, Kai Greene. Kai just left his supplement company and signed to Redcon1. As a result, conspiracy theorists on the boards and in gym locker rooms – everywhere, it seems – are convinced that Aaron Singerman must have put a clause in that mysterious contract that forces Kai to compete. If you buy into that, you probably buy into a lot of things – like the Publisher’s Clearinghouse sweepstakes and Miss Cleo commercials. I, personally, see right through it. To me, it’s just another way to screw with the fans, get them to fall for the ruse that The Predator will be back on stage.

In the end, Kai won’t compete this year, next year, or ever. The guy is a movie star, an author, a media personality. What the hell does he need to compete for? What the hell does Dana need it for, either? Maybe hyping up a comeback is an easy way to stay relevant, to get hits, and yes, maybe, it helps sell goods and services. That’s a big maybe, however, but if it works, then more power to the athletes who do it. To me, all it is, is entertainment. It’s them stringing the fans along, getting them all riled up, and even if, in the end, they crush their spirits, they would have at least kept them busy for a few months. It’s a beautiful thing to believe, even if the fairytale never comes true. And that, my friends, is still entertainment. Maybe Kai’s antics rubbed off on DLB – or – maybe Dana really is thinking about making a comeback.

It is curious that the former Ms. WPD O has started posting a lot more on Youtube. It is curious that she looks so fit, but… if you’re a real fan of hers, you know she’s never let herself go. She is harder now, but Kai has also gotten himself in near-stage shape, only to not compete. I hate to compare people, but once again, “dime con quien andas…”

The one video that has everyone talking, “The Comeback Kid,” may also have a lot of truths in it. The fact is, the title suggests one thing, but the levity within the release may be the champ’s way of cluing in her fans. Who cracks jokes and has laughs when posting a call to arms? Then again, if you’re a real fan of DLB’s, you know that she never took herself too seriously. The fact she was laid back and the fact she loved what she did, were key components to her success. Rob’s as well. The single biggest reason people loved them and continue to support them, is because they identify with them. It’s when people feel like they’re out of touch with celebrities, that they slowly but surely find new ones to follow. Dana always made people believe that they could achieve what she did, not through having a ton of money or amazing genetics, rather, by working hard and believing in yourself. It’s the fans who would truly win with a comeback. They would love it and it would motivate them to do great things. The question is, is that enough to get a former Olympia champion to come back?

I hate to be the skeptic, but I have to go on record as saying, I think this is pure smoke. As much as I love Dana, I don’t think she’s coming back, any more than Kai Greene is, but God Bless you, if you choose to think with your heart. I’ll never fault you for that; I just know better.

As always though, it’s your opinion that matters most. Do you think DLB will make a comeback? And if so, why?