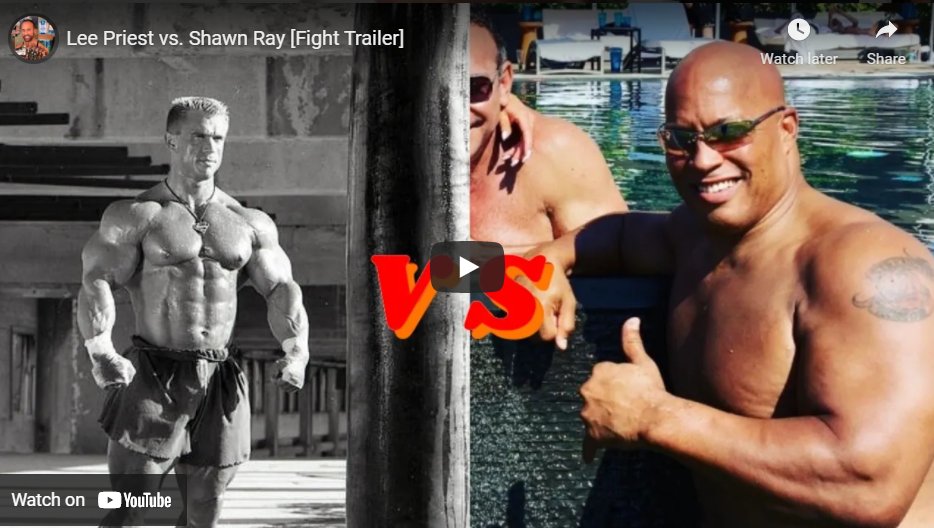 Some things just never change. We often hope that we grow beyond petty rivalries and at some point, old feuds get put to bed; however, sometimes, bad blood is such that no amount of time will fix the mistakes of the past. The sport of bodybuilding is no different. There’s guys who haven’t spoken to each other for decades and it’s unlikely they ever will. I will say that when it comes to physique-based sports, the source of most spats, can be boiled down to success. As with any other scene, you have those who earned titles and accolades and others who simply didn’t. The have-nots are many and the vast majority blame others for their shortcomings. It’s the coach’s fault, the sponsors didn’t back them enough, or the real common culprit – it’s politics.

For every person who failed, there’s a million stories for why they came close, but just didn’t make it. That being said, for the feuds we actually know about and talk about, those aren’t generally between winners and losers, necessarily. You have to figure that both people in the rivalry would have achieved some level of success, otherwise, the feud itself wouldn’t be newsworthy, years later. With regards to the feud in question, it focuses on two well-known bodybuilders, both of which achieved different levels of success, both on and off the stage. While they both shared a few stages together, they hit their peaks at different points. Now, it’s pretty much a matter of record where I stand when it comes to this particular rivalry, but I want to dig deeper. Maybe I’m being too hard on one guy – or – maybe, I just know what I’m talking about. I’m also not totally sold on celebrity boxing matches, especially, not when it comes to solving a feud.

Let’s start out with Lee Priest. I was always a fan of his physique. I still remember opening up a magazine and being dumbfounded by him beating Chris Cormier. Back in those days, the internet was a shell of what it is today and the magazines showed the bodybuilders at all angles. The pictures were true works of art and that coupled with some imagination on the reader’s part, could help recreate what the judges must have seen. Although the coverage then paled in comparison to today, it was kind of cool because you could almost imagine the utter insanity of this giant slayer at work. Back in those days, Lee was it; he was living out the part played by Shawn, Lee Labrada, Rich Gaspari and Danny Padilla. There were shots he hit, that were entirely all his own. And while Priest trained hard and ate big, he was also something of a genetic phenom.

I still remember watching a ProLab training video, where Lee put a group of guys through a workout. One of the guys wanted to know what the Australian great did to build his world class forearms. The answer totally dumbfounded him – I mean he was absolutely stunned. In no uncertain terms, Lee told him he didn’t even train them. His forearms got some love when he trained arms, but he didn’t specifically work on them. Imagine that!! Having one of the best body parts in the business and not really having to do much to get them. That’s huge!! What was also huge was Lee’s honesty. He could have totally told a little white lie, like so many others did back in the day, particularly on a video for his sponsor, but he was 100% candid. That was big leagues of him. There were other things I liked about Priest’s approach.

Lee seemed like a nice guy. He loved KFC, would balloon up, and loved to hit the iron. His DVD’s were pretty dope and he always gave good interviews. In many ways, he was also somewhat of a darling of the industry press. They couldn’t get enough of him, but contrary to what many of you may think, his physique was his calling card, not his mouth. I’ll never understand why guys who have so much to offer, ruin everything because they want to be “uncensored” and they want to be rebels – even without a cause. To this day, I still don’t know who or what Priest was rebelling against. He didn’t care about improving conditions for a lot of his fellow competitors because if he had, he would have stood with them.

When Bob and Shawn were trying to get a union going and speaking out about prize money, benefits, and trying to sell the notion of collective bargaining, the loudmouth from down under, was nowhere to be seen. And it’s not like he had to be, but he was so adamant about promoting this persona that simply wasn’t who he was. He was a guy who landed big contracts, got plenty of buzz, and who the judges were very fair with. Do you honestly think that if politics truly played the kind of role so many critics claim, that Lee Priest would have made into the Olympia Top 6? C’mon…That’s like a punk rocker singing about his impoverished life while earning gold and platinum plaques hand-delivered by the record company on stage. It’s just a bit much, don’t you think? Since when did Lee have it so bad? Still, he went on a collision course with the IFBB.

We all make bad decisions in life, but some decisions weigh heavier than others. For all his rhetoric and divisiveness, if Priest had stayed the course, improving the very few weak points he had, and picking his contests strategically, he could have potentially won the Ironman, maybe the NOC, and/or maybe even snagged a Top 3 spot at the Arnold Classic. Had he achieved any of the former, his career would have gone to places he could only have dreamt of. And the truth is, it may very well have gone that way. Instead, one of his biggest blunders was jumping ship to the PDI. His next blunder was not trying to come back. And when Bob Cicherillo, a guy Priest trashed every chance he could, tried to get his pro status reinstated, Priest pissed that away too.

From then on, his only other contests would be NABBA ones, he’d burn through sponsors, and one of his favorite go-to fallbacks, was hinting at a possible comeback. Well, guess what, it’s been fifteen years and we still haven’t seen him step foot on an IFBB stage. There’s no doubt in mind if he simply made a phone call and expressed any kind of real interest, that he’d be able to jump through some hoops, and get his card back. I mean, 15+ years later, who really cares? Nonetheless, the fleeting hope of a comeback and/or the occasional fantasy match-ups on the boards, are the only links the aging Aussie has with current pro’s and the scene he once dominated.

I don’t know much about his finances, his future plans, or whether he ever plans to compete again, but I do suspect he’s unable to really process how he went wrong. There’s no way he can be ok with having ruined a career and not gone as far as he could have. Whether he’s making videos in the back of a warehouse, playing around on a forklift, or doing Zoom feeds at RxMuscle, I’m sure there isn’t where he thought his promising bodybuilding career would take him. It’s no wonder he despises guys like Shawn Ray. That as much is real, it has to be. It’s sour grapes at its worst and there’s no question in my mind that Dave [Palumbo] sees it and wants to exploit it. I mean, if one thing’s a certainty, it’s that drama brings hits and the more hits you get, the more you can charge your advertisers for space. It ain’t rocket science, folks.

“Sugar” Shawn Ray, on the other hand, is on top of the world. Love him or hate him, you can’t deny reality. Shawn is an Arnold Classic champion, Mr. Olympia runner-up, and an inducted member of the IFBB Hall of Fame. He runs Digital Muscle (the hub created by Dan Solomon sold to Jake Wood), he’s an Olympia emcee, and he’s a successful contest promoter. Before that, he was a driving force at Generation Iron, and before that, he was a major player at Muscular Development. Before that, there were major wins, like being the most photographed bodybuilder in the history of FLEX Magazine.

Here’s a guy who rose to the top with Weider, then with MD, and then with outlets that were totally created out of thin air, like GI. On what level does Shawn Ray even think about Lee Priest? I mean, seriously, what would be the rationale? Even Palumbo, who historically likes to slam Ray, has waited patiently in line to have him on RXMuscle.

Shawn Ray is a star – love him or hate him – you’d be delusional to say otherwise. Moreover, the guy gets mobbed wherever he ever goes. When’s the last time Lee got mobbed? Last I saw him was at the Columbus airport. He walked up and down, waiting for his flight, and no one spoke to him. He looked like a sad little man pulling his bag on wheels. It broke my heart. And to be honest, the turnout wasn’t much better at the Black Skull booth, either. There really weren’t that many people going to see him. I just hope the company got some kind of ROI for the airline ticket, hotel, and meals, but then again who knows, who cares? I know I don’t and I bet you money, neither does Shawn.

In fact, when I first got wind of this larger-than-life celebrity boxing match, I asked Shawn about it. He didn’t have the faintest clue what I was talking about. He had to take time out of his busy day to look for it. It’s pretty sad, but maybe in Lee’s mind it’s still 2006. I really don’t know, but I can tell you that a celebrity boxing match won’t solve anything. It’s not going to put a 20yr feud to bed, it’s not going to generate much buzz, and the only entity I could see benefitting, would be RXM. Shocker, huh? Well, it is what it is. Nonetheless, if you were to go by the marketing push, alone, you’d think Lee vs Shawn was generating Axl Rose vs Vince Neil buzz. Don’t believe everything you read – especially – not in this industry!!

What are your thoughts? Do you think Shawn cares about fighting Lee? And who do you think would have won in this epic battle?

Newer Post
Discounts for Supplement Reviews: Wouldn’t Everyone Benefit?
Older Post
Why Do You Work Out? Everyone Has A Backstory Worth Sharing