by Christian Duque John Meadows was one of the most passionate, knowledgeable, and positive people I’ve ever met in the fitness industry. To wr 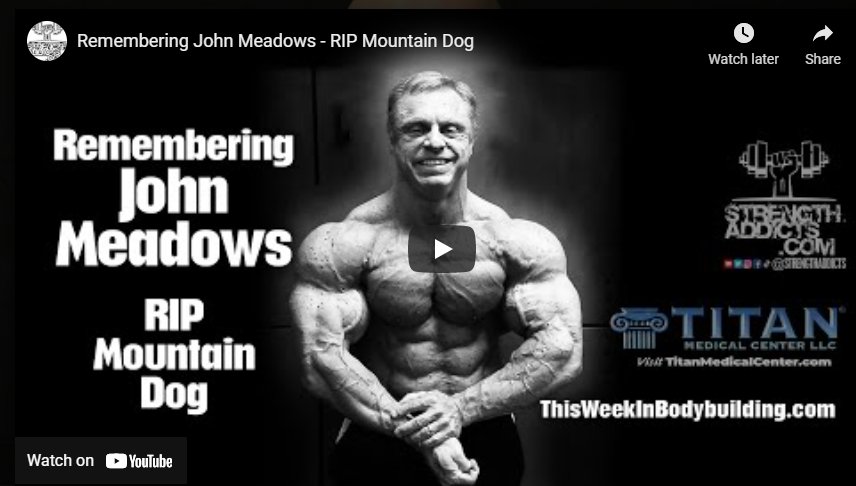 John Meadows was one of the most passionate, knowledgeable, and positive people I’ve ever met in the fitness industry. To write about him in past tense, is very bizarre, to the say the least. While I can’t say we were friends, we were most definitely acquaintances. He knew who I was and I most definitely knew who he was. I’d been a fan for years and I always found his content to be very factual and innovative.

This wasn’t a guy obsessed with saying controversial things or getting a rise out of others. His fame was the product of his vast experience and his eye for muscle. His support base was comprised of fans and fellow competitors, alike. While some liked his physique, most wanted to pick his brain. He was a man who understood the fundamentals of training, the wonders (and limitations) of the human body, and just how far you could push towards a given goal.

Whereas some guys go pro with relative ease, that wasn’t the case for the Mountain Dog. His own health presented a substantial roadblock, he was older, and unlike many of his contemporaries, he had many responsibilities that he couldn’t renege on. Nonetheless, Meadows was old school in his way of thinking. He was privy to the fact that good things come to those who wait. Maybe he didn’t always place where he wanted, but he would always get better. Whenever he’d fail, he’d use that experience as a learning opportunity.

These trials and tribulations helped him create a perspective that many in the bodybuilding world subscribed to. This is why John was always sought after, by media, companies, and events, alike. He was an all around positive-minded, humble, and outgoing gentleman. When he launched his own line, Granite Supplements, he pressed forward, supporting the sport, the competitors, and putting out products that were a cut above from what everyone else was doing. These are just some, of the many, attributes that will make this great champion, this legend, live on. Legends never die!!

At a time when everyone’s a coach and everyone, seemingly, has their own training style, John Meadows offered something totally unique. Whereas many competitors tend to coach-hop, those who worked with the Mountain Dog, for the most past, stayed put.

He didn’t need to advertise and beg for business. He did what he did and the results spoke for themselves. Anyone who ever worked with John, will tell you that he didn’t beat around the bush. A great coach, on this level, gives it to you straight. It may not be what you want to hear, but it’s what you have to hear. Coaches like John, won’t tell a person who needs two years to get to the national stage, that they can turn pro in six months. Like I said, John wasn’t about smoke and empty promises. You got it all, with Meadows. Your training, your supplements, everything was covered.

I met John years ago and we did a killer interview at the 2015 NPC Mike Francois Classic in Columbus, OH. Initially, I was very nervous. You have to realize that I looked up to this guy, I read his articles and I watched his videos. I’d be a liar if I said I did that for all the guys whose physiques I admired. A lot of champions are either or. I either like their look or I like what they say, but seldom do I like both.

John didn’t have the prettiest physique, but it was the product of an indomitable spirit. I compare it to that of Jay Cutler or Branch Warren. Although he didn’t have the genetics to simply look at weights and grow, he made do with what he had. He took his condition to another level. He posed with tremendous heart. Not only did he love being on stage, but he lived for the camaraderie with his fellow competitors. He loved the competition and the battle. This is why so many fans were always at that edge of their seats whenever he’d compete. At the same time, I think you’d be hard-pressed to find a competitor who didn’t like him. That’s because you can be a fighter (competitively) without fighting with people, personally. When you think of the quintessential bodybuilder, The Mountain Dog’s image should come to mind.

When we did our interview, I was terrified that I’d ask a dumb question. I’d already done a good number of written interviews, articles, and even worked for RxMuscle, but I was legitimately concerned that I’d ask something that wouldn’t even get a response. I was petrified I’d say or do something that would get a sigh or a nod or that he’d laugh at me. I must have a good poker face because years later I’d ask him about that interview and he always said it was a good one. The questions were well thought out and I did my best not to interrupt him. 20,000 views later, I still get positive feedback on Facebook and the message boards. It’s by no means my best work and I can’t even tell you the last time I was that scared to interview someone, but it was a great moment in my progression as a journalist. I’m really happy that fate allowed our paths to cross and that I manned up and asked him for ten minutes of his time. A lot of people asked for John’s time and he obliged.

When you stop to think about how many press outlets John Meadows gave interviews to, it’s pretty mind boggling. But in addition to what he did around the industry, his own social media content offered fans a wealth of knowledge – for free, no less!!

If John was all about money, he could have made so much more of it. He could have charged for every word he spoke – and – people would have paid. That wasn’t who he was, though. He loved bodybuilding, he loved helping people, and he had a very noble heart. Unlike many in our scene, who are obsessed with the world of material wealth, bragging about how rich they are, and constantly trying to impress others, John Meadows, opted to be humble, a real family man, and a good ambassador for bodybuilding. We will really, truly, miss him.

We lost a great man, at a very young age, and it’s time we come together to help his family. This is why we, here at Iron Magazine, wanted to put this article out, as well. We wanted to let people know about this legend’s passing, the fund, and to let the world know that someone very important to us, has been lost. We don’t know the cause of his death, and quite frankly, that’s the farthest thing from our minds. I’m sure, in time, the vultures on social media will try to cash in on that, but they’re soulless people, anyways. Shame on them.

We wanted to send our deepest condolences to the Meadows family and to Mountain Dog fans, the world over.