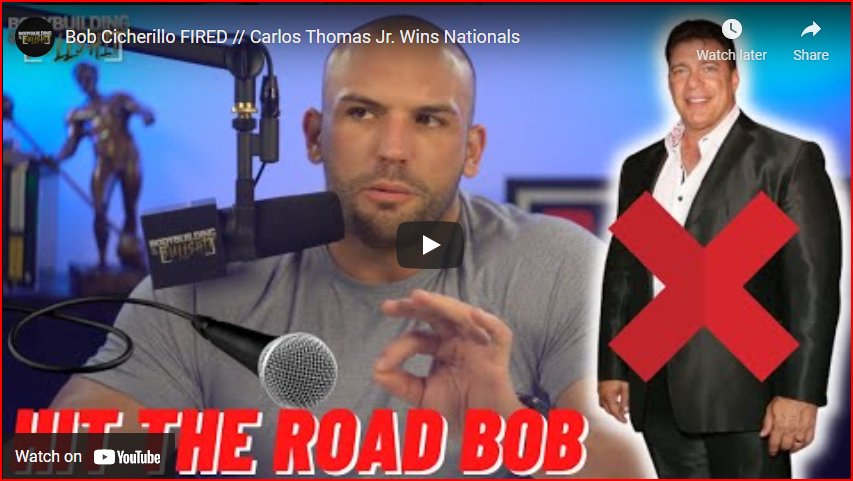 When news hit that legendary bodybuilder turned contest MC Robert “Bob” Cicherillo had been dismissed from his duties at one of the biggest contests in the NPC, it sent shockwaves throughout the fitness industry. This was the case for a couple major reasons.

For starters, the [relatively new] promoter of the Nationals is considered by many to be one of the closest allies to the most important leader in amateur and professional bodybuilding in the world. If anyone thinks all promoters are created equal, they’re sadly mistaken. To get fired by the promoter Cicherillo got canned by, can easily be a career killer; however, Bob is also in a unique situation because of his strong ties throughout the country and around the world.

Cicherillo has prided himself on being loyal for decades. He’s taken a lot of abuse for standing strong with the federation, be it from rebels like Lee Priest, media voices like Dave Palumbo, and/or past officials who have lashed out against him because of the fact he’s so loyal. In many real ways, bodybuilding is a chess game; it’s also very much a thinking man’s game. The former Mr. USA has always kept things on his plate. He’s very smart in that regard.

Whereas many retiring bodybuilders, including Mr. Olympias, have gone onto personal training and dodgy training schemes to pay the bills, Bob was keen to know where the internet was going, long before there was social media. In a very real way, when he and Dan [Solomon] embarked on Pro Bodybuilding Weekly, they cemented their position in the industry.

Now, understandably, there are major differences between being in the sport and being on the business side of things. Interestingly Bob has been able to develop a strong presence in both. When he knew retirement was imminent, he worked with Bodybuilding.com, Dan, and a number of different companies. Sometimes “his work” would consist of doing a string of shoutout videos and wearing a company shirt for a few months, but guess what, that paid the bills. With one such company, he even had the title of Vice President, but who knows what he actually did?

I like Bob, but is he a bit of a bullshitter? Maybe more than a bit. The fitness industry isn’t too far off from the world of used car sales. That’s not necessarily a knock on those who “hustle,” because someone has got to get the gigs and someone’s got to get paid.

At the end of the day, what is a contest MC at a bodybuilding show? Besides a few jokes and a bit of a schtick (if they’re skilled enough to create one), all they’re really doing is reading names off a sheet. It’s not rocket science. Keep a beverage nearby to keep from losing your voice, familiarize yourself with the tough sounding names, and make some eye contact (from time to time) with the judges, maybe plug the vendors, and occasionally try to rally the crowd. Again, it’s a key job, but it pales in comparison to expediting and judging.

Expediting requires complete control of the stage, locating competitors, and making sure there’s a steady flow on and off the stage of competitors. Great expediters keep to their schedules. Guys like Tony Roberts and Rick Bayardi have become so good at keeping shows on schedule, that they’ve become some of the most sought after in the world. This is why they work the Arnold Classic and the Olympia Weekend.

Judging is also extremely skill-oriented. Imagine seeing hundreds of bodies and being able to pick out the best from group after group. From there, the best of the best square off, and winners are selected. This type of work requires a strong reliance on years and years of test judging and judging at the various levels from local to regional to national and pro. To compare MC work to what expediters and judges do, would be a hell of a stretch. It would be pretty foolish, actually.

Still, Bob was able to create a niche. From his corny jokes to annoying the competitors with build-ups that essentially don’t lead to results. His suits are the talk of the town and his self-confidence is something of record. I often think Bob’s self confidence can arrive as much as half an hour before he does to a venue. Seriously, though, he’s full of himself and that’s part of what’s kept him on top for as long as he has been. If he were a humble, soft-spoken man, he wouldn’t have been in such demand that years ago he bragged about MCing small contests for a minimum of $5,000 a piece. Imagine making that kind of money, without breaking a sweat, and being able to call yourself the “voice of bodybuilding.” It may not be an accurate assessment of his true role in the sport, but it’s all about how you present yourself.

To the world, the former Mr. USA and Masters Mr. World, is seen with the most powerful people in the sport, he breaks bread with them, and he’s been the athlete’s rep for as long as the post has existed. What does he actually do? Who the hell knows. That’s not the point. The point is, he sells it and he’s able to stack his self-confidence with the high demand for his MC work.

The finishing touch is his work with the Mr. Olympia. The Olympia is, after all, the Super Bowl of Bodybuilding. Anyone who works for it, has hit the big leagues; however, his role makes him more visible to the fans than even Dan Solomon (who’s actually the promoter) or Jake Wood (who owns the darn thing!). The fact is, everyone knows Chick and he uses that popularity to open doors and silence critics. That said, this past weekend, when he was fired as MC of the NPC Nationals, many believe this will bring one of the most prolific bodybuilding influencers off his high horse. I’m here to tell you, it won’t.

While my friend Nick Trigili did a great job breaking the story and other outlets like RXMuscle did a respectable job weighing in with in-depth commentary, at the end of the day, it’s all just hot air. Bob could care less. If anyone thinks Bob is cringing at the news he was fired – or – punching the walls of a room somewhere, wishing everyone would just stop talking about him, then you clearly don’t get Bob and you don’t get the industry. It doesn’t matter if people love you or hate you, if they’re talking about you, that’s a great thing. And for all the up and coming MC’s that think Bob’s termination from Nationals will somehow create a vacancy for his gig at the Olympia, dream on. He was fired at Nationals. That may or may not affect his role with that contest next year. It also may or may not affect his work in that zone. Will his termination from the Nationals stop other promoters from wanting to hire him for their shows? I doubt it. If, anything, the controversy could just as well make him be in greater demand.

If you want to fire someone like Bob and you want to really hit him hard, it should be done privately. When it’s done publicly, it feeds into his popularity. Now people want to know more!! Being the marketing genius that he is, he will use any press, as a way to promote himself.

Whatever feelings you may have about Cicherillo, the guy is entertaining, and promoters who want to put on the best contests possible, want to ensure their shows are fun. Even Nationals. Bob may have been fired, but he couldn’t have been fired, if he wasn’t hired, initially. That’s quite possibly the biggest show in the amateur division and they could hire whoever they wanted. They hired Bob. Just because the man got fired, for whatever reason, doesn’t suddenly take his talent away, it doesn’t throw water on the demand for him, and it certainly doesn’t take away from the years, decades of loyalty he’s had for the federation. Then again, I’m just a writer and this article is just a collection of my thoughts. I can say that I don’t think Bob’s firing will have any impact on the Olympia Weekend.

I have never met Jake Wood, but I’ve seen how he carries himself. He doesn’t strike me as a man who makes hasty decisions or runs from life’s many hurdles. Is he happy his Olympia MC got canned from the biggest amateur show in bodybuilding? Probably not, but is he going to fire him too, creating a domino effect? I say no. I’m of the opinion that the same way Jake didn’t cancel Shawn Ray, he won’t be firing Bob in some kind of knee jerk reaction. Will this be addressed internally, that, I’m all but sure of, but I don’t think Bob’s job at the O is in jeopardy.

Further, I think Bob is already onto future plans. Did he get paid? None of my business. Will he MC the Nationals again? Who knows? I certainly don’t. Would I be surprised if he MC’s the Nationals in 2022? No.

In a very real way, the news of this firing, may very well draw out Bob’s fiercest critics, much like the news stories with Shawn Ray did a few weeks ago. Many will call for a changing of the guard, pushing Bob out, and demanding all sorts of concessions they’re never going to get. Then again, let’s wait and see. Let’s wait and see.