Are Machines Better for Shoulder Training? 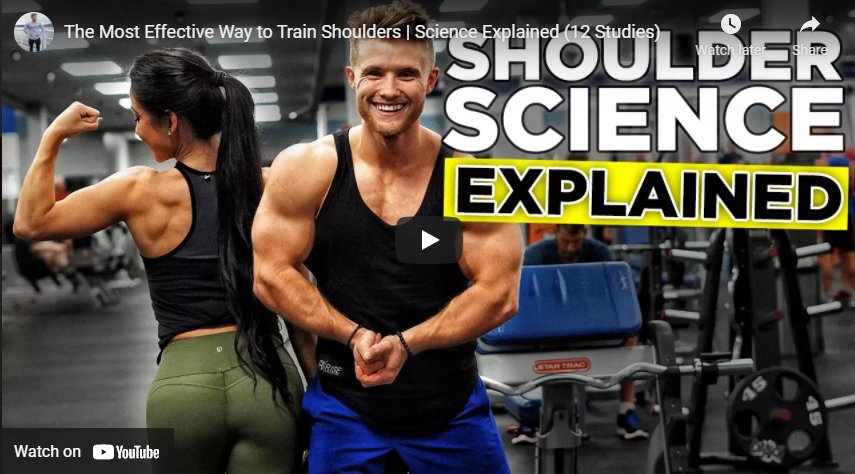 Bodybuilding is about creating the perfect physique. You can’t have big arms and no chest; you can’t have a huge torso, standing on toothpicks. You can, ultimately, do whatever you want, but if you aspire to create a look like that of the golden era of the sport, then you need to have symmetry. You may not need to have the kind of flow that’s required to compete at the national level as an amateur or among the elite level of pro bodybuilders, but you need to have balance – that’s what separates bodybuilders from fit people.

This balance comes at a price. In order to build a symmetrical physique, a lifter needs to account for their time in the gym, and create a game plan (or a split). If lifters didn’t have a plan each week, they might fall prey to spontaneity. There’s nothing wrong with that approach, only that there’s a temptation to overtrain fun bodyparts like chest and arms, while undertraining other muscle groups like legs, back, and shoulders. The truth is, if most people could train chest, arms, and abs everyday, they would, but they wouldn’t look like bodybuilders.

Having a split is key; it keeps lifters accountable. That being said, while back and legs aren’t as big on social media and very few mainstream people care how much a person can squat or pull, they’re fun for people who like break through PR’s and put up big numbers. Moreover, between all the many accessories that are made, from belts to straps to leg wraps and more, there’s many ways to ensure that the athlete won’t get hurt. The same can’t be said about shoulders.

While having great delts puts the final touches on building a great physique, shoulders are among the most injury-prone muscles of all. Most of the injuries I hear about on the baords and through interviews, involve some kind of shoulder injury – particularly rotator cuffs. Some guys can even hurt themselves using minimal weight, but their range of motion might be off. Others might hurt themselves holding the bar too wind on bench presses. The bottom line is, there’s a growing camp who believes lifters should avoid old school bar and dumbbell shoulder movements. The risks far outweigh the benefits and while there’s mesh procedures available for shoulder injuries, a lot of people are just never the same, afterwards. This is why so many people in they gym would rather work around shoulder injuries than address them surgically.

So the big question is, can you get the same gains with machines than you can get with barbells and dumbbells? Purisists are opposed to many machines because they feel that they take a lot of the key work out. While the lifter may still be lifting heavy, in theory, the machines do all the balancing and stability work. This is why you’ll seldom see seasoned physique-based athletes squatting or benching in a Smith machine. Many take exception with the fact that 45lb bar can be moved with just a finger.

Is the bar really 45lbs, if it’s that light? It may not be, but bodybuilders are also not powerlifters. Physique-based athletes are obsessed with being strong, but they’re not scored on it. But what if we’re not talking about competitors? What if we’re talking about people who simply want the bodybuilder look?

Well, the same can be said for them, as well. There’s no correlation between heavy lifting and creating an aesthetic physique. The main idea is to stimulate the muscle & eat a good diet. Do you need to lift a car to have round pecs, capped delts, and good arms? I’d say no. The truth of the matter is that machines breakdown muscle tissue just as well, reducing the risk of injury. When it comes to shoulders, there are many exercises from the old school that are simply fattening egos, but not necessarily doing much to create the desired look.

Take behind the neck presses, for example. While these looked great in pictures and videos from back in the day, they’re almost a guarantee for shoulder and neck injuries. The Barbarian Brothers used to love doing these. They’d do 225, sometimes 315, and occasionally go as high as 405. Even at 315, can you imadine doing that with a barbell, even with a great spotter, at 30, 35, or 40 years of age? Maybe folks could get away with such meaningless feats of strength in high school and/or college, but as we age, we start to become more susceptible to injury, and healing becomes that much more difficult. Further, what’s the benefit of being strong at this exercise?

Another exercise which poses a high risk of injury, are standing military presses. These are purely ego lifts. They’re dangerous to execute in a crowded gym; the lifter mustn’t rely on explosive strength or momentum and the rep range needs to be carefully studied. Unless the lifter is in an olympic training facility, they can’t just let a bar with 135, 225, or more, just drop to the ground. Not only will that destroy the floor, it could hurt others, and it could easily hurt the lifter. What’s worse, the lifter might be injured and not even know it. There’s simply no need to be doing seated behind the neck presses or standing military presses; nonetheless, tons of people still do them.

Dumbbells aren’t much safer than straight bars. No one is equally strong on both sides. A lot of people are stronger on their dominant side (e.g. their writing side). It’s almost unheard of, to find someone equally strong with their left as their right – or vice versa. One side is always pushing or pulling more than the other. This, coupled, with posture and range of motion could contribute to the safety or danger of a lift.

Machines do the balancing for you, thereby reducing the risk of injury. When it comes to shoulders, which are already more susceptible to injury, it makes far more sense to use machines and cables over dumbbells and barbells. Presses can be accomplished with machines, just fine, as well as flys and raises. In fact, once a lifter is on a machine, there’s less temptation to go heavier than necessary.

The fact someone is on a machine, by default, takes a great deal of the spotlight off of them. No one who’s on a machine is looking for attention; therefore, there’s less need to lift like a monster. That whole mindset is no longer a pressing concern. Truthfully, that mentality is the real culprit in injuries. The key to going to the gym, is doing the work that’s necessary to build. The showing off, should come at the culmination of all efforts. This is what tanning at the pool, walking the beach, and/or hitting the mall is all about. I can assure you, no one cares how strong you are at the gym. Still, most people live for the day when the whole gym is fixated on their feats of strength. It’s a recipe for disaster.

The truth is, I’ve seen countless athletes who have built beautiful physiques – all on machines. I’ve seen guys who look like larger-than-life freaks, who train exclusively at Planet Fitness.

Also, look at some of the best-built prison physiques. Those guys don’t have free weights, much less machines. Many of them train with their own bodyweight, towels, and bags of sand. They don’t have access to great food or exotic supplements, but somehow they make it happen. But don’t take my word for it. Get on YouTube and take a look at what some guys have been able to achieve while locked up. Also, walk into any Planet Fitness, anywhere, and you’re bound to see some pretty impressive physiques. Therefore, not only can it be done, it’s done all the time.

The bottom line to good training, is keeping the muscle guessing, contracting it, and employing various techniques (e.g. high intensity, high volume, rest/pause and training to failure). I, personally, believe that these goals can be achieved by including machines and/or relying on them, exclusively.