Newer PostDexter Jackson May Not Call the Olympia His Farewell Show
Older PostLooking to Have Some Supplement Fun This Easter?
Share on FacebookShare on TwitterShare on LinkedinShare on Pinterest 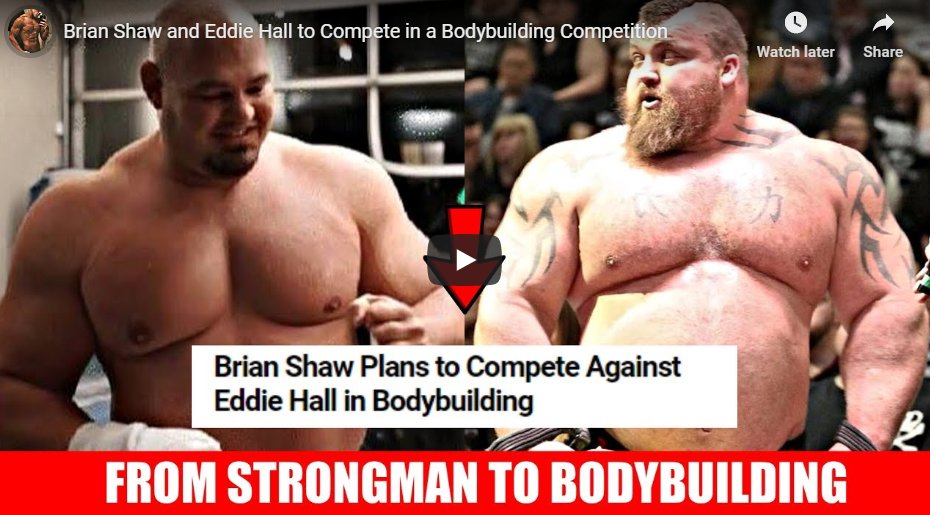 The worlds of strongman and bodybuilding were buzzing as Brian Shaw’s decision to throw his hat into bodybuilding went viral. Towering at 6’8, the 4x World’s Strongest Man, isn’t about to shy away from a challenge. Shaw, who is very active on social media, has competed against 2017 World’s Strongest Man Eddie Hall for years. Hall, who stands at 6’3, seems up for the challenge, but the only question is, can either of these guys truly transform their physiques to that of famed strongman/bodybuilder Larry Wheels.

This type of crossover could be really big, bringing bodybuilding adherents to strongman, and strongman fans to bodybuilding. It would truly be a show within a show because wherever these two battled, throngs of fans would come out and buy tickets simply to see their two strongman heroes on stage. The plus for the event is, they won’t be able to not see all the other competitors and the world class production, provided these guys decide to compete in the NPC. When you have the opportunity to compete, it’s a no brainer to want to compete with the very best. Critics, on the other hand, don’t think it’s possible. Both of these guys are in good shape for strongman, but they would have to lose a huge amount of body fat, more than likely losing muscle in the process, in order to be competitive in a physique-based sport. Worst than losing muscle, though, these guys will more than likely lose strength. Is it worth it?

There’s a few things to consider here. For starters, one look at social media, and it’s abundantly clear these guys love competing. They’re competitive and they’re friends. They’re also extremely gifted, with the ability to lift massive poundages and the endurance to compete in a sport that offers few, if any, shortcuts. Powerlifting, too, is a strength sport, but I’d say strongman takes it to a whole other level. Neither one of these guys can afford to lose their edge in their primary sport. Bodybuilding and strength-based sports are by no means on the same playing field. Training methods are different, caloric-intake is different – they’re simply two different worlds.

Nonetheless, if both of these guys were serious, the first question I’d ask is, are they looking to compete against each other, simply to see who comes closer to looking like a bodybuilder – or – are they both taking this challenge so seriously, that they will want to look like bodybuilders in general? If their goal is to win, they’d have to totally transform their physiques. Larry Wheels has the best of both worlds, but that’s also his calling card. I hate to sound defeatist, but not every strongman can do what Larry has. In fact, I don’t even think that that’s being negative. That’s just being real.

It’s one thing to powerbuild your whole career, like a Larry Wheels, Mike O’Hearn, Johnny Jackson or Ben White, but it’s quite another to just embark on this approach out of nowhere and expect to see immediate results. Anyone who thinks, even, elite athletes can do this, overnight, is nuts. Yes, some athletes have the genes and the work ethic of 10 men, but Rome wasn’t built overnight. Plus, why even test the limits?

When you’re on top of the world, any drastic change can have dire consequences. What if after their bodybuilding challenge, they try to recomp, eat more, but find they’ve lost strength? Even a 2-5% loss of strength, which to us would be minimal, might spell disaster for them businesswise. Others might argue that their strength wouldn’t go away, even given drastic changes to their diet and training over a 4-6 month period. But who’s to say 4-6 months would even be enough time? These guys have set metabolisms, their bodies respond to x amount of calories, to a certain kind of training; I just don’t see how they’d be able to transform in just months. Something like this would take years. All the more reason, I’m calling bullshit.

There’s also the chance that this challenge will be just for fun. Maybe they’ll get some laughs out of it and maybe they might make an impressive, albeit minor, transformation. That would be the only way this challenge might be feasible, while still not hindering their abilities in strongman. As long as it’s marketed as such, that might be ok. The downside, though, would be if their transition to bodybuilding was hyped as strongman’s best looking to be bodybuilding’s best. If they re-emerged and looked like crap, then they’d not only embarrass themselves, but, arguably, embarrass the entire sport of strongman. Also, if they do this just for fun, they also need to be sure they don’t mock the sport of bodybuilding in the process. I mean, bodybuilding is a serious sport, so if their plan is to make a mockery of it, that’s also not going to bode well for them financially or in terms of PR and branding.

As of right now, we don’t know much. We have some interesting quotes, we know these guys are both super competitive, and we’re all stuck at home, bored to tears and reading everything in the news. Something like this seems very intriguing and has snowball effect written all over it. I, personally, doubt these guys will make the jump and I’d bet that in a week or two, maybe a month at most, they say it was a bad idea and/or distance themselves from it, entirely. I’m going to bet on the latter.

What do you think? Do you think two of the world’s most successful strongman champions, making huge money and getting huge press, would jeopardise all that, just to compete against each other in a bodybuilding show? If so, why? And if not, could this be clickbait or a little pre-April Fools Day gag?