WIll Kai Greene Compete at 2020 Olympia? 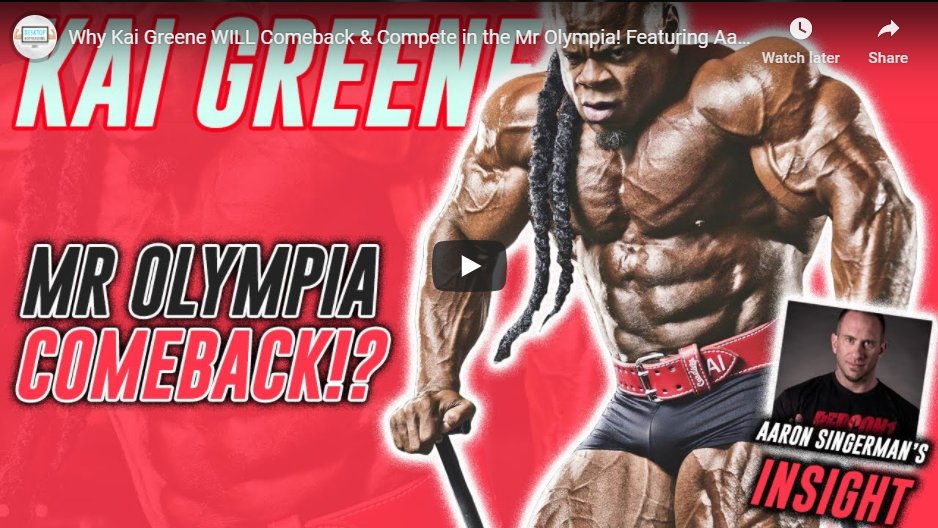 Kai Greene is no stranger to headlines. He knows exactly what to say, who to say it to, and how to maintain a high profile, though, seemingly preferring a low key existence. How else do you explain the fact he remains the world’s most popular bodybuilder, yet he hasn’t competed in half a decade? Don’t believe me? Compare any active or past bodybuilder (except Arnold, of course) with Kai. Compare their social media platforms. I don’t care what platform. You want to pull Youtube subs, Twitter followers, Facebook likes? Whoever you pull, Kai will beat out because Kai Greene has long transcended the stage.

Others have tried their hand at the movies, guys like Kevin Levrone come to mind; others have tried their hand at supplement companies (e.g. Jay Cutler, Ronnie Coleman), but few can compare their success with Greene’s. The Predator has his hands in everything. From his role on Stranger Things, his award-winning podcasts, his series of e-books and even his personal training programs. When you stop to think about how many active and passive income streams the Brooklyn native has, you start to see why so many people are driven to be a part of projects with him.

Most bodybuilders don’t know much beyond the stage. Many, including Phil Heath, weren’t able to connect after leaving it. Kai hasn’t competed since 2016 and never looked back. Phil was barely gone two years and found himself back in the mix, from doing a documentary to signing a contract to compete at the 2020 Olympia. Did he do movies? Is his supp line selling out? Do people want to read his books? No. The same can be said of Big Ramy and quite possibly guys like Dexter Jackson. There’s nothing wrong with making a killing with the sport, but what happens when the sport is no longer the focus? Kai is always ten moves ahead. If he comes back, it’s more so for the novelty of it, maybe for the fans, but there’s a million different things Kai can do to make money – none of which include the uncertainty that comes with bodybuilding placings, the stress of months in prep, or the pettiness and drama associated with the fitness press. Nonetheless, Kai (like Arnold) got started with bodybuilding and 2020 may be Kai’s version of Arnold’s 1980 surprise last show.

Although Kai has seemingly moved on from the competitive side of the sport, the fans haven’t been able to let go; they want to see Kai back on stage because they believe he’s, essentially, an uncrowned Mr. Olympia. There were three historic battles between Greene and Heath, where the decisions were razor thin. Many people feel that Kai wasn’t allowed to win. They pointed to photos/videos that may have cast him in a poor light. Others opined that Greene was simply too much of a maverick to be the sport’s top champion. Others put the blame on the Brooklyn-based competitor, comparing him to Flex Wheeler, suggesting he simply didn’t want the title badly enough. Whatever the reason(s) may have been, people simply can’t stop talking about Kai’s competitive days and with the return of Phil Heath, they’re pinning all their hopes that Kai will follow his lead.

Kai is the king of flirting with fans about a comeback. He knows exactly how to toy with the media and string the fans along. Don’t get me wrong, he loves his supporters and he’s great to them. That being said, he understands the business side of the sport, too. Competing isn’t really about the fans. Sure, the fans love seeing all the prep footage, they love the baiting that goes on at the press conference, and they surely love the battles on stage, but he knows how much money he’d make the promoters if he did compete. For someone on Greene’s level, he’d probably want to be sure the reward justified the effort and with so many different projects he’s involved with, going back to competing hasn’t done it. On the flipside, age is becoming a factor. He’s now in his early 40’s and while he still looks every bit as impressive as he did when he was winning in Columbus and taking 2nd in Vegas, he’s also five years older. That being said, how good does he really look?

On a recent interview with Ron Harris for Muscular Development, Aaron Singerman discussed the decision to sign Greene to Redcon1 and also of a photoshoot they had planned for him. Now mind you, bodybuilders always tighten up for the cameras, but not to the extent Greene had. Singerman remarked that The Predator was weighing 304lbs and looked like a bodybuilder that was three weeks out from the Olympia. It’s one thing to do a minicut for a modfeling session and it’s quite another to look like you’re getting ready for the biggest contest in bodybuilding. Kai is always in shape, but to look 3wks out at 304 lbs is quite frankly jaw-droppoig.

What’s also very interesting about Aaron’s interview at MD is that it was confirmed Kai Greene would be at the Olympia, possibly handing out trophies, or maybe at the sponsors area. The point is, here you have one of the best bodybuilders in the world, looking insane, and will already be at the event. Even if you take into account that Kai has become the king of flirting at comebacks, it really ups the ante because if he was ever to compete, what better year to do it, than now? Also, having just signed to RedCon1, he no longer has the obligations of running his own supplement company so he might use the extra time to compete again for a run. Even though he’s very successful and makes a ton of money, bodybuilding was where he got started, and no matter what era of we time we’re in, being a Mr. Olympia makes you a part of a very elite club of athletes. It’s a title that truly enhances a resume.

In addition to the big pay day – and Jake Wood has certainly increased the prize money to a pretty hefty amount – the Mr. Olympia is a title that opens doors everywhere. Imagine everything that Kai has accomplished without it, to quite possibly have it among his many achievements. Further, it’s not like he’d have to prep or jump through any hoops. If his physique is there and all he’d need to do is dry out; what’s he got to lose? The next question becomes, can he win? And that’s a no-brainer. Of course he can win, but even if he didn’t, what better way would there be to get back into competing than that? Imagine he competes, takes 3rd, and goes onto win another Arnold in March and possibly returns to the Olympia stage in 2022 and wins a Sandow. I’m not saying Kai needs to do it to be successful, but if I were to bet, I’d bet that winning a Sandow remains at the top of his list.

My prediction to win in 2020 is Brandon Curry, and that includes if Phil, Kai, or Ramy compete. That being said, Kai could be very, very compeititve and would have a very real shot to win – if he really gave it 100%.