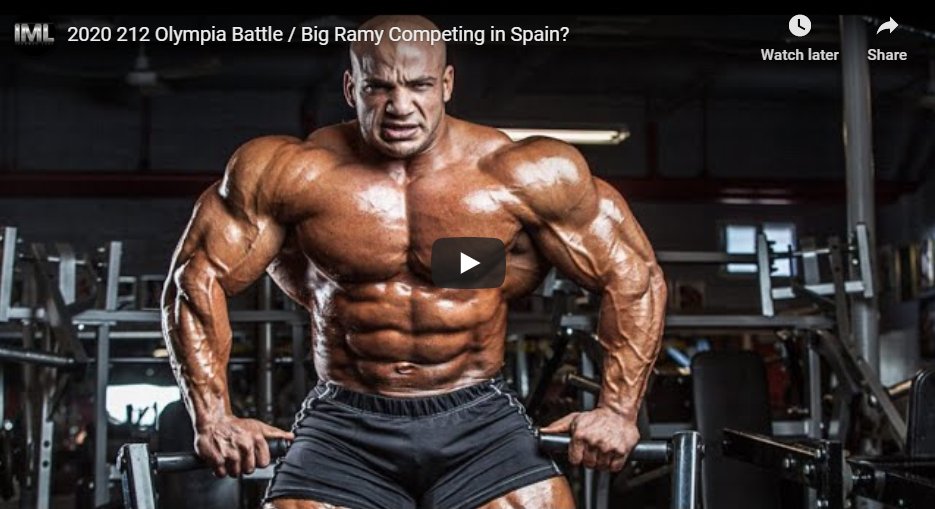 Here’s the deal folks, when you’re a top tier bodybuilder on the level of Big Ramy, competing is what it’s all about. I always half chuckle to myself when pros decide to take entire years off, as if they were ageless. I totally understand and even advocate new pros taking 1-2yrs to put on size and fix flaws, but they’re in a unique category. It makes total sense for a new pro to do that; however, when you’re at the top of your game, you don’t just throw an entire year away.

Big Ramy made a significant comeback this past March in Columbus, OH. For starters, he returned to the stage. That was a huge accomplishment because after missing last year’s Arnold, then Tampa, and then the Olympia, it created a great deal of uncertainty among his fans. The fact he did a full prep with new coach, Chad Nichols, was also another big win. Remember, Ramy runs through coaches like we go through paper towels. He’s been with Dennis James, Chris Aceto, Oxygen Gym and then there was a very brief stint with Neil “Yoda” Hill that didn’t even see a contest. The fact Ramy linked up with Chad and made it the whole way to the contest – is another feather in his cap. Ok, here’s the real big feather, though. Ramy looked really, really good. One might argue that he went to Columbus expecting a win – why else would he compete?

The problem is, he was up against Arnold Classic champions in William “The Conqueror” Bonac and Dexter “The Blade” Jackson. Going back to that now-famous line of Bob Cicherillo’s, “bodybuilding is all about apples and oranges,” it makes perfect sense. Ramy represents mass and he faced two of the most prominent competitors known for condition. While mass usually prevails at the Olympia, the Arnold cast its vote, with Ramy not winning or placing runner-up, but taking third. Now, after that great outing, having all his ducks in a row, and with the Olympia moved to December, you’d think Ramy would have been actively pursuing qualification. He hasn’t though. On points, he doesn’t have enough, but if he did Spain, that would be a game changer.

The Europa Spain is going all out. Not only does it offer pros another chance to qualify, but unlike any other contest on the pro circuit, the Top 3 will get qualifications. For a guy like Ramy, who’s placed as high as 2nd at the Mr. Olympia, not doing this contest, would be a huge missed opportunity. The bottom line is, he has to do it.

Listen folks, Ramy is one of the nicest, most humble bodybuilders on the planet. When it comes to size, no one beats him. Does he work the hardest, does he diet the hardest? These are things that I’m sure a marketing department could make the case for, but do I know for sure? No. What I do know, is that when he’s on, like for his NY Pro victories, he’s extremely hard to beat. But let’s not talk about years ago, let’s just talk about months ago. If Ramy brings what he brought to Columbus to Spain, he’ll win the contest – hands down!! If he comes at 85-90% he will probably get 2nd or at least 3rd. But wait, why would anyone knowingly go into a contest at anything less than a 100%?

The problem with competing at the highest levels of bodybuilding is how taxing the process is on the body. Guys like Ramy got used to being on top. When you think about, 2020 was the very first Arnold he’d ever done. It simply wasn’t a contest that was seen as necessary for him to do in the past. When you compete at the Olympia, each and every year, getting automatically qualified, why are you going to go compete on the 2nd biggest stage or the 3rd or the 4th? You’re not.

Guys like Ramy were always in the Top 6; therefore, they could spend each year working the expo circuit on behalf of their sponsors, making DVD’s, and racking up lucrative special appearances – from guest posing dates to seminars to in-store demos. It’s only when you fall out of the Top 6 that now you have the burden of qualifying breathing down your neck. Guys who aren’t in that pack have to win a contest or qualify by points. Some anomalies, like Dexter Jackson, aren’t going to go that route, though. In 2019, Dexter was adamant about qualifying – like everyone else – so he threw his hat into Tampa and won the contest. Interestingly, Ramy was supposed to do that show and didn’t. Was it because of Jackson? I don’t know. The fact is, though, Jackson beat him in Columbus in 2020.

A guy who’s placed as high as 2nd at the Olympia needs to save face. He took 3rd in Columbus this year and will likely do very well in Spain (if he competes there), but the question is, does he come in at 100% there and win hands down – or – does he take a gamble and bring just enough to land a spot in places 1st thru 3rd? If he takes 2nd or 3rd to anyone other than a Top 6 Olympian, he’ll qualify, but his stock in the industry might drop more. Even though it’d be a strategy move, your perception among the fans can translate to how much you earn and how sought after you are by companies in the industry.

If Ramy brings 100% and wins in Spain, the question then is, can he do it again in Las Vegas in December? It’s one thing to compete in Columbus in March and then six months later in Vegas, but to compete at 100% and then do it again less than three months later is quite another. If we were talking about a guy like Darrem Charles, in his prime, I’d say that wouldn’t be an issue at all; however, for a guy who’s only done one show a year, to now do 3, with a new coach and all at 100%… that’s going to be tough. Can Ramy do it? OF COURSE he can, but will he? Will he be able to pull that off?

Also, what if the Spain show is like the Arnold? What if it’s all about condition? Can Ramy come in as ripped as a lighter guy? And even if he could, does he really want to change his look at this point? Size is Ramy’s calling card. If he’s ever going to win the Olympia, he needs to hone in on what made him famous. Right now condition is what’s hot, but all it takes is one win and that can all change. If Ramy wins the Olympia, size will once again will be the most sought after look. Reigning Mr. Olympia Brandon Curry does bring muscle density, but he’s not a mass monster. I think Ramy at 100% will have a hard time edging out guys like Jackson, Lewis, Bonac and Curry, but even before that decision can be made, he needs to get to the big dance.

This article has seen more questions asked than bold statements and predictions made. It’s definitely a first for the ole Iron Duque. So what say you? Will Ramy do the Spain show? What percentage of quality will he bring? And if he qualifies and takes the stage at the Olympia, where do you see him placing?