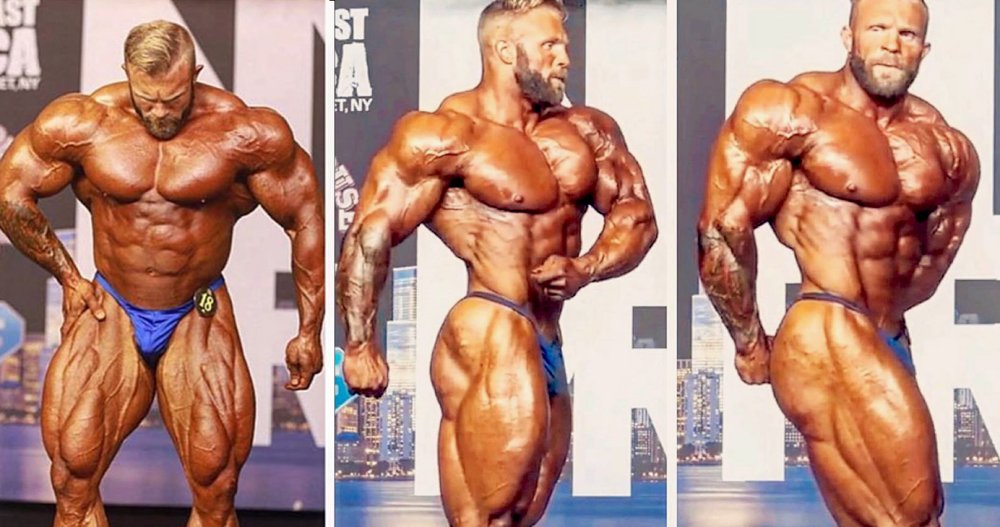 Taking second place does something to a competitor. Being Top 6 is great, Top 5 is even better, and being 3rd means you’re on the verge of greatness. You’re so close, it’s almost a foregone conclusion that one day – very soon – you’ll be in top spot. 3rd means you still know what you need to do, you can still make adjustments, still address minor flaws, and you improving is the key to your success; however, what about 2nd place? The runner-up spot has got to be the most psychologically perplexing placing of them all.

To some, second place is, first place loser, but that’s largely hogwash. The reality of the matter is that placing 2nd stings and it especially stings when the competitor knows they’re not at their best. There’s, of course, many different ways to peel an onion. Some might gloat at the fact they took runner-up, even as the wheels were about to fall off their physique. To some, that’s a great outing. You get points for the O, a check, and some press. But to a guy like Canada’s Iain Valliere who placed 2nd to the rookie Hunter Labrada at Tim Gardner’s Tampa Pro, I think it really lit a fire under him.

Iain traveled alone, his tan was off, and he just didn’t look his usual self. This isn’t to take away from the very impressive transformation Hunter made from the 2018 NPC Nationals to his first pro contest, but did he beat Iain at 100%? Of course not – and no one knew that more, than Iain himself. If the guy were a slacker, he would have been fine with his placing and maybe called it a year. A runner-up spot at, arguably, at the 4th (or 5th) most important bodybuilding contest is pretty damn impressive, especially given the tumultuous year 2020 has been. But Valliere is anything but a slacker; he got back on track and a month later, was back in Tampa for the 2020 IFBB Pro League New York Pro.

Before going on, I’d be remiss if I didn’t tip my hat to Steve Weinberger, the promoter of the NY Pro. The fact is, had he not made the bold and decisive decision to move his contest from NY to FL, it likely wouldn’t have happened. The contest was run flawlessly, with tickets sold at 33% capacity, as well as state of the art Livestream and PPV options. The contest coverage provided by NPC News Online was also second to none. This is the NY PRO after all, the 3rd most important bodybuilding contest on the pro circuit!! Whether it’s in Tampa or Timbuktu, Steve ensured that the production value was exactly what the fans were accustomed to and he delivered!!

For those of you that didn’t get to see any of the highlights, you most definitely should catch the interview Iain did for NPC News Online. Even after it was all said and done, one look at the amount of size and density the Canadian superstar brought to Tampa, and you almost have to wonder what this guy can put together over the course of the remainder of September, October, November and half of December. Knowing that you’re going to the big dance takes off a substantial weight off of a competitor’s shoulders. The fact you have a guy this big, who can dial it in for two top tier contests, basically just a month apart, proves that he can do multiple contests without losing his head. His interview gave us a glimpse of a few key factors that also make him very dangerous. He was cool, calm, and collected, both during his interview as well as on stage. He’s also an athlete who puts 100% of his trust into his coach. That’s very important because a lot of guys on this level, tend to second guess their gurus, especially after a win as big as this.

What’s crazy is how far Iain has come. People always like to look at a champion and presume no dues were paid, that they just woke up one day and decided to win a pro show. Although Valliere has been competing for quite some time, New York is his first pro win, and given his previous Olympia placing, no one would ever have thought he’d win the 3rd most prestigious bodybuilding contest that soon after – but he did! Who knows how he would have placed at Tampa, had he brought what he did for the NY Pro. Although momentum doesn’t account for anything on the scorecards, this win at the NY Pro will undoubtedly create a truckload of hype for the Canadian superstar as he hunkers down and preps for the biggest contest in bodybuilding. What’s also crazy is that both the Tampa and New York Pro events, coupled with Chicago and Spain, will probably have more buzz than even The Arnold!!

The Arnold Classic happened just when COVID 19 became headline news; so much has happened since those days and quite frankly, very few people remember where the chips fell, there. Bonac took a commanding victory, Jackson placed a very respectable 2nd, and Big Ramy (backed by Chad Nichols) scored an impressive 3rd place in his first-ever outing in Columbus, OH. That being said, that was before the storm, it’s like it was another year as far as most peoples’ recollection goes. In a very real way, Labrada, Valliere, and the winners of the two succeeding contests will generate more conversation on the message boards, social media, and on the vast sea of bodybuilding programs, podcasts, and news sites – like Iron Magazine, than those who did well at the 2nd most prestigious contest in the sport.

The 2020 Olympia is really shaping up to being one for the record books. You have a first-time defending champion in Brandon Curry, multiple Olympia champions, and guys like Iain with big wins under their belts, who maybe last year wouldn’t have been considered as potential Top 6 threats.

Listen people, you don’t go and win the NY Pro and not get on everyone’s radar. Iain just dove into the Top Tier of the sport; he’s now among the big boys – literally and figuratively speaking.

The biggest contest in the sport will also have key battles at play within it. The rematch between Curry and Bonac, Flex Lewis trying his luck in the Open, the possible return of Big Ramy, Heath vs Curry and oh yeah – the rematch between Iain Valliere and Hunter Labrada. These are the battles – all in good fun – that will make the crown jewel of bodybuilding contests the mega hit it’ll be. I have my room reserved, do you?

Where do you see Iain placing at the Olympia? What do you think the future holds for him?