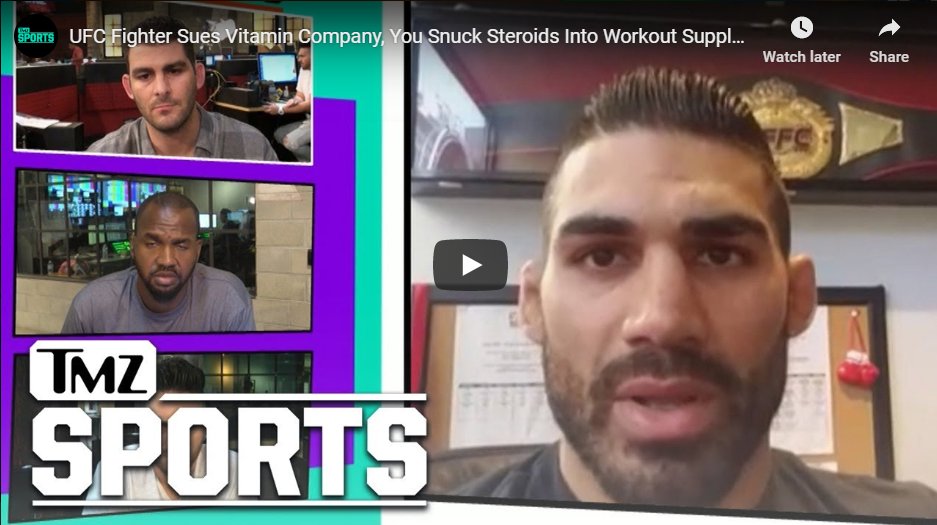 I’m not sure what it is with athletes these days who think this product or that product contained steroids and caused a “false positive” in their mind when a drug test came back giving them the news that gets them pulled and disqualified from competition. In most cases, it’s simply the athlete taking something they weren’t supposed to, and it was considered a banned substance. Rather than taking the blame, they point the finger at the supplements they’re taking.

However, every once in a while, what the athletes are saying is truthful and the supplements they were using actually contained steroids.

In the case of UFC fighter, Lyman Good, he blamed Gaspari Nutrition for a tainted product but after suing the brand, he quickly found out that things weren’t going to go as he expected.

Let’s Just Sue Everyone… Why Not?

When Good was told he tested positive for 1-androstenedione (1-andro) back in 2016, he was shocked. And for someone who knows they aren’t using steroids, that would clearly come as a surprise. Due to Good testing positive, he was pulled from an upcoming UFC fight and issued a two-year suspension from competition. Later, the US Anti-Doping Agency (USADA) reduced his suspension down to six months after Good claimed the positive test had to come from his use of Gaspari Nutrition Anavite (a multivitamin of all things).

The interesting part of this whole thing is that after Good handed over all of the supplements he had been taking for USADA to test, it actually came back that Gaspari Nutrition Anavite, a multivitamin, actually did contain 1-andro – which now makes sense why he failed his drug test.

Good went through the legal process and decided to not only sue Gaspari Nutrition for apparently putting out a product that contained steroids, but he also sued The Vitamin Shoppe for selling the product that caused him to test positive.

Here’s where the things go sideways. Normally, testing a product and finding it contained steroids would be a fairly open and shut case when presented to a judge. Not this time. The judge dismissed the case and cited that Good did not present enough supporting evidence. Wait… what?

It’s true. Good lost the case because he apparently didn’t supply the lab results as evidence in the case. I mean, look, I may not be the brightest person out there but the key piece of evidence in the case is the actual lab report. It would seem like common sense that the document with the proof of a multivitamin containing steroids is pretty important (but then again, I also haven’t been punched and kicked in the head hundreds of times either).

The judge mentioned that without the actual Sports Medicine Research and Testing Laboratory (SMRTL) results or even expert testimony from the SMRTL itself to present actual evidence, his case was hearsay and was deemed lacking evidence that this multivitamin contained steroids. No, you can’t make this up.

Is This a Real Problem in the Supplement Industry?

I’ve been in the supplement industry for a long time and I’ve seen a lot of things. I’m not going to sit here and say the supplement industry is squeaky clean or that there aren’t a few bad apples out there who are putting products out on the market that have contained steroids – we’ve all heard the stories on the news and athletes, like Lyman Good, who have taken products they thought were approved and safe that ended up causing them to fail a common drug test in their sport.

Do I personally think more should be done in the industry to prevent brands from selling products that contained steroids? Yea, I’ll raise my hand and agree that more should be done. The question is how without completely regulating the industry to the point where it not only costs exponentially more money to put out products due to the need for extra testing and screening, but also the amount of time it would take to get new products to the market.

Does that mean I’d change my position? No. However, the little guys in the industry will certainly die off if they needed to pay for all of the testing to ensure the quality of the product and that exactly what the label says is what’s in it. The thought that we should even have to question that is absurd.

As a consumer myself (and I use a ton of supplements), I want to know what I’m putting in my body. Wouldn’t you? We all have the choice of what products we want to use and what we don’t want to use. What if a natural bodybuilder got tested and it came back that he (or she) tested positive for 1-andro? They’re done. Regardless if you claim natural or not, people who know you used a product that contained steroids will forever call you a cheater – even if you honestly had no knowledge of the actual ingredients that weren’t listed.

And not for nothing, but if supplements are tainted with and found that they contained steroids which needed to be followed up by a post-cycle therapy (PCT) which the consumer didn’t use (because they did not know that the product contained steroids), it could cause some potentially serious health issues.

I’d love to sit here and type out an article with all of the answers to these issues and solve all of these problems, but I simply don’t have it at this point. How can we fix the issue without causing more issues and headaches than we already have? That being said, I do feel that putting products on the shelf that have contained steroids is wrong and consumers shouldn’t remain loyal to those brands – if they do, you’re simply supporting such behavior and deception.

If I choose to not use steroids, that’s my choice and I shouldn’t have to worry that supplements I consume contain them without it being listed on the label.

What do you think about this whole issue? I’m not even naming names here of brands who have been caught. In general, do you feel we have an issue? Let us know down in the comments.