Newer PostWARNING: The US Obesity Rate Now Exceeds 40% of the Population
Older PostHydroxycut Launches Cut Energy Drink… In Dollar General Locations?
Share on FacebookShare on TwitterShare on LinkedinShare on Pinterest 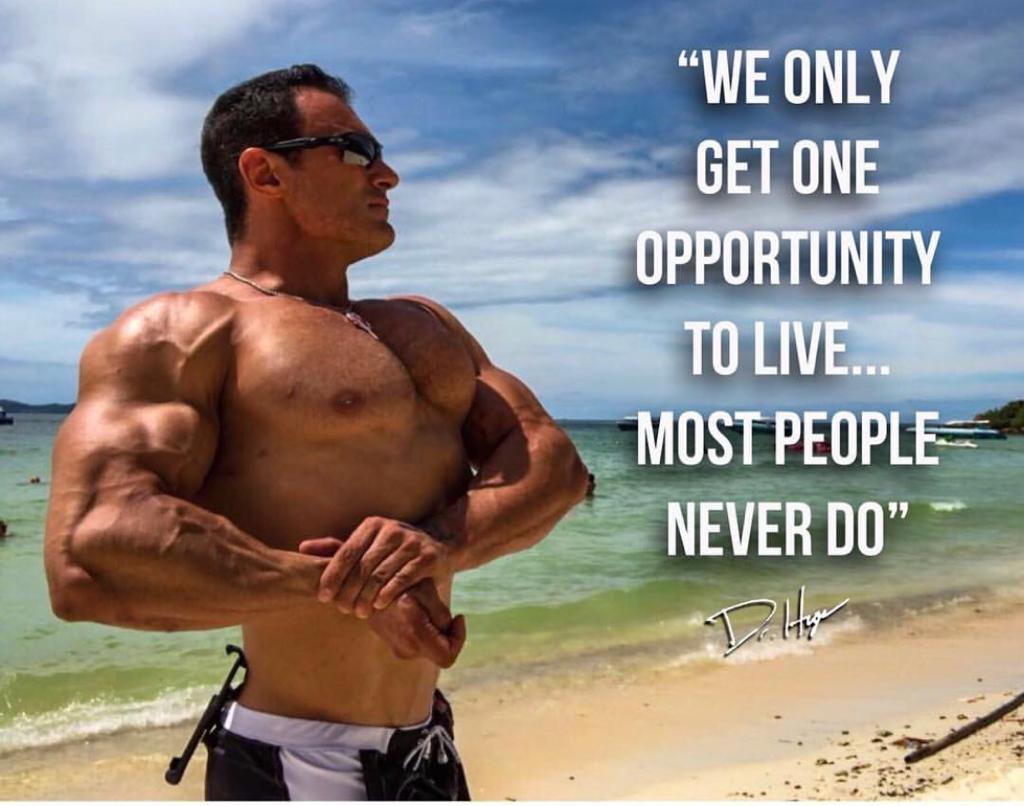 The fitness industry is quite possibly the most competitive, insulated, and cutthroat business in the world. It’s competitive because it’s dominated by alpha males and females. If you’re weak – on any level – you’ll get annihilated. You’ll lose your mind, your business will go bust, and you’ll be all but forgotten from one day to the next. Bodybuilding, as a sport, has been called many things. One concept that tends to stick, is that it’s a cult sport. Some call it a microcosm, others describe it as a subculture. Whatever terminology you may prefer to use, the bottom line is that fitness is very much insulated.

Fitness fashion doesn’t follow mainstream norms. Fitness jargon is distinct from that of other sports. Everything that’s hot, is hot because of influencers and every so often because of unbearable trolls and haters who insist upon an agenda that just takes hold. Guys like Jason Genova and Jason Blaha have created large followings, despite their many shortcomings. Others are known to lift fake weights, yet they have actual heavy lifters looking to them for guidance on technique and execution. Only in the fitness industry would such a travesty be a reality.

Our world is also very much set in a dog-eat-dog atmosphere. Loyalty is an extremely scarce commodity – almost akin to a mob movie. The same guy who calls you brother, could be sleeping with your woman, robbing you blind, and setting you up for everything from being framed to winding up six feet under. Some things are best left not talked about, but rest assured, the backstabbings had in the bodybuilding world are not experienced in major league or Olympic sports.

With all that being said, there’s a select few that make it to the top and an even more select few who stay on top. Dr. Tony Huge has created a very intriguing and very likeable industry persona, he’s surrounded himself with a crew of handpicked people, and he’s been very smart insofar as the path he’s decided to pursue. His rise to the top has been one of record for even more reasons that these. MiNly, he continues to appeal to a younger adult segment of the media than just about anyone his age. Although he’s just in his 30’s, college-age lifters tune into his videos as much, if not more, than those of content creators in their age range. That’s significant in the fitness industry.

Who are you? What are you all about? If your friends and fans can answer these two basic questions about you, then you have a huge leg up on the competition. If your fans, especially, can instinctively answer these questions, then you’re in very good shape in the fitness industry. Let’s get this party started FRIENDS OF FREEDOM…

PIONEERS OF,…, you fill in the blanks because I know you can! Creating a niche in the fitness world is what gives you the launching pad and the staying power to develop into a formidable driving force. I don’t usually call him Dr, though, only because it’s a little misleading, but he does have a PHD equivalent degree. If he wanted to put PHD at the end of his name, that’d be more acceptable, but he’s not looking to be accepted by all. He’s looking to be accepted by his ever-growinig niche in the fitness industry. His name, alone, is that a of bodybuilding super hero. I mean, who wouldn’t want the last name ‘Huge?!’ He’s also got some distinctive mannerisms and facial expressions down. He can totally listen, process, and sum up your entire case with a simple facial gesture.

The viewers, in kind, respond with likes, comments, and shares. Sometimes saying the least does the most. This isn’t a guy who woke up one day and decided he’d be the next social media superstar – or – maybe that’s exactly who he is. When the viewer doesn’t really know for sure, he/she is either witnessing greatness or a guy with some pretty, damn good luck. Anyways, by the time viewers are subscribing, following, buying his supps and parroting his lines, they’re totally on board. Tony Huge fans are hardcore! They don’t just follow him, they’re also on his quest for knowledge. Knowledge is power, but how it’s marketed is also key. You can be the smart jock or the smart geek. Who’s life would you rather have? Tony Huge’s or Greg Doucette’s?

Yeah… Greg would be the geek. He’s a genius, but wherever people hear his whiny, weezing, nasally voice, he’s always sittinig at home, with a bicycle on the wall and his significant other making a noise or saying something trivial in the distant background. That’s reassuring because a guy like Greg could just as well be a loner, living in some hole in the wall, coming home to a hot plate and a can of Campbell’s soup. It’s good he has a cat and another human to coexist with. Tony, on the other hand, lives the life of a rockstar.

Tony is jetsetting in Thailand, surrounded by gymrats, and gorgeous women. So what if among the gorgeous women there’s some ladyboys, Tony Huge doesn’t care – only YOU do. What if he gets called on it, he’ll just raise his arms up in an “I Don’t Give A Fuck” kinda way and the hater-inspired / homophobic-inspired clickbait media’s inquisitiveness and judgment just rolls off of him. That being said, he’ll still answer the questions, keeping the media hungry for more, but he doesn’t care what they have to say. He’ll read it or watch it, to stay relevant with the industry, but he doesn’t pay them any mind. He’s doing exactly what someone on top should do and he’s done it so well that he’s been able to become more of a dominant force.

Huge has also made a point of surrounding himself with likeable people, who are also very knowledgeable, and have that trendsetter/influencer mentality. Take Coach Trevor, for example. That’s a guy who isn’t looking to be famous, he’s not trying to make you laugh; he looks like a more or less blue collar, simple guy, who might even come as boring to some, but his love of bodybuilding is what breaks with everything. He looks like a No Fucks Given type, who goes into the gym and trains like a smart lunatic, and who knows all there is to know about PED’s and even new exotic products. He may have acquired his knowledge through books, but he more than likely picked a lot of it up through his own trial and error. He’s a funny guy by being real. Coach Trevor is perhaps Tony’s most recognizable colleague, that being said – no one would ever call him a sidekick. If Tony is Batman, Trevor is his twin, but he’d by no means would be Robin. That I can tell you for sure!!

There are many in the Tony Huge camp who have amassed certain levels of popularity. Some of the biggest names include Craig Golias and Kenny KO. Craig is one the biggest bodybuilders in the world, with droves of hardcore fans, and Kenny is perhaps one of the biggest YouTubers to hit the platform. Although they’re on their own and, largely, do their own thing, their allegiance to Huge is something of record. If there’s ever a major project, booth work, or just an opportunity to hang out, these big-name stars are always on hand. That includes major productions, from in-house ones to major productions fueled by giants like Generation Iron. Huge might be a huge star, but he shares the spotlight and he promotes his friends. That’s a big part of being a driving force in this industry. If you can share your platform with people who are bigger or stronger or younger or more popular than yourself, that exudes self-confidence and security. People feed off of that because they want to follow real stars.

Tony’s star continues to soar because he’s making all the right moves. How many feuds has Tony Huge been involved with? How many public fights have you ever heard of him being in? There is no need for that. There’s no reason to knock another man to get hits or sell downloads.

Tony’s yearning for knowledge, growing his base, and having fun are key. He’s also making a TON of money, but most people don’t think of that when they watch him. They might be buying his downloads, buying his supplements, or buying his clothing, but they don’t think of him being filthy rich. That’s because Huge never flaunts his wealth. That’s another very smart move.

Real stars don’t want to illustrate the wealth gap between themselves and the average fan. Real stars, in fact, would prefer to push the mindset that there is no gap, there is no buffer. The more successful and the happier you are, the less relatable you become to the people who struggle to make ends, who battle depression, to the people who can’t break through PR’s, whose genetics prevent them from growing and/or who are just plain miserable. You have to choose your battles and you have to choose what feelings you promote. Tony promotes having fun and acquiring knowledge, but if he was also promoting his life of excess, blowing his nose with Benjamins and chugging Cristal, that might turn off a huge chunk of his audience. That might be too much.

All in all Tony is making all the right moves, surrounding himself with like-minded people, and continuing to get bigger and bigger in the fitness industry. What’s your take on the man of the hour?