by Christian Duque Bodybuilders have a tendency to take themselves way too seriously. There’s guys who live that GQ lifestyle, showing off expe 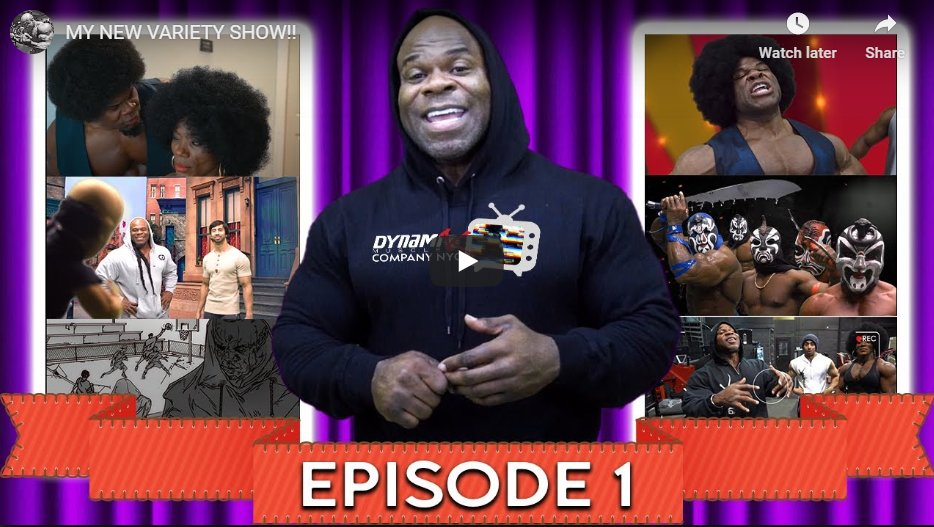 Bodybuilders have a tendency to take themselves way too seriously. There’s guys who live that GQ lifestyle, showing off expensive cars, the snazziest threads, and only post to their social media when they’re eating somewhere elegant, staying at a ritzy hotel, or partying at a club somewhere exotic. A lot of those guys, however, don’t have a pot to piss in, but that’s neither here nor there. The reality of the matter is that fans don’t identify with athletes, whatever the sport, who tend to hold their fame and fortune over the heads of those who support them.

There’s a marked difference between followers on Instagram and real, actual fans in real life. There’s people who are famous on paper and people who actually command massive audiences. Kai Greene has never been about broadcasting his massive audience, how much money he has, or just how influential he is over the sport. Although he’s been off the stage for nearly half a decade, his presence has never been an issue. Unlike Ferrigno, who he’s often compared to, Greene never left the scene. When you consider that Kai has continued to train like he did while competing at the biggest contests in the world and when you stop to consider how much work is involved in him keeping the amount of muscle he packs on his physique, you start to understand that you’re not dealing with some poser. This is a guy who lives bodybuilding, he is bodybuilding.

You don’t need to be that big, train that hard, just to sell supplements. You also don’t need to lift like a top tier guy. How do we know how Kai lifts? Because he constantly documents it and because the training has a direct impact on the physique he’s built. It all plays a key role. His nutrition is also something that makes the rounds. This is a guy who makes a million guest appearances all over the world. He goes to India, Pakistan, China and it’s always the same. He gets mobbed!! In some countries his motorcade resembles that of a foreign dignitary. There’s hip hop stars and rock gods that don’t get that treatment, but a bodybuilder does? Sometimes fans hyperventilate. That’s because Kai Greene, in his own way, has transcended bodybuilding. He’s gotten to the point where he doesn’t need to compete. In many ways, he’s like Rich Piana. Rich wasn’t even a pro, though, but what’d he care? He was the most popular bodybuilder on the planet. The same goes for Kai, but even more so because he is a pro and battled with the best on the Olympia stage.

To a lot of people Kai won the Olympia. He may not have won it on paper, but to millions around the world, he’s their choice. Now that might mean squat in the history books or the Hall of Fame, but it sure means something when those same folks express their buying power. Kai Greene, the brand, has reaped huge returns from Kai Greene, the person. From supplements to e-books to movies and media, fans can’t get enough. They know more about Kai than pretty much every other bodybuilder combined. Kai Greene fans get Kai, they get his theater masks, his headstands, and his, often, deep metaphysical, intellectual schtick that others clown him for. Real KG fans appreciate his eccentricities and they celebrate them. I, personally, love his content because it’s a stark departure from EVERYTHING ELSE we see on Instagram.

I want to challenge you. You already know how we get down at Iron Magazine. We think outside the box. So pick up your phone (assuming you’re reading this on a laptop; if not, minimize this article) and go to your Instagram. Look at every post for the day from people you’re following. Chances are, you’re going to see training clips, meal pictures, supplement-related content and maybe some at-home workout type stuff. You might see the occasional shot of friends and family, maybe something abstract, like street art or possibly something cultural, though these are truly few and far between. Now, go to Kai Greene’s IG, if you’re not already following it.

On Kai Greene’s IG, you’ll see videos of him in drag, a video with him acting as Sho Nuff with a cameo from longtime friend and fellow bodybuilding legend Victor Martinez, and even some self-help type clips. Who else has content like that? Who else is putting that kind of thought and time into their content?

This is why The Kai Greene Variety Show will be a massive success. He’s not only been pushing the card for years, in terms of creativity, but he is a trendsetter and he knows his fans like the back of his hand. The naysayers and the critics, they’ll always have something negative to say, but they’re also the people who hang on Kai’s every word. Stars don’t create with haters in mind, they don’t limit themselves based on what the critics might say. In fact, some of the best writers, directors, and producers in Hollywood never ever read the reviews; many don’t even the [Hollywood] Review or Variety [newspapers]. They quite frankly could care less. Kai is like that. It’s all about the fans.

Haters are going to hate – there’s no rhyme or reason to how they operate. Right now, many of them are more consumed with Kai in drag for a part in his variety show, than what he’s trying to do overall, which is entertain people and create something cool. Ultimately, the question is, are you a fan or a hater? The sport right now is boring, there’s not much going on, so this kind of program can really do something cool to provide fans with something to watch. I’m excited to see what Kai and his team are able to do. Just watching the clip of Kai and Victor was wicked cool. Sho’nuff, the Shogun of Harlem is one thing, but Kai made his character the Shogun of Brooklyn – CLASSIC!! Greene takes the new and the old and makes it something altogether his own. That’s what you call – real talent! Don’t you agree?