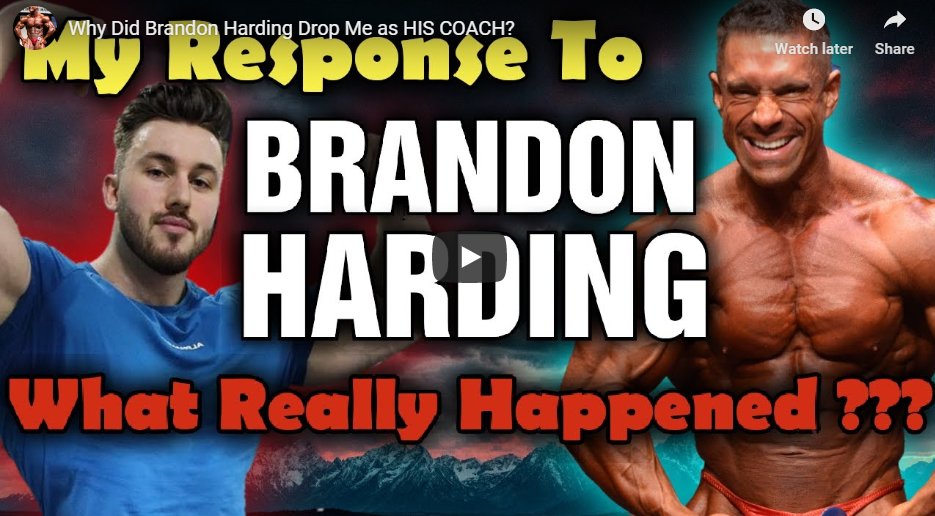 When a competitor finds a coach, it’s very much like when two halves make a whole, with each new day being better than the last. When a competitor finds a new coach, it’s a real brotherhood (or sisterhood); you are no longer two wandering souls, rather, you are one. Concepts of teamwork, loyalty, and transparency get thrown around. Goals get set, followed by a great deal of motivational quotes, fist pounds, and just unbridled enthusiasm.

This is the prep that will define the athlete, that will put the coach on the map. Are you pumped? Are you stoked? It’s like a shot of adrenaline…, that is, until the bumps in the road start to appear. Some competitors will endure, others will stay the course until the tires burn out and the car is riding on its rims, making sparks on the pavement as it screeches by. Some competitors are all gas no brakes, even if their coaches are clueless. That’s loyalty – blind loyalty.

Brandon Harding, on the other hand, hit the eject button as soon as he noticed some muscle loss; the UK European Classic Champion gets mobbed wherever he goes, boasting of half a million Youtube subscribers. He’s built a substantial fanbase, with followers on all social media platforms. In addition to being a groundbreaking content creator, Brandon also designs diet plans and is prepping for what should be a very exciting 2020 competitive season. With that said, everyone was quite enthused to see what he’d do with contest prep coach Greg Doucette in his corner. When the early stages of the prep weren’t quite what Brandon was looking for, however, he fired the Canadian IFBB Pro and moved on. The two went at it in a social media feud, over the last couple of days as the news broke. Brandon left a comment stating Greg was a bad coach, Greg responded, and Brandon ultimately released an apology video just two hours ago. In it, Brandon reminisces about the good times the two had during a Toronto trip and spoke on behalf of reconciliation. Further, Harding made an offer to delete his video, hoping Doucette would erase his, as well. There’s no word, as of press time, if Greg plans to meet the young superstar halfway.

Greg is widely known as an authority on SARM’s, releasing countless videos on research, and gaining considerable fanfare on Youtube. He’s also made various appearances on RxMuscle. RxMuscle is a bodybuilding website, started by Dave Palumbo and Juan Romano, after they were fired from Muscular Development Magazine over a decade ago. Doucette appears on countless programs, along with other aging veterans of the sport, talking about the good ole days. These appearances have catapulted Gregg’s status and given him key inroads into the 50-85 category which frequents the site.

With that being said, Harding has made a point that his channel and his whole approach to social media, is to inspire others. He’d like to move on, imploring Greg to erase his video. The problem with that game plan is that once you squeeze the toothpaste out of the tube, it’s very hard to put it back in. Even if both Brandon and Greg erase their videos, the trolls won’t let go of it anytime soon. Actions always speak louder than words and to his credit, Harding tried to keep the news of switching coaches as low key as possible. In fact, Harding hasn’t been working with Doucette for over five weeks!! I had no idea about the split, but the news was bound to come out.

IFBB Pro Nick Trigili was the first big-name industry journalist to break the story, weighing in on Doucette, his credentials, and his approach to building an audience on Youtube. Nick is a total pro, even fully disclosing any biases he may have had, including that Doucette declined doing an interview with him ages ago. He did say that recently, however, Doucette has expressed interest in collaborating, but Trigili was very transparent insofar as where he was coming from in breaking the story. That being said, Doucette hasn’t engaged Trigili and more than likely won’t be doing so in the future. That would be a very bad move.

Greg, also, currently finds himself engaged in a related skirmish with Greg O’gallagher, who runs the wildly successful Kinobody Youtube channel. O’gallaher boasts nearly double the amount of subscribers as Doucette, with 500,000 to his credit. Doucette and O’gallagher are now embroiled in a tit-for-tat bickering match, that’s likely to spiral out of control. With Harding out – whether extending the olive branch or waving the white flag – the young superstar has had enough. He’s definitely taken the high road, but a war with O’gallagher could prove quite rewarding for Doucette. I could also see where Dave Palumbo may want to get some hits, by inviting the two to Iron Debate or some other kind of program, where Doucette’s 250,000 subscribers and O’gallagher’s 500,000 subscribers would hopefully visit the bodybuilding website, subscribe, and become fans in the process. The classic Megadeth album title comes to mind, “Peace Sells, But Who’s Buying?”

It’s very possible that Greg will meet Brandon half way, but it’s unlikely he’ll stop bickering with O’gallagher or others who try to carry on the fight that Harding walked away from. Also, even if though Brandon may have apologized and even if he feels bad about what transpired, the fact still remains that he was unhappy with Doucette’s prep and ultimately fired him. That’s a very significant detail because it may very well affect Greg’s online coaching.

Critics of Greg Doucette have expressed concern that his interests may be compromised. Detractors feel that contest prep should be his primary focus, however, others believe he’s investing a great amount of time and energy on building a Youtube following. How much is Greg making off of Youtube and is social media a stepping stone for other ventures (e.g. acting, motivational speaking, other branding)? I can’t imagine that Greg believes he will ever be as popular or more popular than a Nick Strength And Power. The truth is, with 250,000 subscribers and being the authority on anything, particularly research chems, he does have a better chance than most. Then again, it’s hard to be an authority, when high profile clients walk away.

On the plus side, Doucette’s style is also very unique. He’s loud, full of energy, and at times sounds like he’s been hitting the helium pretty hard. He’s done nearly sixty contests, the vast majority as a natty (which earns him considerable cred), and he’s got tons of fans as a result. Whether he’s engaging with the youth or old farts at RxMuscle, everyone is equally engaged and entertained. His content is very good, his love for bodybuilding is undeniable; he’s also not a cookie cutter like some more popular Youtubers.

The fact Brandon walked may sting a bit more than Greg would like to admit, but it’s also not a huge deal. Coaches don’t ever like to ever concede being fired, but it stands to reason that if a competitor hires a coach, then when the competitor ends the relationship, for whatever reason, he/she has effectively fired the coach. When you get fired by a client with 500,000 Youtube subscribers and when that client goes on record to call you a bad coach, that’s not drama, it’s just an opinion that makes the rounds. Brandon can apologize all he wants, but facts are facts, Greg’s prep didn’t cut it for him and he hired someone else.

Even the best coaches don’t work all the time for all clients. Sometimes people just don’t mesh. On the flipside, who knows if Brandon followed the prep exactly as Greg outlined. You can’t always blame the coach. Sometimes there’s simply no one to blame. Sometimes the spark just isn’t there. It’s quite possible that Greg is a great coach and Brandon is a great athlete and they just work better with others. What’s uplifting, though, is that Brandon has a good heart and wants to let bygones be bygones. I, for one, would like to see Greg give this kid a break and agree to delete the videos. That being said, I think Doucette rather enjoys clowning O’gallagher, his approach to intermittent fasting, and egging him on until the two face off. Perhaps, Greg will keep the feud with Brandon going, even just without addressing it, simply to keep getting attacked by those siding with Harding.