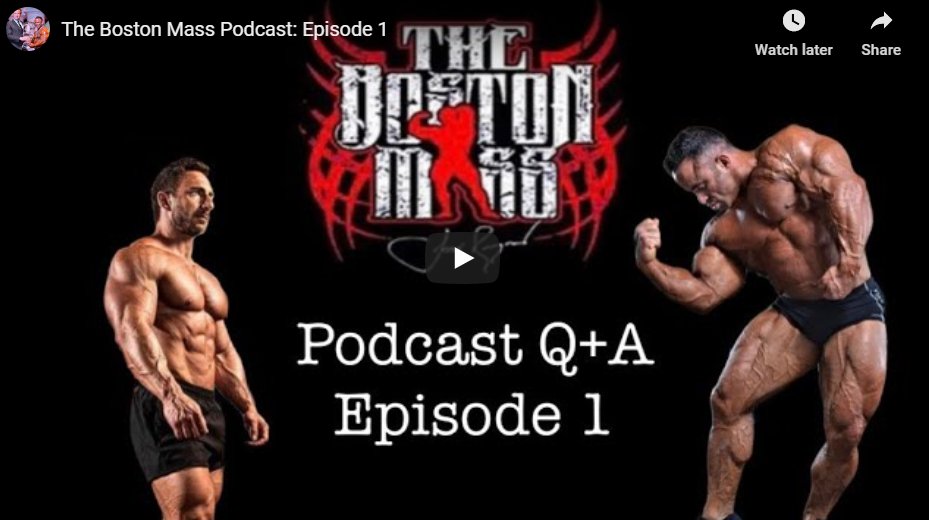 If you like bodybuilding and you like to stay up to date with the sport, then this is going to be an easy sell. I love watching and listening to programs that cover the fitness industry with class. There’s so many websites and so many programs that are all about chasing hits. When your single objective is fame, the concept of ethics goes out the window.

You have no scruples releasing fake news, you strive to put out the most clickbaitish titles you can conjure up, and feed off drama. Drama is what makes a lot of talentless hacks famous – and fast!! For as much as I love bodybuilding video shows and podcasts, I usually find myself exing out most of the ones I discover. I can usually see through the bullshit within 1-2 episodes. Like I said, if fame is your game, you don’t make much effort to hide who you really are and what you’re really about. Some people dig it, but I’ve been around long enough, where I value credibility a lot more.

There are times where there is no news and the really gifted media personalities and journalists can piece something together. Today, I’m very proud to share a real gem of a series with you. IFBB Pro Jose Raymond and co-host Nate Telow have a brand new podcast that has many people, yours truly included, talking about it. This is the kind of program that a pro athlete could watch, as well as a supplement company owner and a fan. It’s called The Boston Mass Podcast and it’s definitely worth your attention. Although it only has five episodes to date, it’s all about the quality.

When you think about it, five episodes isn’t much, I’ll totally give you that. Most podcasts need to make at least 6-8 weeks worth of content before they can really chart success. Most advertisers also won’t touch a new show until it’s met that threshold, either. While that may all be fine and well for most new shows, this program breaks with all that. For starters, the show is hosted on Jose’s official channel. This is a platform he’s maintained over the years, always putting out quality content. Just his logo alone, has always been off the charts. If you’re going to put out a quality product, you take the time to make sure to hit the nail on the head when it comes to presentation. We’re talking about a 212 Arnold Classic champion, after all!! Jose is a guy who knows what it takes to win. The color has to be right, the physique needs to be dialed in, the music has to be right, the posing has to be flawless. Do you honestly think he’d throw just anything to the wall and see if it sticks? We’re talking about a living legend, here!

So, yes, this new series only has five episodes, but look at how they kicked things off. The first couple episodes were all about the two hosts testing the waters, talking shop, and even discussing current events. Most bodybuilding programs won’t touch mainstream news. Why? Because they don’t want to say or do anything controversial. You can respect that, insofar as maintaining the status quo, but it’s also not cutting edge. The fact Jose and Nate spoke about the murder of George Floyd, on a bodybuilding show, is inspiring. Whatever position they took, the fact they devoted airtime to addressing it, is powerful. That alone separates them from the pack. I, personally, like unique programs and unique formats. These first episodes were perfect. To have started the series with a guest, would have been a mistake. Those first two episodes were as important for the hosts getting to know each other on air, as it was for the fans appreciating what these guys bring, collectively. You can know someone for 20yrs, but when it comes to doing a program together, on a consistent basis, it’s almost like meeting someone for the first time, when you’re on air. All the talk and planning aside, when that tape rolls, things get real.

When it comes to guests, Jose & Nate couldn’t have picked a better first guest than IFBB Pro Santi Aragon. Santi is as real as they get, having competed in Classic Physique and Bodybuilding. He’s a small business owner, he’s been signed by the big companies (e.g. Muscletech in their heyday), won shows and placed high in huge shows (e.g. Top 6 at The Arnold) and he’s a consistent fan favorite. There’s no bullshit in Jose, Nate, or Santi, so picking him was the perfect choice.

What’s really cool about finding a guest on this level, is that it’s almost like having a guest co-host. The standard interview style consists of the hosts asking questions, the guest answering those questions, and no other real conversation to be had. The standard interviewee doesn’t have much to add beyond answering the question at hand and waiting for the next one. That’s not only static, but it gets boring very quickly. I suppose it works, to some degree, for contest coverage, but even there, it can turn cheesy pretty fast. While Santi answered the questions he was presented with, he gave a lot of examples and even provided the hosts with some tangents they could elect to go on. In a lot of ways, Santi is the John Stockton of interviewees, offering the hosts all sorts of assists – Jose & Nate took those cues, hitting some pretty killer jump shots and slam dunks during Episode 3. (My apologies for the basketball terminology, LOL).

The second guest was the coach behind reigning Mr. Olympia Brandon “The Prodigy” Curry. He’s also the former coach behind The Egyptian Phenom Big Ramy. Abdullah Alotaibi of Oxygen Gym is a guru among gurus. His roster of athletes in Open Bodybuilding and 212 Bodybuilding is jaw-dropping. The fact he’s also working with 4x Men’s Physique Olympia Champion Jeremy Buendia in his Fight For Five comeback says it all. Instead of tapping into rumor mills and/or speculating aimlessly as to Brandon’s prep, if & when Brandon will return to Kuwait, or guessing what kind of package Curry will bring to the 2020 Mr. Olympia, they went straight to the source. This goes back to credibility over clickbait.

Let’s be real here, if Jose Raymond wanted to release sensationally-titled videos he’d prolly get more hits. Instead, he & Nate get the real story, they go straight to the source, and they release factual content. One great question they asked, was whether Abdullah could ever see Oxygen Gym coming to America. Could you imagine?! I bet you want to know the answer, it also deals with Jay Cutler. Unfortunately, I’m not going to tell you. You have to go watch the episode and hopefully subscribe to the channel, as well.

The third guest is the coach behind 2018 Mr. Olympia Shawn “Flexatron” Rhoden, the coach behind 4x Mr. Olympia Jay Cutler, and of course, the coach behind The Boston Mass, himself, the one and only Chris “The Technician” Aceto!! This is another episode that doesn’t pull any punches. They spoke about contest prep, Jose’s own preps, and even addressed the question of competing and genetics. They also talked about some gray area topics, like SARM’s. Most people shy away from topics like that, but when a guest knows who’s interviewing them and trusts who’s interviewing them, then no topic is really off limits. When a high profile guest does an interview with someone just about hits, just out for fame, then they worry that maybe the interview will get chopped up, maybe their words get spliced, or their words are used out of context to make a video go viral. That may sound crazy to you, but it happens a lot more than you think in the fitness industry. This is also why a lot of high profile guests simply don’t do press anymore. The Boston Mass Podcast is setting the standard high and that’s great for bodybuilding.

In conclusion, I can’t tell you how much I dig this new series and how excited I am to watch Episode 6. This is a series which could easily be on Patreon, but they offer for FREE!! I think it’s something the fans should be very grateful for. I also think supplement companies, clothing outlets, and other businesses putting out accessories and services should pay close attention to the hits these episodes get, the number of comments that are posted, and seriously consider advertising with Jose & Nate. The bottom line is simple, if a program gains substantial traction and earns a loyal viewership, then that’s a platform you want to advertise your goods and services on. That’s just some food for thought. If your business supports a program that people love, there’s a very high likelihood that people will reward you with their business. If people associate your pre-workout, your shirts, or your ebooks with this program, chances are they’re going to buy your product and/or services over the sea of others.