Shawn Rhoden Has His Pro Card Revoked By the IFBB 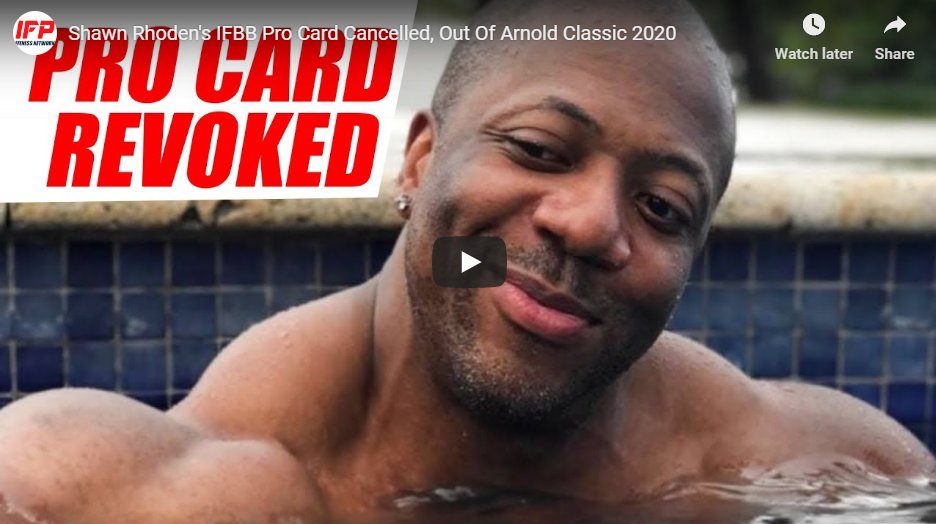 There has been much speculation as to when in 2020 we may see Shawn Rhoden grace a bodybuilding stage. Unfortunately, the news I’m about to share is something I had to reach out for confirmation on as I thought it was incorrect.

I have confirmed that, indeed, Shawn Rhoden has had his IFBB Pro Card revoked. The case stems from his legal matter and the IFBB has said he cannot compete in any IFBB sanctioned show until his legal matter runs its course and a verdict is made. I’m sure there are many thoughts, opinions, and assumptions that will be made as to what this means and why the IFBB would make such a stand without allowing our judicial system to take its course first. However, I’m not going to discuss them in this article.

Shawn Rhoden OUT Indefinitely from Competition

The fact of the matter is, the 2018 Mr. Olympia winner, Shawn Rhoden, will probably not be on an IFBB stage in 2020 unless his court case goes through early enough in the year to allow him to get reinstated and then prep for a show. If I were a betting man and as slow as the courts and the legal process tends to be, I would put my money on us not seeing Shawn Rhoden at all in 2020. But I hope I’m wrong.

I have been watching Rhoden’s social media and I have not seen him make any statements about his pro status/pro card being revoked. I’m sure it’s not something he wants to talk about as I can understand that it’s probably embarrassing that after winning the Olympia, he is in the situation he is currently in.

What’s the Next Move?

It’s clear that the IFBB does not want Shawn on a stage representing the IFBB. So, what does Shawn Rhoden do next? Maybe Shawn doesn’t even know and is trying to figure that out before he announces or breaks the official news straight from the horse’s mouth that his IFBB pro status has been revoked?

Here’s the thing, despite Shawn taking care of his body and looking good for whatever age you think he is, he’s no spring chicken. In fact, Rhoden is 44 years old and for a bodybuilder, one would only imagine that his time on stage may be coming to an end. What does that mean? Well, for starters maybe it means Shawn Rhoden will officially hang up his posing trunks for good and kiss the sport goodbye. I mean, it’s not like he’s going to be on an IFBB stage anytime soon (which is a shame). So, maybe he just retires?

Another avenue for Shawn is to jump into another organization. While this is frowned upon by the IFBB and immediately terminates his IFBB pro status (which he already lost anyway), it would allow him the ability to continue competing. There may be another organization that would love to bring Rhoden on and be the face of the organization – while it may not be the best idea due to his current legal issues, his loyal fans will probably pay to go see him compete. And getting on another stage WOULD provide him with some money as a source of income since he’s lost all potential 2020 earnings from competing in the IFBB as well as many of his sponsors.

Maybe Shawn Rhoden could use his bodybuilding knowledge to help others through personal training? Clearly, after showing he can win the Olympia (among other IFBB Pro shows in his career), he knows what needs to be done to transform a physique, put on quality lean muscle mass, drop body fat, manipulate macronutrients, play with water intake to dry out pre-contest, etc. His knowledge could help other competitors or even the average person who just wants to look amazing but never wants to step on stage to compete.

Where is His State of Mind?

I just want to throw this out there for anyone reading this, especially if you are an athlete or celebrity of some sort. Do not put yourself in a position where someone can say you did something and create a situation like what Shawn Rhoden is in. Never take anyone to your hotel room. You need to be smarter than that. This is, unfortunately, the world we live in and anyone can claim you did something, even if you didn’t. Now, I’m not saying Shawn did or didn’t do anything, all I’m saying is that the entire situation and legal matter could have been completely avoided if he met this individual in the lobby or had others in his room – assuming the allegations are not true. That said, if they are true, I don’t feel bad if the book is thrown at him and I hope it is if he is found guilty.

The interesting thing about this whole ordeal is that there is zero sign of Rhoden backing away from the limelight or going into hiding in any way, shape, or form. He is still extremely active on social media and putting out posts that are motivational and uplifting. Is this a front? Who knows? I’m of the mindset that everyone is innocent until proven guilty in a court of law and I’d like to believe that Shawn Rhoden did not do the things he is accused of doing.

Rhoden prepped for the 2019 Mr. Olympia even after being told he cannot compete. Maybe that’s how confident he is with his legal case that he thought he’d be reinstated and would be able to walk on stage. That didn’t happen but we all saw him up front at the night show where Brandon Curry won and he made some appearances at the expo – even spending some time at the Nick’s Strength and Power booth where in a tank top, Shawn was looking as if he could step on the Olympia stage and walk home with his second Sandow.

Who’s in His Corner?

Personally, I’m in the corner of Shawn Rhoden. I want him to be exonerated from all charges and walk out of that courtroom a free man. The case itself seems to be somewhat hush-hush as I have not heard any updates or details in months. Should anything change with the case, I’ll be sure to write a follow-up article to keep you all in the loop.

With that all being said, down in the comments, let us know what you think Shawn Rhoden will do next. Will he retire from bodybuilding? Work towards getting reinstated? Change organizations? Or maybe you have your own thought about what’s next? Let us know!

Newer Post
Is Marc Lobliner’s Outright Bar the Next HUGE Acquisition?
Older Post
2020 Active Nutrition Consumer Trends Are In: Are They Accurate?