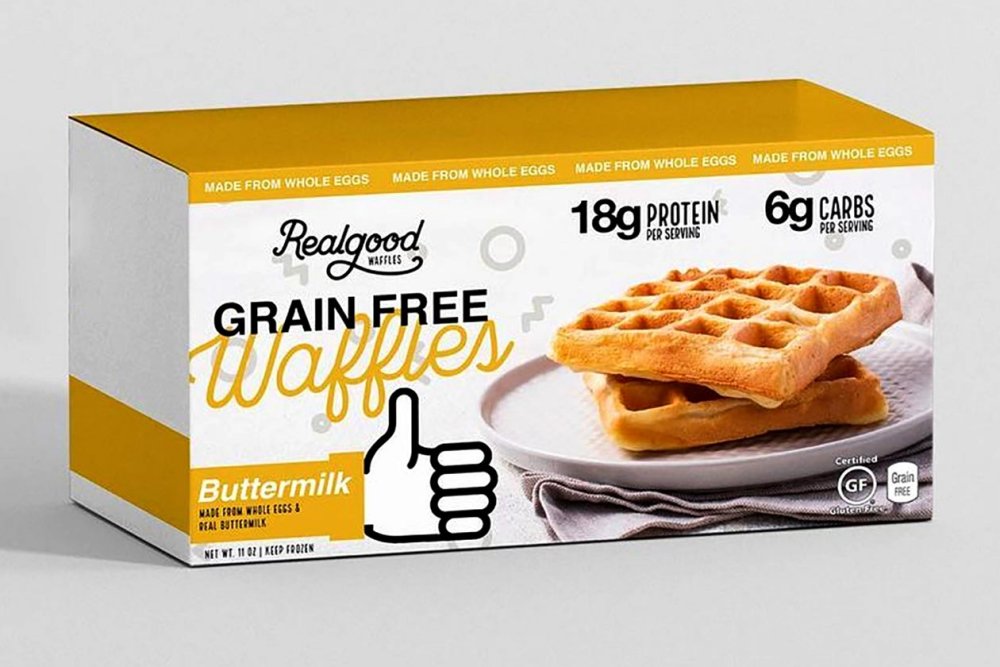 Are you a fan of breakfast foods? Face it, pancakes, waffles, bacon, and maple syrup are simply heavenly. However, if you were to take those foods and put them on a list, many would say they are on the “eat sparingly” list. You’ll put yourself in a carb-coma quickly after having a stack of pancakes and waffles in front of you, smothered in delicious maple syrup (the real stuff, not that fake wanna-be syrup). Wouldn’t it be better if you had yourself some protein waffles instead?

I’m a sucker for functional foods (as you’d already know if you follow my content). And thanks to Real Good Foods, you can stuff your pie-hole with grain-free, protein-packed goodness. Real Good Foods is known for launching healthy alternatives to many of the foods we love and would consider off-limits.

You may be familiar with their pizza, ice cream, dinner bowls, and breakfast sandwiches that you can purchase either online from their website or even at your local grocery store. Now (according to their Instagram account), they are working on some protein waffles.

The full profile of the product has not been released as of the time of writing this article as it’s still being created, but from what I can see on the packaging (which could change), we are looking at protein waffles that are made from whole eggs, real buttermilk, is grain-free, and will provide you with 18g of protein per serving along with 6g of carbs.

I’m not sure if the serving size will be one or two protein waffles, but if I had to guess, I would assume it’s two (9g of protein per waffle, maybe?).

When it comes to the source of protein used in these waffles, it seems like the eggs will be the primary source – which we should all be happy about since eggs are a fantastic source of high-quality protein.

Here’s something that’s confusing me, though. On the packaging I found on their Instagram account, it says clearly on the front of the box, “made from whole eggs.” Reading that, you would assume that actually means the whole egg, right? Meaning both the yolk as well as the egg white. But when you look at their next post on Instagram, which shows the actual ingredients, it only lists egg whites – not the whole egg. Maybe we need some clarification on this as I’m confused why they call out “whole egg” but only utilizing the egg whites.

That being said, here is a list of the ingredients they are showing in the image: egg whites, sunflower flour, coconut flour, vegetable oil, buttermilk powder, allulose, organic stevia, and sea salt. That’s an outstanding ingredient panel, if you ask me! I’d absolutely give these protein waffles a try.

Why Should You Get Excited Over These Waffles?

A better question would be, “why wouldn’t you get excited over these protein waffles?” They’re frickin’ protein waffles! I love functional foods. I’m pretty sure I’ve already said that in this article, but it’s worth mentioning again. Why do I love them so much? There’s a whole host of reasons.

First, any food item that would typically be on the no-no list that has been made to be healthier and includes protein should be a thumbs up in everyone’s book. Most people who are on a diet would skip pancakes or waffles, but with these protein waffles from Real Good Foods, you can easily slide these into one of your meals during the day without regret or guilt.

The next reason why we should get excited about these Real Good Foods Protein Waffles is that they are super easy to make. Now, I wouldn’t say I’m utterly worthless in the kitchen, but I’m far from being skilled. The fact that I can “make” protein waffles without having to make them from scratch is an absolute blessing. Not to mention, you don’t have all of the clean-up you’d normally have by making the batter and then cleaning out the waffle maker (which every time my wife makes them homemade, I ask if we can just toss the waffle maker and buy a new one, so I don’t need to clean it).

With these protein waffles, you can make them in a matter of (what I can only assume would be) a minute, and off you go out the door. This would be perfect for those who are not morning people and normally skip breakfast since they don’t have time to make anything. 18g of protein on the go? Yes, please.

To be honest with you, I couldn’t care less that they are grain-free, but I understand there are many people out there who are doing a song and dance over that. But 18g of protein? Come on now. Most breakfast bars or nutrition bars don’t even have that much protein, and you’re getting it in the form of a buttermilk protein waffle. Add a little calorie-free Walden Farms pancake syrup on top of it and… Sorry, where was I? I started daydreaming. But seriously, doesn’t that sound amazing?

And here could be one of my most significant reasons for wanting these protein waffles (other than for THE GAINZ) – my kids. I don’t know about you, but my kids LOVE carbs. Protein, not so much. I have to try and sneak it in where I can, and this would be a perfect way. My kids wouldn’t even know they were protein waffles, they’d simply eat them thinking they were homemade waffles like my wife makes. If you’re a parent and you’re nodding your head in agreement with what I’m saying, get ready to jump on these when they launch.

Are you excited about these protein waffles? Are they something you would be willing to try? Let us know down in the comments. Personally, I love the idea and hope to find them at my local grocer when they are released.