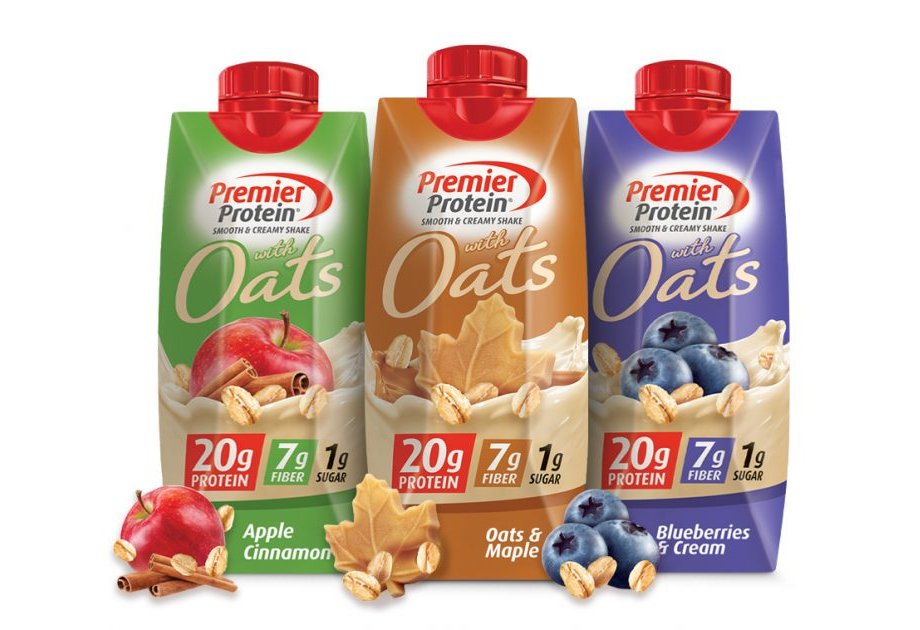 It should come as no surprise that I’m a sucker for RTD protein shakes. It’s not that I’m lazy and can’t make a shake with water, protein powder, and a shaker bottle… Ok, let’s be real – I’m lazy. I think it’s fair to say that many of us prefer “convenience” over a lot of things. Well, I’m no exception. Do I have a bunch of protein powder tubs laying around? Yup. Do I still reach for an RTD protein shake most of the time? You bet I do. And after finding out that Premier Protein with Oats is launching in an RTD you can say I’m a little excited.

Truth be told, this isn’t a big deal. However, from a profile standpoint, I really like the idea behind this new Premier Protein with Oats RTD. How many of you have made a protein shake and either tossed a scoop of oats in your shake for some healthy carbohydrates or ground up your oats and put that in your shakes? I know that used to be a staple of mine. Now, Premier Protein with Oats has taken that very idea and turned it into an RTD version.

Sure, other brands have a powdered version of this concept such as the Optimum Nutrition Whey & Oats, but if you want to be able to have a grab and go option (or you’re lazy like me) this is a perfect solution.

Now, at the time of writing this article, the product is only on pre-order. However, something that separates it from simply adding oats to your shake is the fact that the Premier Protein with Oats RTD claims to be smooth and creamy. This is interesting as you would assume the addition of the oats would either make it thicker or at least have pieces of oats you would need to chew. According to the callouts in their marketing, it doesn’t appear this is the case.

I think Premier Protein with Oats has a decent profile. The RTD is 11oz and contains 150 calories, 3g of fat, 13g of carbohydrates, 1g of sugar, 7g of fiber, and 20g of protein. This is a drink I feel would easily fit into anyone’s macros for the day. Would I like to see more protein (somewhere around 30g)? Indeed. Their other tetra-pak shakes contain 30g of protein so it would have been nice to keep it uniform across the board. But I’d drink this every day of the week if I could (assuming the taste was good).

When you look at the ingredient profile, the first three ingredients are water, milk protein concentrate, and oats. The Premier Protein website claims that each drink contains half a serving of oats (8g). There is also no soy in the product which I think is a good move since there has been a heavy anti-soy movement over the years. Additionally, there are no artificial colors in the beverage, and it is also kosher.

When Would You Use This Shake?

If you were to look at the flavors, I think you can easily understand when Premier Protein was looking to have this product used. The three flavors that are available for pre-order are Apple Cinnamon, Maple, and Blueberries & Cream – there may be more flavors in the works, assuming these three sell upon launch. So, as you would imagine, breakfast is an ideal time to use the Premier Protein with Oats RTD.

Would this replace a whole food breakfast? While it’s not recommended to replace any real food meals with supplements, in a rush this would be a great option versus not eating anything at all. Or, drink a shake along with a real food meal to increase your protein intake while not blowing your other macros out of the water.

I could see some people using this as a post-workout shake or as a “snack” in-between meals. The available flavors are extremely interesting and unique which makes me believe the Premier Protein with Oats RTD shake will be a hit. You’re really not used to seeing those types of flavors in protein shakes and I’d like to get my hands on them once they are released.

One of the benefits displayed on their website that I didn’t think about is drinking the Premier Protein with Oats hot or cold. 99% of the time I’d be willing to bet that consumers are drinking their shakes cold. That’s not to say people aren’t dumping their vanilla (or any flavor really) protein powder into their coffee to be used as a creamer/sweetener. Some even toss a scoop in their cereal to increase the protein content or (like I do) pour a vanilla RTD into the cereal in place of the milk.

What are your thoughts on the Premier Protein with Oats RTD? Will you be trying it once it is officially released? Let us know down in the comments