Newer PostBill Phillips Is Bringing Back EAS: Don’t Call It a Comeback!
Older PostThe Death of Gyms? Over 50% of Gym Members Won’t Return
Share on FacebookShare on TwitterShare on LinkedinShare on Pinterest 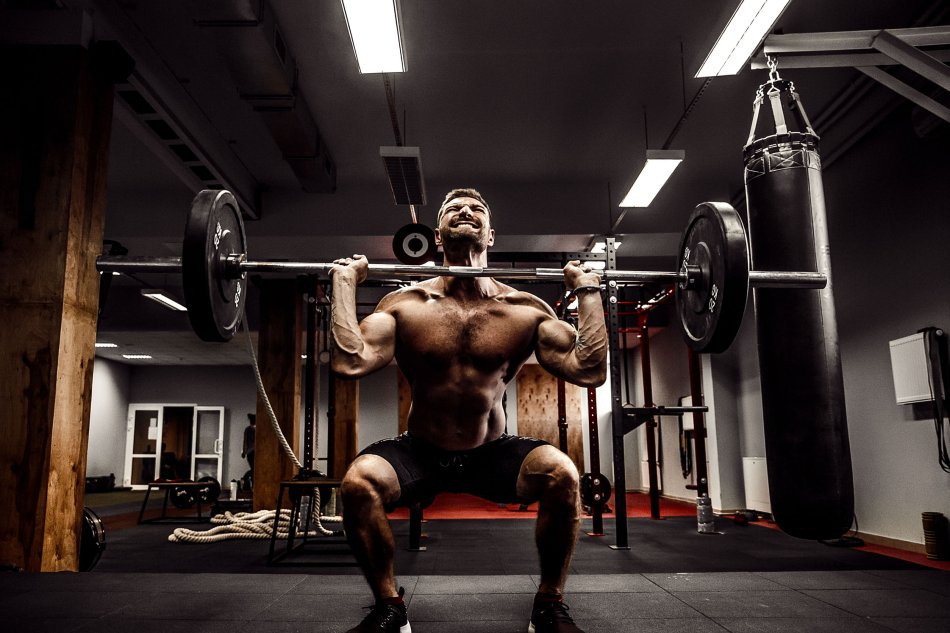 Labels can oftentimes be a little much. Back in the day, you could walk into a record store and look in three or four different sections for a tape or disc, before finally finding it. There wasn’t just a Rock section. There was Alternative, there was Metal, there was Punk, there was Industrial, there were endless genres that the album could be under.

Well in terms of fitness, it’s much easier. There’s physique-based sports, which are judged on subjective criteria – and – there’s strength-based sports which are judged on objective criteria. Further, folks who usually look strong (bodybuilders) really aren’t – and – folks who look out of shape (powerlifters) are. Yes, yes, I know, there’s a bunch of jacked, ripped, and even vascular powerlifters at the international level, but for the most part, powerlifters look like guys who drink beer and eat Grand Slam breakfasts at Denny’s – everyday!! But what happens when you have guys who basically have a foot in each world, guys who are strong as oxs but who look like bodybuilding champions? There have been several of these elite athletes, who actually put up huge numbers, some even at meets, who earned every last bit of media hype they got.

It’s been said that powerbuilding is the fusion of bodybuilding and powerlifting. Many have claimed to coin the phrase and back in the day, MuscleMag International even tried to corner the segment, with their very own magazine called REPS! So what are the basic foundations of powerbuilding, who are the main guys that really could be said to be a part of this hybrid category, and who is the best of the best? Join me as we delve into this very exciting topic, right as America is about to open back up, and hundreds of thousands of gym rats will be back in their iron asylums, training, getting stronger, and hopefully growing. (Don’t forget you can save 15% Off at IronMagLabs.com with discount code IML15).

Powerbuilding, as I understand it, doesn’t really require any particular exercises or even rep ranges, but it does tend to lean more towards the Mike Mentzer approach than say Arnold’s. One of the core tenets is to lift big, with great form, and compete control. Typically, high volume utilizes a lighter weight whereby the challenge is in defying fatigue and lactic acid release, getting through thresholds in order to achieve the maximum pump. Mentzer’s HIT and other nuances like MAX OT (as used by Skip LaCour and Jeff Willet) tend to be more in line. Powerbuilders would also, more than likely, prefer dumbbells and barbells to Smith machines, where pulley might be assisting in the lift. What’s the point of increasing strength, if you’re only doing a fraction of the work? This is not a subset that looks for convenience; if anything, they look for the good kind of pain – not the kind that leads to injuries, rather, the kind that leads to gains.

That being said, there’s 3 staple exercises in powerlifting, that powerbuilders swear by. These are deadlifts, squats, and bench. Also, while bench is definitely one of the Big 3, it’s the least impressive of the group. Powerbuilders are all about squatting and pulling, whether suited or raw, they are all about moving the biggest amounts of weight flawlessly. They’re not the types to scream, high-five, or dance around their workout stations. These guys are the blue collar, tough as nails people in the gym. They let the numbers they move make their case. Sometimes they’ll even incorporate chains, have their spotters ad extra resistance with their bodies, and/or slap each other on the back or take a whiff of ammonia. They take the most hardcore elements from powerlifting and bodybuilding and they create powerbuilding.

In addition to exercises and approaches to lifting, powerbuilding is very much a mindset, as well. The goals are totally different from bodybuilding or even powerlifting. Bodybuilders want to look strong, but symmetry is their top priority. Powerlifters want to be strong and symmetry is the least of their concerns. Powerbuilders aim to hit both worlds. Powerbuilders are the ones who truly aspire for the much-talked-about Mind Muscle Connection. Some compete in bodybuilding contests and/or powerlifting meets, but for most, the competition, if you will, is working out at the gym, it’s eating the meals, and it’s staying focused on maintaining strength gains and growing stronger. When all your efforts are aimed at performing well at an event, once said contest is over, one could surmise that an off-season starts. Powerbuilders don’t train like that; they don’t think like this, either. To them lifting and eating to grow is a natural part of life. It’s like breathing for us. You’d never want to take a break from breathing, would you?

Further, the mindset of a powerbuilder takes a lot from the old school way of doing things. Drawing attention in the gym isn’t only undesired, it’s totally frowned upon. These folks like to let the weight they move, be what’s noteworthy. If anything, they believe the way they lift, is as impressive as how much they lift. You have a lot of people exhibiting sloppy form at the gym (even on training videos), others use momentum, and quite a few yell and shriek, making themselves look like total imbeciles. When a powerbuilder lifts, everything is controlled chaos. The weight is impressive, the form is too, and the degree of control exerted is jaw-dropping. You have sets of perfectly-executed reps, great positives, great negatives – it’s a beautiful watch. That’s what training should be! Even when they go to failure, they do so in a very hardcore, very dignified manner.

Even that word – failure – isn’t something folks who powerbuild ever want to hear, much less utter. Others in the gym don’t have that pride at play. And what’s wrong with being proud of your strength and training? Pride has been demonized by the humble, but there’s nothing wrong with self-love and/or love in what you love doing. A lot of people go to the gym because it’s on their checklist, some are even sluggish, as they would be on a typical Monday morning, back at the job they hate. If you don’t love the gym, why go? The gym is home for people who love to train. For a lot of powerbuilders, even driving to the gym, creates some euphoric effects. You think, I’m kidding? I’m totally not. If we’re talking strength, the mind of a powerbuilder might even surpass their physical strength.

There’s a few guys that totally fit this bill. One guy who immediately comes to mind is Mike O’Hearn. Mike, who starred in the hit series American Gladiator, personifies powerbuilding. He’s a disciplined lifter, who focuses on form, and can be found training regularly, at The Mecca of Bodybuilding, Gold’s Gym Venice Beach, at 4AM, daily. Now, it doesn’t matter what time you train, but seriously, who the hell trains at 4AM? Well, a guy who wants free reign of the gym, someone who’s literally like a kid at the candy shop. The gym is MIke’s home. He’s not getting ready for a bodybuilding contest, a powerlifting meet, and he most certainly isn’t wearing a Monday morning face, either. He’s there because he wants to be there; he’s not checking off things to do for the day, either. The training is the challenge. Whether he’s benching, incline pressing, squatting or pulling, Mike gives 100%. He’s not in shorts and a string tank-top, either. Everyone knows what his physique looks like from the magazines, the web, and all his tv appearances. Guys like O’Hearn kick it old school, showing very little of their physiques and not drawing attention to themselves while they lift. They don’t walk around the gym pointing out flaws in others’ training. If someone walks in and lifts more, they don’t try to outlift them, either. Powerbuilders may love the gym, love to lift, and always think about improving, but these folks are not meatheads.

Another gentleman who totally personifies a powerbuilder would be the Showstopper Ben White. Back in the day, he was putting up some crazy numbers in the gym, while maintaining a very symmetrical, very impressive physique. As an IFBB Pro , he’d battle it out with the best in the world, as skilled judges compared the look, density, and shape of his muscle, coupled with condition and posing. Another example of a top level, pro bodybuilder, who also trained and competed as a powerlifter, would be Johnnie O. Jackson. Both Ben and JOJ were considered to be among the strongest bodybuilders of their day, exhibiting excellent form and gaining strength, progressively, over time. Much like O’Hearn, the magazines loved covering Ben and Johnnie, and in doing so, more copies were sold. This is because your average bodybuilder’s training is very unimpressive, almost boring. This is why bodybuilders are often accused and every so often implicated in the use of fake weights. It’s not that they don’t want to lift heavier, it’s that they can’t. Powerbuilders, as a result, can write their own ticket.

Perhaps the G.O.A.T. is Ronnie Coleman. Here’s a guy who pulled and squatted 800lbs, during contest prep, like it was nobody’s business. He suited up, had Brian Dobson to spot him, and the rest is history. Sometimes, very rarely, was his form a little sloppy, considering how much weight he was moving; however, the vast majority of the time, Ronnie executed reps with utter perfection. His background in football provided him with a great degree of discipline, and allowed him to train his body in a completely different manner than all sports listed here. His background in powerlifting gave him the knowledge on how to lift raw, shirted, and the intricacies of each lift. His foundations in bodybuilding taught him how the muscle responds to training, what grows it, what distorts it, and so on. Sadly for Ronnie, injury was never enough of a detractor. Most guys aren’t going to push it to the point where they’ll get hurt, but others will push till they can’t push no more. Herein again, the mindset can be stronger than a powerbuilder’s physical strength. This is definitely not a situation we’d like to see play out, but one, that in reality, does.

The truth of the matter is that there may be a lot more powerbuilders than you think. I’ve met several guys at gyms all around the country who look like bodybuilders and train like powerlifters, but they don’t compete in either sport. When you ask them if they want to, they say no. When you ask them would they ever do it, many will say, the gym is their contest and the way it makes them feel, that’s their trophy. And to be honest with you, that’s a very honest and very reasonable outlook on life and lifting.