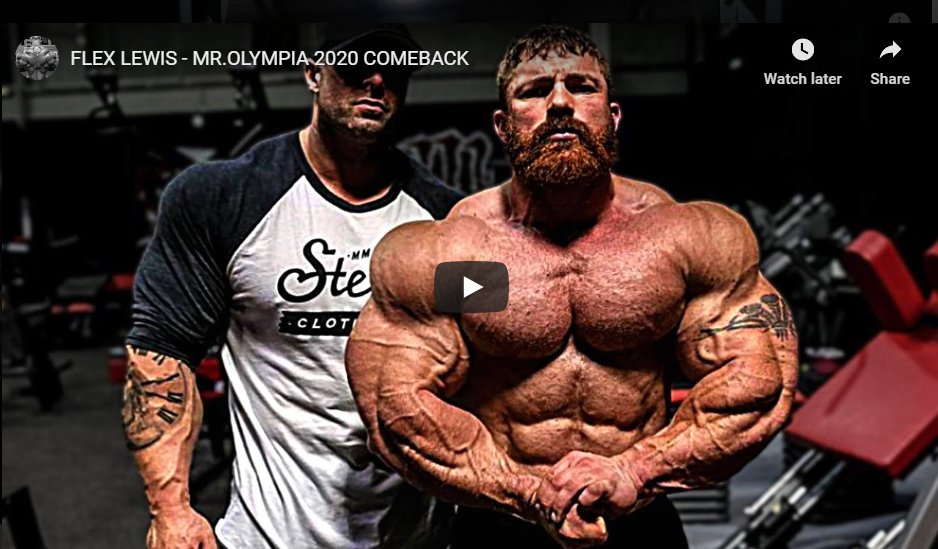 2020 has been one of the most #%$*&@ up years any of us has experienced. If there was a box of bad event dominoes, 2020 would be pushing the first one over and causing the snowball effect we’ve experienced thus far (hopefully we are done for the year). That being said, everything that has been going on has crushed the bodybuilding industry as competitors aren’t able to hit the gym nor are shows allowed to take place due to the inability to have large gatherings.

Many are hopeful that shows are going to start rolling back into full swing, but currently, they are left without a paycheck in their hands and uncertainty as to when their next show will be. That is unless you’re Flex Lewis. If you were to look at Flex Lewis and what’s in his hands, you’d find an Olympia invite.

Why Is No One Talking About Flex Lewis?

It’s interesting to me that fans and media are talking about everyone other than Flex Lewis. Talks of if Kai Greene is going to come back. Mentions of Phil Heath hinting at coming back to win his eighth. Questions of whether or not Shawn Rhoden will be able to grace the stage once again depending on his pending trial. And doubters who think Brandon Curry was a one and done Olympia winner.

Flex Lewis has nothing to prove. He’s a seven-time Mr. Olympia 212 winner and arguably the greatest 212 competitor to ever walk on a bodybuilding stage. With the announcement that he was going to retire from the 212-division and move up to men’s open, many wondered if he would be able to put on enough size to stand next to the likes of Phil Heath, Big Ramy, Roelly Winklaar, and the reigning champion, Brandon Curry.

We’ve never seen a side-by-side comparison of Flex Lewis next to any of those guys. Heck, we haven’t even seen him stand next to guys who didn’t even make it into the top 10. So, the question remains if he has a physique that can crack the top 10 or even make his way into the top five?

Maybe the lack of excitement for Flex has to do with when it comes to the men’s open, we aren’t used to seeing his name. But I will say this… people better be prepared come the 2020 Olympia in Vegas at the end of the year. Flex was given a special invitation very early on which allows him more than enough time to prepare his best physique to date.

Flex WILL Be Ready

I don’t have any insider information nor am I personally friends with Flex Lewis (the guy probably doesn’t even have a clue who I am), but I believe Flex will be ready in December to shock bodybuilding fans across the globe. I think Flex is using his time flying below the radar to put all of his focus into his prep, without all of the distractions. In fact, no one talking about Flex has probably taken a lot of the stress and pressure off of him and therefore he can have fun with his training and simply put his head down and get to work without people breathing down his neck and wanting to see what he looks like throughout the year.

Even during the lock down and stay-at-home order, Flex has the ability to train at his gym (Dragon’s Lair Gym in Boca Raton, FL). He owns and operates it and just because others aren’t able to train there during the lockdown doesn’t mean he can’t – and I think he’s been if I were a betting man.

I’m sure he hasn’t been missing his meals or supplements and is somewhat still on cruise control during his prep. Being that most things are closed, I’d bet he’s getting some good rest and recovery which can only help improve his physique as well.

One thing I’ve taken notice of is that Flex Lewis has not been very active on social media when it comes to his workouts or showing off his progress. In my opinion, this is smart. I also believe this is at the direction of the Olympia promoters as they do not want anyone to see what Flex looks like until he walks out onto the Olympia stage.

It’s been quite some time since we last saw Flex Lewis on a bodybuilding stage. One thing that concerns me is that due to the fact that he needs to put on a ton of size to get ready for men’s open, while he knew his body well when in 212, will he be able to nail his conditioning after taking so much time off and not knowing how his body will respond to the new size he has added. I can only assume that he will start his diet a few weeks earlier than normal to give him enough time to make the necessary changes should things not go as planned leading up to the show.

But being that Flex Lewis is lying low and not in the spotlight should have Flex smiling – it makes him the forgotten competitor. THE UNDERDOG. Personally, I’m not ruling out that Flex could land within the top five at the 2020 Mr. Olympia competition. I actually think it would be pretty cool to see him come back and win the whole thing.

With that being said, I need to slow my roll. We still don’t know who all will be stepping on that stage in December. Right now, Brandon Curry is looking pretty dang good. We haven’t seen some of the other guys like William Bonac, Dexter Jackson, Hadi Choopan, Big Ramy, or Roelly Winklaar. And how can we forget about the lack of commitment from Phil Heath and Kai Greene?

If you were to add Phil back into the fold, I think it’s game over. I think Phil will win his eighth Olympia title. Should Phil come back and not regain his title, I think his competitive career is over and he’ll retire.

That said, how many years will Flex Lewis compete in men’s open? Who knows? But I, for one, can’t wait to see the package he brings to the stage at this year’s Mr. Olympia.