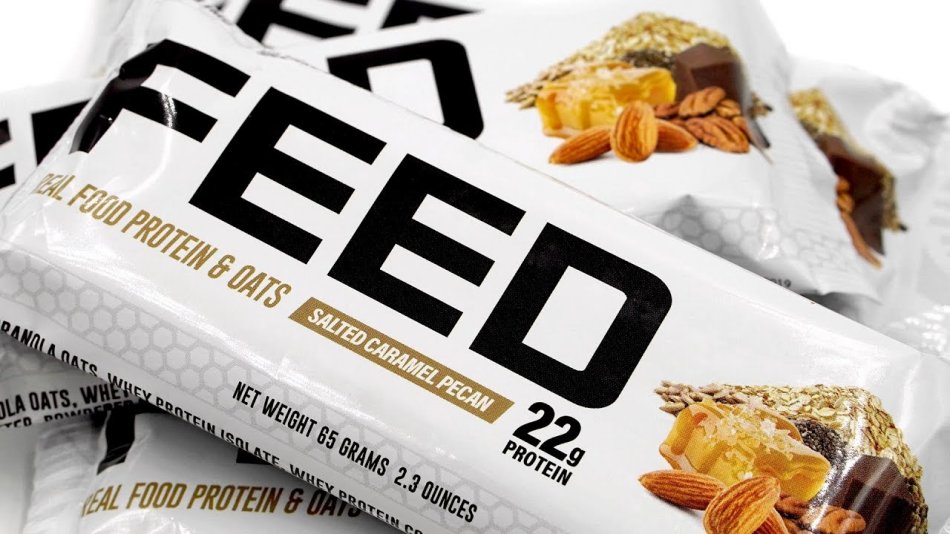 While not one of the most commonly talked about brands in the US, Nutrabolics has been around since 2002 and back then had an extremely heavy presence on Bodybuilding.com. In fact, Rodney Dupont (co-owner of Nutrabolics) used to frequent the Bodybuilding.com forums quite often back then. That’s when the forums were fun, unlike today where 99% of the people on forums are there to troll or take things off-topic.

This large Canadian brand has a wide variety of products, two of which caught my attention. One is an RTD beverage called Nocturnal which is a natural hemp-infused energy drink that provides both energy and nootropic properties and then the other product is a real food protein bar. The downside to the Nocturnal RTD is that it won’t start shipping until early 2021. *womp womp*

So, since we can’t really say much about Nocturnal due to us having to wait quite some time yet until it’s released, let’s talk about their Nutrabolics Feed Bar as well as their next 2.0 bar launch.

In case you’ve been out of the game or are simply living under a rock, The Outright Bar is leading the race when it comes to real food protein bars on the market. Marc Lobliner created the bar for his family and liked it so much that he decided to make it available to everyone. Since then, he’s come up with a laundry list of flavors and bar varieties to suit the needs of many individuals with specific dietary needs.

Then came the RYSE bar which is extremely similar to The Outright Bar. Now, Rodney and Jayson (the other co-owner) over at Nutrabolics are tossing their hat in the ring to see if they can shake things up a bit with their Feed Bar.

Like others in the market currently, the Nutrabolics Feed Bar is made from 100% real food ingredients and is available in Peanut Butter Chocolate as well as Salted Caramel Pecan.

Nutrabolics claims on their website that “Every Feed Bar is packed with a simple set of nutritious, whole-food ingredients like oats, whey protein, peanut butter, almonds, pecans, peanuts, sunflower seeds, almond butter, honey, flax seed, and chia. No fillers, fake ingredients, or artificial additives of any kind. Just a healthy and convenient meal with the goodness of grocery store ingredients and a taste that is unmatched – even compared to many delicious cheat foods!”

When comparing the Nutrabolics Feed Bar to something like The Outright Bar, the Feed Bar definitely has more ingredients. I’m not saying that’s a bad thing, as some of those ingredients are the addition of more seeds. An edge that Nutrabolics has over The Outright Bar is more protein per bar while containing less sugar. I’m not saying the difference is drastic, it’s simply something that should be noted.

The breakdown of the Feed Bar is as follows (according to the Peanut Butter Chocolate flavor): 298 calories, 10g of fat, 30g of carbohydrates, 3g of fiber, 14g of sugar, and 22g of protein. The protein sources used in the bar are whey protein isolate and whey protein concentrate. Some of the other ingredients include granola oats, honey, peanut butter, powdered peanut butter, chocolate chips, peanuts, sunflower seeds, crushed flax seed, chia, and hemp seed.

When you bite into or break open the Feed Bar from Nutrabolics, it’s apparent that they use rolled oats in the formula as you can clearly see them throughout the bar. I will say this, if you want these bars, you better grab yourself some when you see them in stock as they do not last long on the Nutrabolics website nor retailers’ shelves.

And if you were excited about the Nutrabolics Feed Bar, wait until you see their next creation in the bar category.

Nutrabolics didn’t stop at just one type of protein bar. Based on the instant success of the Feed Bar, they launched what I’m calling a 2.0 bar which is a soft-baked version of their Feed Bar. This new bar won’t be released until at least August 2020 (estimated ship date).

The soft-baked bar is looking like at launch you will be able to pick it up in three different flavors – banana nut, chocolate chip cookie, and peanut butter fudge. Truth be told, those flavors sound better than their original Nutrabolics Feed Bar.

Here is what surprised me the most when I saw their soft-baked version… there are fewer ingredients than the original. If you look at the Peanut Butter Fudge bar (the most similar to the Peanut Butter Chocolate original Feed Bar, the profile is as follows: 240 calories, 10g of fat, 25g of carbohydrates, 2g of fiber, 11g of sugar, and 20g of protein. The only ingredients you’ll find in this bar are peanuts, whey protein isolate, honey, allulose, oat flour, roasted almond butter creamy, natural vanilla flavoring.

I can’t wait to get my hands on the new Nutrabolics bars and see how they compare to The Outright Bar. I’m especially excited to try the banana nut soft-baked as I’m a sucker for anything banana nut. Do the Nutrabolics bars sound like something you’d eat? Let us know down in the comments.