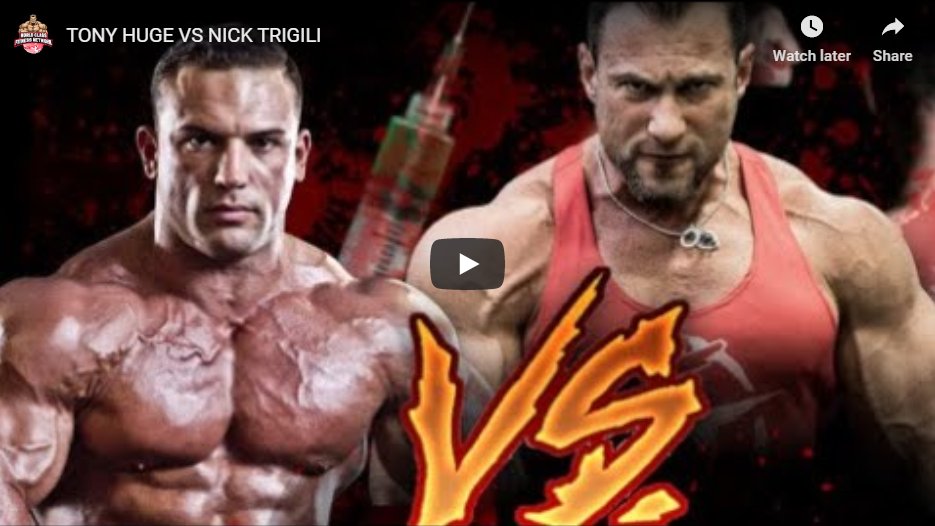 Tony Huge (or Dr. Tony Huge, if you will) has become one of the most popular names in the fitness industry. Although he’s clueless as far as who I am, I do like to show him love on IG and articles like these because I think it’s important to celebrate the big names in our sport. By celebrating him, that doesn’t mean I’m not critical of him at times, but you can’t deny he’s a well-liked, very intelligent, and highly driven individual.

His new movie Enhanced 2 the Max, via Generation Iron, is making amazing business, pushing the envelope, and earning more and more fans the world over. He recently did a great interview/discussion with our mutual friend Jerry Ward, which was very good, and he’s appeared on various websites, even some that only arguably help him. Our mutual friend Rob Dimaggio describes Tony best; he’s a really nice guy who will do anything he can for you. While I don’t know him, personally, I’m a pretty good judge of character and agree. I don’t think Tony’s genuineness on camera is an act; I think he’s the real deal. That being said, he says and does a lot of insane things and very few people in the industry would want to sign on to grill him. This is why IFBB Pro Nick Trigili stepped up and why I think he did a fantastic job.

Bodybuilding fans want real stars, they don’t want to be inundated with mass marketing and gimmicks, and they absolutely hate being lied to. Why was Rich Piana so big? He was larger than life for a variety of reasons, but one reason in particular, was the fact he wasn’t a fake. Some people change as soon as the camera turns off. Others, literally need a few seconds, before the camera starts, just to “get in character.” As a fan, that’s highly insulting. Imagine you’re some teenager somewhere, eating your meals, watching all the interviews, wanting to go take a selfie with your favorite bodybuilder and you come to find out it’s all lies, all bullshit, all a trick – and guess what – YOU fell for it! A guy like Tony, despite his crazy antics, is a throwback to real, no bullshit bodybuilding.

Nick Trigili is a Top 5, pro bodybuilder. He gave 110% and achieved huge things at a very young age. He’s successfully prepped countless people for the stage, signed the big supplement contracts, been all over social media and is now landing some of the biggest interviews. Unlike some of his more popular contemporaries, from the very young like Nick’s Strength and Power to the aged like Dave Palumbo, Nick doesn’t do cookie-cutter interviews, with softball questions, and blatant bootlicking. That’s simply not his style. He’s doing this because he’s searching for truth and because he wants to push the envelope. Tony wants to push it with shock value, while Nick wants to push it with journalism. They’re both on top of their games.

So what about this interview? The interview was gold. It’s being released in sections, which is possibly a sign of the times. I, personally, would have preferred it released all at once so people could see it from beginning to end, but it might make more sense to release it in pieces. Most people are going to accuse Nick of making as much revenue as possible and promoting himself as much as possible. That could very well be the case; however, don’t forget, Tony is also getting a lot of that promo, as is his new film. So long as the host and guest are happy, that’s very important, but there’s more to it as well. I really think the decision to release a long video in segments makes sense, because most people aren’t hardcore anymore. They won’t watch or listen to anything, even something groundbreaking, for more than 10 or 15 minutes. There’s so much great information in this interview, so it makes sense that everything gets its equal amount of attention – nothing should get buried or overlooked.

So was Nick hostile? Was Tony defensive? Are these guys now feuding? NO, NO, and NO again. The key to a great interview, is solid questions and candid responses. That’s why all these shows that pin hosts and guests against each other are so lame. If anger is the only angle a media outlet has to promote content, then chances are, the content is crap. This interview was great because absolutely nothing was off-limits and the few times Tony’s alarm or phone interrupted, he was sure to offer a quick but sincere apology. It’s the little things that also contribute to a fantastic overall experience. Both these guys love bodybuilding, they live the lifestyle, and they interacted on a very real level.

Always remember, that’s the key to being successful in the fitness industry – being real.

With regard to what was discussed? Everything. They talked about protocols, they talked about the 20lbs of muscle in 30 days, they talked about Craig Golias and more. Nick also asked a solid question pertaining to the image of Tony that’s portrayed. Is Tony’s image all his own – or – is it the product of marketing by Generation Iron? I thought that was a very good question, which elicited a two-part response from Tony. Some people view multi-part replies as lawyerly, dodgy, and/or evasive, but I disagree. I think anytime someone really thinks about how to answer a question, even if they need to break it down into parts, it just shows that they take the interview seriously and that they want to be as thorough and accurate as possible. That’s a good thing!

With that being said, I highly recommend this interview. I encourage you to watch all parts, subscribe to both channels, and leave comments. Is Tony Huge the next Rich Piana? No. No one is the next Rich Piana. He will never be replaced. Is Tony Huge going to become even more popular, go viral, and/or potentially do more in the industry? I’d bank on it.