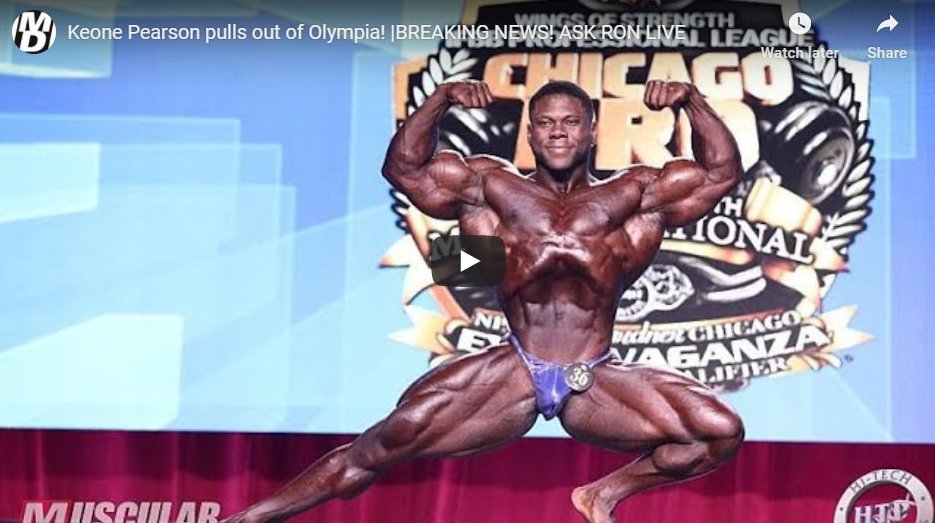 I first met Keone Pearson aka The Prodigy at my friend PJ Braun’s Braun Army meetup at Flex Appeal Gym in Miami, FL. PJ had been pushing Keone hard, coaching him, looking after him and advising him on how to go all the way to the top. Although Pearson was initially under the wing of bodybuilding Hall of Famer Flex Wheeler, he’d gone as far as he could with him.

The Sultan of Symmetry had coached the aspiring, then, Classic Physique competitor along natural protocols, helping him build an impressive physique and taught him a great deal about sound training, posing, and the ways of being a pro. Everyone was blown away by how much genetic potential Pearson had and very few people could believe he was natty.

There’s countless Youtubers whose entire channels are dedicated to blasting fake natties. These losers had a field day with Pearson. They’d make video after video, all but asserting, that the natty classification was bunk. There was no way someone so young could build that kind of muscle, on that kind of frame, and then retain so much size after a prep. They just couldn’t wrap their little minds around Keone’s God-given genetics.

As Keone got more and more clout and the haters started sounding off more, he’d long been on PJ’s radar and was ultimately offered a contract. Now most company moguls would have only made an offer for the young, aspiring star; however, Braun wasn’t about that. PJ had been a huge fan of Wheeler’s and not only respected his work with Pearson, but he didn’t want to come between the two, at all.

The idea was for both – Flex and Keone – to join Blackstone and continue doing the great work they had. The sponsorship only added to the talk of the town, opening many more doors than ever before. Braun wanted to see Keone compete at The Arnold, the New York Pro, and other big league shows. At some point, though, the question of Pearson’s natural approach did arise. Anyone who thinks that being 100% natty doesn’t hold back an athlete from going all the way in physique-based sports is either very idealistic or very stupid. Keone was placing Top 5 in the biggest contests and the only thing keeping him from winning, was a tiny bit more size and a little bit more condition. He was a genetic powerhouse who could go all the way. As Wheeler became more and more absent, Braun started making up for it.

PJ got started in this business, before anything else, as a competitor and coach. He knows how to prep people for contests. Love him or hate him, the guy knows how to dial people in. That being said, if he had his druthers, Flex Wheeler would have always been in Keone’s corner. When that fairytale started to fall apart, PJ couldn’t walk away from his star athlete.

At the end of the day, Blackstone is a business, and when a business invests in a person or a project, failure is simply not an option. When Wheeler, largely, disappeared, PJ sprang to action. Keone got on the good creatine, he now had Braun as his coach, and the rest is history. He stayed at Braun’s house, he had full access to advice, and in many ways, he became the most important athlete on the Blackstone roster.

A lot of athletes who’d been with the brand longer, who’d proven their loyalty, and stood for ages with the company, gave way to this new superstar. Pearson’s physique warranted it and with Braun’s almost unconditional support – he’d hit the jackpot. When Pearson moved up from Classic to 212, he was looking at a full year of checks. He wasn’t expected to compete, just train, eat, and grow. The idea was to take the division by storm in 2021!! The Prodigy was also looking at getting a full-time job (with benefits) at BSL in addition to his sponsorship and the whole Blackstone machine was at work for him, as he made improvements. What other athlete had it this good? In Blackstone or anywhere?

Keone is a nice kid. I thought he was genuine and I thought he had good values. I still think he’s a nice guy, but I think he made some poor decisions with his break from BSL. The bottom line is, he’s always had someone by his side, whether Wheeler and/or Braun. Flex showed him love and PJ showed him even more. When Keone went to HD Muscle, I don’t think he found that level of support. Sure, they wanted to sign him, as he’d just basically spat on PJ’s face and cut ties with a company that was his family, but I don’t think they loved him. Love is a very powerful emotion. There’s hardly any loyalty in the fitness industry, much less love.

The whole reason for the break with PJ was over Black Lives Matter, comments Braun made on a cardio live, and the heavy pressure exerted – of course, behind the scenes – on him by some big names in bodybuilding. These big names basically bamboozled Pearson into publicly and nastily breaking ties with a guy who thought of him as a son. Keone didn’t give notice, wasn’t gracious; he basically ditched a whole crew, a whole brand, over a difference of opinion.

I marched for BLM in Louisville, KY, Columbus, OH, and Ft. Lauderdale, FL. To date, I don’t know that Keone marched or held a sign anywhere. That’s not to say he didn’t believe in the movement. I’m just saying that he wasn’t actively pushing the message like I was and many others. If he did feel strongly, it certainly wasn’t publicly known. What was publicly known was what PJ said and the backlash from some key bodybuilders. These big-name bodybuilders called up several people on the BSL Team. Keone was one of them. There were others; some who’d been in the family for a very long time. When a top bodybuilder calls a young pro, they have a great deal of sway. Keone wasn’t the only BSL to leave over this pressure. The problem is, these other athletes had back-up plans, Keone did not. And what about the superstars who pushed him – and others – to leave? Once these athletes screwed themselves, these big talkers didn’t have any career advice, they didn’t line them up with anything.

Fast-forward to Brandon Curry’s Carbon Culture grand opening in Murfreesboro, TN. I was there, doing coverage for StrengthAddicts (backed by BPI Sports). Keone was slated to be there with HD Muscle. I was curious what it’d be like running into him. The only thing is, he was a no show. The explanation I was given, is that he was prepping for a show. So what, I thought. Tons of people prep for shows and they honor their commitments. There was also a huge mystery around what show, exactly, Keone was doing. Remember, the plan with PJ for 2020 was no shows and To grow into the 212. Maybe another company wasn’t going to pay him full salary to build over time. That I don’t know; I’m only speculating. BSL was all about the long-term investment in Keone’s career, but maybe HD Muscle wanted a quicker return. Whatever the case may be, Keone competed in Chicago, with soft glutes, and still won. Did he want to do Chicago? Well of course he did, right? I mean if he didn’t, he wouldn’t have competed, right?

Well, in a video released on Thursday, The Prodigy announced he was withdrawing from The Olympia. He spoke of wanting to compete for himself and he implied that that wasn’t the case for Chicago. It seems he didn’t want to compete in his hometown and he may have regretted it – even though he won. He spoke about getting right with God and quite frankly, seemed very unhappy and lost. Soon thereafter, I posted a video with my thoughts that made the rounds. I tagged Keone, but he didn’t comment or contact me about it. His whole demeanor is that of a broken, lost soul.

I for one, hope he can make amends with Braun, try to put his career back on track, and hopefully carry on from where he left off in 2020. This is a guy who at 100% can be a 212 Olympia Showdown Champion. At the rate he’s going, without a solid guy like Braun or even Wheeler in his corner, I could totally see Keone disappearing from the sport. I don’t want to say that he needs someone to hold his hand, but, if the shoe fits…

What’s your take on the state of Keone’s career, his decision to drop out of the Olympia, and his future in bodybuilding?