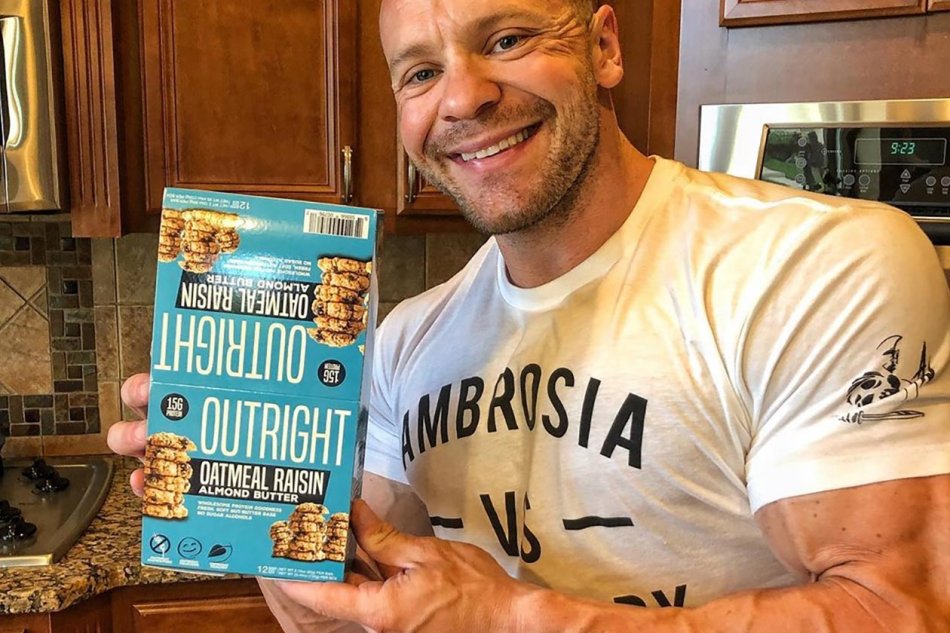 In the past, I’ve talked about the Outight Bar and all the noise it’s making in the industry. And I’m not talking about just here in the United States, I’m talking GLOBALLY. And the success of the brand has been put on the back of Marc Lobliner, himself, and I’m honestly left scratching my head as to how he’s doing this by himself.

Generally speaking, the growth we have seen with the Outright Bar is more times than not, done with a team that includes C-suite executives working with managers who control both sales and marketing teams. When you look at the Outright Bar and its office, one man is sitting in the room – and that’s Marc Lobliner. And this room (office), just so happens to also have a bed in it. And yes, he sleeps in his office when he travels to headquarters. How many owners/CEOs are doing that to win?

Many refer to him as “The Machine” from many years ago, but in all honesty, he very well may not be human. The guy is the CEO of Outright Foods (Outright Bar), CEO of MTS Nutrition, and CMO of TigerFitness.com. He puts more miles on his vehicle in a month than I do in over a year. And his hard work and hustle have paid off with the success of the Outright Bar.

The Product Speaks for (and Sells) Itself

I’m sure some people do not care for the Outright Bar – and that’s fine. But the fact that it has grown so large without a huge financial backing says something about the product itself. Now look, there’s nothing complicated about the product. That may seem harsh but it’s the truth. It’s a whole food protein bar that does not contain a bunch of junk, yet still tastes amazing for having such a short ingredient list. But it’s how Marc created it that makes it so special and unique.

I have zero affiliation with Outright Bar but I’m going to go on record saying it is hands down my favorite protein bar on the market – without a doubt, no BS.

While I wouldn’t say Marc is sitting at his office rubbing two nickels together, he hasn’t needed to drop the type of coin brands like Quest Nutrition has had to in order to grow their brand. And look what happened to Quest Nutrition last year – they were acquired by the Simply Good Foods Company for $1B. Yes, that’s a “B” for BILLION, not an “M” used. Crazy, right?

In my opinion, that bars are priced reasonably as well. Most protein bars fall between the $2 and $3 range, which the Outright Bar does. The profile of the bars have you hitting around 15g of protein, 26g of REAL carbohydrates (not filler junk), and 12g of healthy fat. The bars are soft and flavorful – and more importantly, there’s an Outright Bar out there for everyone.

The Outright Bar can be purchased as a peanut butter-based or almond butter-based bar, and for those vegan’s out there, there’s even a plant-based version for you.

That’s a great question. While I highly doubt at this stage Marc is looking to sell, I’m sure if the right number was thrown out there he might need to sit down and evaluate if he wants to exit or see where he can continue taking the business.

And don’t think that just because Marc Lobliner and I have a history together in the industry and are friends, that I’m here tooting his horn. (That whole sentence just sounded wrong). But all jokes aside, if you follow what Marc is doing with the Outright Bar, it’s mind-blowing.

Stack3d awarded Outright Bar with the Functional Brand of the Year – beating out some stiff competition. Industry consultant, Josh Schall, named Outright Bar as his #3 biggest sports nutrition brand winner from 2019. Every couple of months it seems that Marc is launching a new Outright Bar, whether it be flavor or type.

While Marc is out there selling the Outright Bar himself, he has teamed up with Europa Sports and Muscle Foods USA to gain national distribution of his bars. That being said, Marc, himself, has also gotten the Outright Bar in places such as The Vitamin Shoppe, HyVee Grocery, Lipari Foods, Giant Eagle Grocery, Kwik Trip, D&B Grocery, ACE Hardware, Popeye’s in Canada, everywhere online, into mom and pop supplement stores, and as mentioned earlier, retailers across the globe (as well as distributors like Prometeus who sell throughout Europe).

Honestly, I think it’s just a matter of time before a major player reaches out to Marc and throws out a big number to acquire Outright Bar. Marc is doing things that I’ve only ever seen done by TEAMS who make up a brand and the people who make up that team all have their niche such as specialty, FDM, convenience, etc. Marc, he just rolls up his sleeves and gets to work. He didn’t start Outright Bar with every connection in the world. He picked up the phone and got the meetings. Then he went himself to sit down with these major companies to close the deal. You can’t help but salute the hustle.

All in all, when I look into my crystal ball, I see Marc selling Outright Bar for a huge sum of money in the next five years. Maybe I’m wrong and he’ll continue down his path? But at the end of the day, you need to get in and out while the iron is still hot. Hold on too long and the evaluation could go down. But right now, Marc is building something bigger than I think even he imagined.