Newer PostThe Return of Phil Heath
Older PostIf Spectators Are Not Allowed at the Olympia, Will Competitors Sit Out?
Share on FacebookShare on TwitterShare on LinkedinShare on Pinterest 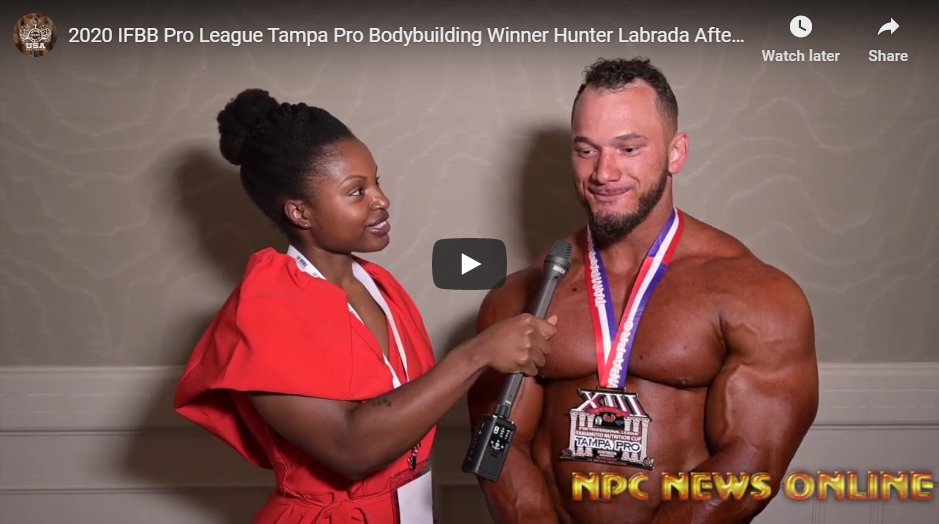 The news spread like wildfire as bodybuilding legacy Hunter Labrada won his pro debut at Tim Gardner’s IFBB Pro League Tampa Pro. Just about a month ago, I wrote an article calling Hunter ‘Future Greatness’ for Iron Magazine. In that article, I predicted that Hunter could quite possibly win this contest, despite the fact he was up against fierce competition. The reason for this is because he’s given 110% on this prep. I first met him, and interviewed, Hunter at the 2018 NPC National Championships in Miami, FL.

At that contest, he dominated the pack, with great muscle, an attention to detail in his posing, and the stage confidence of which I often speak of. Taking from his Hall of Fame father, Hunter is very much the posterboy for legacy competitors. His father, Lee Labrada, made a name for himself in the 1980’s as being one of the most dangerous competitors in the sport. Despite the fact that Lee faced giants, most notably 8x Mr. Olympia Lee Haney, he always delivered with amazing condition, fantastic lines, and posing. Hunter has taken many of these attributes from his father, signing with Labrada Nutrition, perfecting his posing, and taking all the critiques his father gives. The fact is, Hunter’s dad has taught him well, but a great portion of his success in Miami and now, in Tampa, has been his own drive and discipline. The fact is, he totally reinvented his physique from winning pro status to winning his pro debut. Much like I said a month ago, there wouldn’t be much time to savor the victory, as the marketing machine would spring into action – and it has! What’s next, what will Hunter do, what will he say? The future is bright, but he’ll be very, very busy – that’s for sure!!

As soon as the weekend kicked off, it seems everyone was looking for Hunter. When he wasn’t around for registration, like all the other competitors, people started wondering why? I got several messages as a result, but i had the same answer for all. The more time Hunter could stay under wraps and out of the limelight, the better.

There’s always time for press and most definitely for the fans, but I’ve always thought it’s best to hunker down until the battle begins. The bottom line is, the photos painted a very good picture and really helped to seal the predictions. In the weeks leading up to the show, the shots just didn’t lie. The photos showed a consistent evolution and a great way to back up the talk, is that shadows weren’t employed, these shots weren’t full of filters, and nothing was hidden. Some competitors, namely those looking to be Instafamous, pull all sorts of tricks when posting content. Hunter didn’t do any of that. His training footage was also pretty much off the charts. Most guys scale down on the training, tighten up their diets, and really hit the supps hard in the days leading up to to peak weak. For Labrada, however, the training never skipped a beat and there was no need to hit anything too hard at the end. Those who wait until the last 10 days or the week prior to go nuts, have clearly not done their homework.

It was clear from the prejudging that Hunter had this contest in the bag. He hit all the poses perfectly, he held his peak in between poses, and his transitions were flawless. Usually this level of perfection comes with time, many contests and many preps, but this isn’t your average competitor, he’s the child of a bodybuilding legend, a living legend. He’s been watching posing his whole life so it’s safe to say he can appreciate the gifted masters from the wannabes and posers. Posing helped him considerably at the Nationals and it may have gotten him over the hunch of a very competitive runner-up in Iain Valliere. The showdown between the United States and Canada was a great one; who knows if down the road, we don’t see these two greats battle it out again. In addition to that, everyone is already talking about the Mr. Olympia, which Hunter is now qualified for. Nick Miller thinks Hunter could make Top 10, which is a pretty wimpy prediction, if you ask me. Hunter could do way better than merely cracking the Top 10. Much like Tampa, if he brings his best, if his color is just right, and his condition is perfect, there’s no reason the young rookie couldn’t break into the Top 6. Once in the Top 6, it’s anyone’s battle for the win.

In addition to the Olympia, many bodybuilding fans would like to see Hunter vs Sergio Jr; in fact, there may be more fans eager to see the junior Labrada battle against the junior Oliva – both of which, interestingly, have Cuban roots, than he even the Olympia! Another legacy, who may one day to compete is Joseph Baena, who’s expressed an interest in bodybuilding, but has not competed as of yet. The marketing potential is simply fantastic, from magazines to dvds and all sorts of downloadable features.

Both Hunter and Sergio are freaks, both can totally reinvent their physiques in relatively short amounts of time, both love to entertain the audience and both would be 110% about going the distance. As legacies, some might be of the opinion that doors automatically opened for them, but I’m here to tell you that very few guys outwork legacies. While it is true that their last names do help them, they are also constantly being compared to their superstar fathers, and they must work twice as hard as everyone else. They must excel and outwork their competition, just to be considered to be champions in their own right. Every single interview they do, every single write-up about them (case in point), and even anytime their names come up just in conversation, it’s almost a given so, too, will their parents. Right now, though, both Hunter and Sergio Jr. have proven they are the future, they are the legitimate next chapters of greatness.

The media is about to lose control! This win, at this contest, is huge!! The whole year, everyone has been looking to Tampa; some sites tried to throw shade and raise doubts it wouldn’t even happen, but it did and Hunter won it all!! And it wasn’t even a close win (if we’re being 100% honest). The close ones are always very marketable, but no one is complaining about how the judges scored it. Ian and Dwayne looked great from the front, both guys looked great from the sides, but in the end, contests are won from the back and neither of these guys could stand up to Hunter’s dominance in that department or the amount of muscle he carries. Still, it wasn’t a massacre, so it made for an interesting bodybuilding contest and it will certainly continue to build Hunter’s resume.

What do you think of Labrada’s big win? Do you see him doing any more contests before the Olympia or putting his all into Las Vegas this December? Also, where do you see him placing at the big dance?