Newer PostArnold Schwarzenegger Fourth of July 2020
Older PostWhat’s with All of the Alcohol Flavored Supplements Lately?
Share on FacebookShare on TwitterShare on LinkedinShare on Pinterest 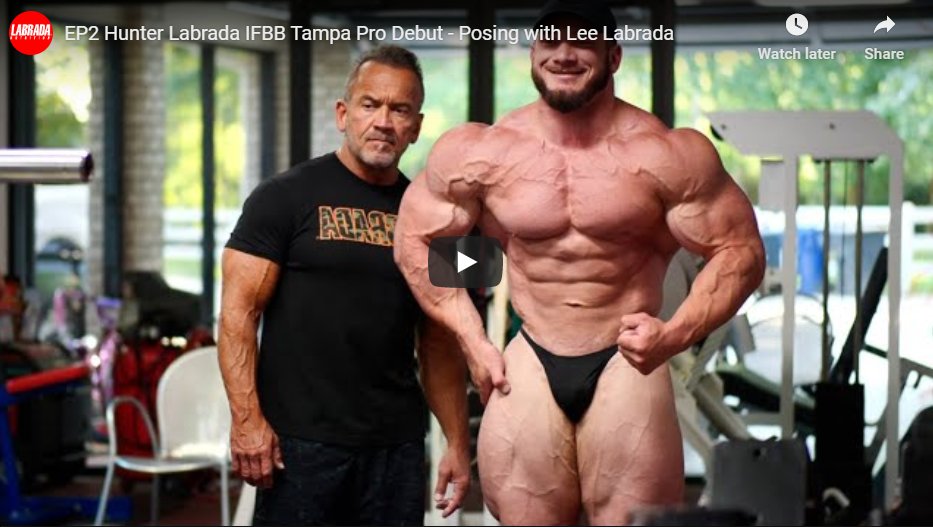 The world of bodybuilding and fitness has come alive ever since Hunter Labrada started upon his bodybuilding journey. It became clear, very early on, that this wasn’t a fad for the youngster – he was poised to follow in his father’s footsteps. Lee Labrada has inspired generations with his structurally-perfect, symmetrical, and flawless physique. He always said that posing is art, and now that sentiment resonates with everyone from top athletes to coaches all around the world.

It’s one thing to have the best physique on stage, but it’s quite another to successfully present it for the judges. In addition to presenting it to the judges, Lee’s posing had a real entertainment value, which worked great for both the media and the fans. A lot of top guys today simply go through the motions, but they don’t really entertain anyone. The fans really miss the times when bodybuilding made audiences come alive

Hunter Labrada has had the best role model to learn from over the course of his life. Like other legacies (e.g. Sergio Oliva Jr.), Hunter has his work cut out for him. While many believe his last name will automatically open doors for him and while he works with his father’s supplement company, the reality is completely different than what meets the eye. Legacies have it harder than just about anyone because fans will always associate them with their legendary parents. Take this article for example, I couldn’t help but write two sentences about Lee in the first paragraph of an article about Hunter. While the young Labrada follows his father’s lead, he’s already coming into his own and will undeniably be a top tier bodybuilder. Hunter has the genetics for bodybuilding, he’s proven to everyone that his heart’s in the game, and as he prepares to hit the stage at the 2020 IFBB Pro League Tampa Pro, he knows what it’s going to take to do well.

2020 has been a very bizarre year to say the least. The show postponements and cancellations, totally an issue dealing with local and state government, has sidelined many of the best in our sport. With gyms closed for months and many preps put on hold, a great many competitors have decided to totally sit 2020 out. That being said, when life gives you lemons, some guys make lemonade, and that’s exactly what Hunter did.

The young bodybuilder totally changed his physique, from when he won the 2018 NPC Nationals in MIami, FL. I was there and got to interview him. He looked fantastic there, but he’s been able to change his look, reinventing himself to be more competitive at the pro level. Just a few days ago, he posted a killer video along with his dad, where he weighed 263lbs, fasted. That’s just insane!! The fact he’ll take the stage in Tampa with anywhere between 12-15lbs of added lean muscle tissue, speaks volumes about what he’ll be able to do in the years to come as a pro. Right now, the main emphasis is on making a solid pro debut. Every pro gets but one pro debut in their career, so it’s important to start out the next stage of their career correctly.

It’s also very old school that Hunter took time between turning pro and making his pro debut. Initially, I believe he’d planned on doing the New York Pro, the third largest contest in the IFBB Pro League, but was unable to due to postponements. Nonetheless, choosing Tampa will be just as much a battle, as it seems EVERYONE is throwing their hat into the ring. The reality is, even though the Olympia Weekend was pushed to the week before Christmas, the qualification cut-off is long before that. Every single pro show will be a battle unlike any other, because everyone wants to snag a qualification. This is the one year where I think a lot of guys will come off their high horses and be all too glad to qualify by points for the biggest show in physique-based sports. And while that’s fine for them, I really don’t think Hunter is looking at the Olympia just yet, I think his mindset is Tampa and Tampa only. That’s the real mindset to do well. Could he win? Well of course he would win, why would he be doing the contest, if he didn’t think so? The fact is, a lot of people are saying he could easily make Top 5, others even say he could be Top 3. The truth is, if a guy can be in either Top 5 or especially Top 3, then he can win the contest.

Hunter eats, sleeps, and breathes bodybuilding, but don’t take my word for it, just go to his channel. The videos he shares shows just how hard he works, from the exercises that require strength, to those that are more about fine-tuning. A lot of guys today won’t squat, they won’t pull, they get by with the bare minimum. Some guys who do the old school lifts, only employ minimal intensity. The way Hunter lifts and his general work ethic is precisely what will drive him, along with the support of his coach Andrew Vu, to reap great benefits in the sport.

When I interviewed him in Miami, I really got the sense that Hunter was his own man and knew exactly what had to be done. I’ll give you another example and it’s something he’s discussed on several videos, but it’s about the rebound he experienced this year. Oftentimes, the outcome of a rebound, especially given everything that was going on in the world with Covid, might have been enough for some, for most in fact, to just sit 2020 out. Instead, Hunter came out of it bigger, stronger, and even more poised to make a strong pro debut. Nothing is going to stop him, not even a pandemic!!

How he places in Tampa will be very interesting. In the days before he hits the stage, there will be a media blitzkrieg. Hunter has already been covered extensively, but we haven’t seen anything yet. The fact he keeps getting better and that he will far surpass the look that earned him his pro card, is a big reason why. It’s very likely that he will, in fact, take the stage with 15lbs of added muscle mass, but he will also be more conditioned than he was in Miami in 2018. More muscle and more conditioned?

If he takes the stage dense, ripped, and vascular, plus with all the media fanfare and the audience going nuts for him, then he’s going to totally own the stage!! Humility is great and all and Hunter is definitely humble, but if he feels like the winner from the moment he hits the stage, then that’s going to show in his posing. Great posing, after all, runs in the family!!

Hunter may be new to the pro stage, but he’s been waiting his whole life for this moment. When he hits the stage, I know he’ll make first callouts, and from there, I believe you will see an ace poser at work. How he nails the poses, how he transitions, even how he stands relaxed, will do his father justice. Posing is most definitely art, but that sentiment isn’t limited to the individual routines or the posedown, it’s very much something that needs to be hit in the prejudging. I think what you may also see, is veteran bodybuilders taking their cues from the rookie. A lot of guys just don’t know how to pose these days. It would certainly look a little unusual, but watch Hunter outpose guys who have been doing this for a decade or more. If he really goes to work and really knocks the judges’ socks off with perfectly executed and held mandatory poses, then he may end the first, and most important, round in the lead. As long as he doesn’t do anything crazy in the final 48hrs, coasts into contest day, and really destroys the prejudging, then there’s no telling how well he can do.

Are you excited about Hunter’s debut at the Tampa Pro? I know I am!! I think Hunter WILL live up to everyone’s expectations, and he just might surpass them, too!!