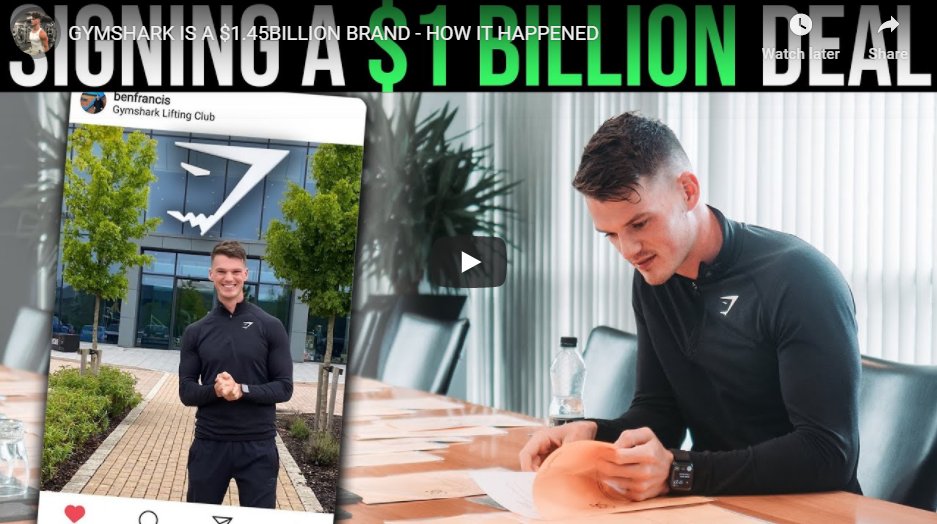 In case you’ve missed the news, the athleisure brand Gymshark has become a $1.3 billion brand thanks to an investment made by General Atlantic. Yes, that’s with a “B” and not an “M.” With the investment, General Atlantic has secured a 21% stake in Gymshark. To be totally honest with you, my brain just exploded, and here’s why.

Where Did They Come From?

Gymshark is not a new brand. In fact, Ben Francis started the brand back in 2012 (they’ve been in business eight years). That said, Ben Francis is only 28 years old (which is pretty insane to think he owns a billion-dollar business).

Now, let’s not get ahead of ourselves with the craze. In comparison, Nike is a $34.8 billion business and Adidas is a $16.5 billion business. Ben has a ways to go to challenge those at the top of the mountain, but what he has accomplished with Gymshark is no small feat.

What seemed to have put Gymshark on the map has been their social media presence. Through their athletes and influencers, the Gymshark has been buzzing around the industry and it’s hard to go to any gym in the country without seeing someone wearing some sort of Gymshark apparel.

When it comes to the demographic they cater to, Gymshark dabbles heavily in the 18-25 market. They want to completely saturate the market and have their logo on every person who walks into the gym. It’s a “cool factor” to be donning their logo – no different than people who only want to wear Nike or Under Armour apparel.

I Never Imagined Gymshark Would See $1B

For those who don’t know the backstory of Gymshark, they actually began the business as a supplement company. They then dumped the supplements and went full throttle with apparel after they found it fun and satisfying to sew and sell their own creations. What they quickly found out was that as the demand grew, so did their need to manufacture apparel quickly to fulfill orders.

A couple of years ago I wrote an article and even did a podcast regarding Gymshark vs Alphalete and pinned them against one-another (for fun, not in a negative way). From a quality standpoint, I felt that Alphalete was the clear winner when comparing the two athleisure brands. When it came to price though, Gymshark smacked around the competition with prices that were considerably lower than other brands like Alphalete.

When you look on the Gymshark website, they have men’s t-shirts for as low as $15. Browse the Alphalete website and you won’t find a t-shirt (not on sale) for under $28. When you look at the trendy joggers, Gymshark starts selling them for men at $35 while Alphalete you can’t find joggers (again, not on sale) for under $48 (more like $55 since the ones available at $48 are the old style and colors no one wants).

While the price of a product does not mean someone will or won’t be successful in business, I just never thought a “small” niche fitness apparel brand that was affordably priced would ever see a billion dollars. I guess if I were to play the other side of the fence, being that it’s affordable, people are probably more willing to be brand loyal and outfit themselves with Gymshark gear from head to toe (literally).

What Did Gymshark Do Right to Scale?

There are a few key things I feel Gymshark did right to help them grow. It would be wise for other businesses to take note of these points and implement them into their own business if they aren’t already.

Leverage the Power of Influencers

Sure, you could bring on board the most well-known influencers out there, but you’re also going to probably end up paying them a fair chunk of money to have their name attached to a brand. That said, leveraging up-and-coming influencers who are in your space and who have a following that includes your target market is a great idea.

All you need to do is provide the influencers with the tools they need to effectively go out there and push your brand for you and make sure they are wearing all of your newest and hottest apparel to highlight any new drops you’re planning.

Have Customers Tell Your Story and Ethos

Brands that do not involve their customers are missing out. One thing that helped Gymshark was the fact that they put their customers all over their social media. Testimonials, product shots, customers showing off their physique in their apparel, and even workout videos sporting Gymshark apparel.

Additionally, the brand wasn’t afraid to put up polls and ask questions about what customers would like to see next from the brand. This shows they value their customers and their opinions/wants. Most brands, unfortunately, put out products without ever asking what their paying customers want. This is a mistake. Listen and customers will tell you anything and everything you want to know.

Not all brands have outrageous pricing, but with the growth of Gymshark, they could have easily raised the price on their apparel – but didn’t. You can’t help but respect that and appreciate the fact that the brand is more about putting out good quality products that are affordable rather than putting out quality products that are way overpriced. In an interview, Ben mentioned that he prices his products off of “what sounds right.” Respect!

I think Gymshark has just scratched the surface of their potential and growth and with General Atlantic as part of the team, I feel they will expand internationally and make a huge splash.