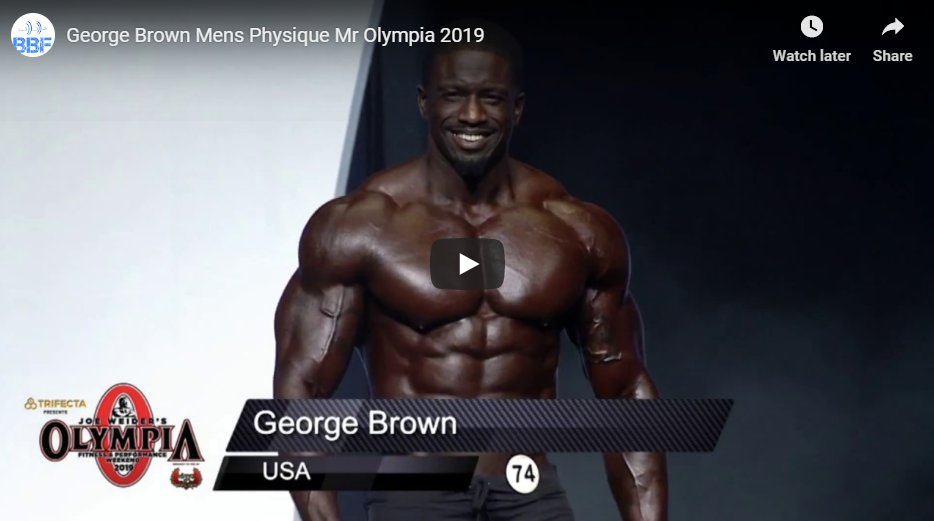 Talk is cheap, but when it comes to Easy Money, King George wastes no time. Anytime the seasoned Men’s Physique champion enters a contest, the competition switches gears. He’s a heavy hitter and everyone knows it. Yes, he talks and yes he believes in himself, but this is an athlete who can back it up. Ever since he won his IFBB Pro card at the 2013 NPC North American Championships, it’s been uphill since! His placings speak for themselves, with wins and top honors at some of the most prestigious contests in the IFBB Pro League.

Perhaps the most well-known, and arguably controversial, of his contests was the 2016 Arnold Classic, where he took second to Brandon Hendrickson. Many people, including media pundits, handicappers, and fans, opined that Brown should have won. To date, it remains as one of the toughest battles in the division. With that being said, George doesn’t live in the past. To date, he’s competed in tons of contests over the years, but as he preps for the 2020 Arnold Classic, with coach Mandus Buckle in his corner, people can’t help but notice how on point his prep is. For many, the Arnold Classic is a two man show, between favorites Andre Ferguson and Brandon Henrickson, but King George is looking to upset the apple cart. If anyone can do it, it’s him, and it would be a great win, for a variety of reasons!

George is a true ambassador of the sport. He works the media side, through his work with Maximum Muscle Report, doing interviews throughout the country. Wherever he goes, he’s recognized by competitors and fans, alike, and he always makes time to speak with them. Competitors love to pick his brain, many will pose for him, hoping to get any feedback from one of the sport’s hardest working guys. No one out-trains George – he takes every workout to the limit. He trains hard, he trains smart, and he’s constantly raising the bar. That’s how champions do it. Fans tend to mob him; they love to interact with him, and oftentimes ask him for photos, autographs, and/or to chit chat about the sport. While some celebs would wave off fans and/or pay them little mind, George makes sure that his fans and friends get his undivided attention; he’s down to earth and treats everyone with respect. He’s precisely the kind of Pro that’s growing the sport and who would be a fantastic Arnold Classic champion.

In addition to being very well liked by competitors and fans, George is highly sought after by the biggest, most respected, companies in the fitness industry. His work ethic is unparalleled and he will only work with people that put out products and services he believes in. While top athletes might get lucky and land a deal, few will get those contracts renewed. The reason being, most athletes like to set big goals, but seldom live up to their promises. George is old school when it comes to his business dealings. If he believes in your company and you sign him, he gives 110% the whole time he’s under contract. It’s that mindset and commitment that make him sought after. The fact he delivers on stage and has never walked away with bad placings, is no coincidence, either. When you compete with the best and you consistently do as well as George, it’s because he gives his all – every single time!

George has created a look, from his signature poses to his stage presence, that command respect. In addition to everything that’s been stated, Columbus is home – this is George’s town!! It’s about time that a hometown champ wins the title and keeps it local. If anyone can accomplish this milestone feat, it’s King George Brown!

As we get closer to the contest, be sure to make your travel arrangements and don’t you dare miss the 2020 Arnold Classic!! Arnold, along with Jim & Bob Lorimer, Mike Davies, Matt Lorz and the whole Lorz Family, will put on a contest and expo unlike any other. I hope to see you all there!! I also hope to see my good friend KING GEORGE BROWN Win It All!