Did Gymshark Bite Off More Than They Could Chew with Distasteful Comments? 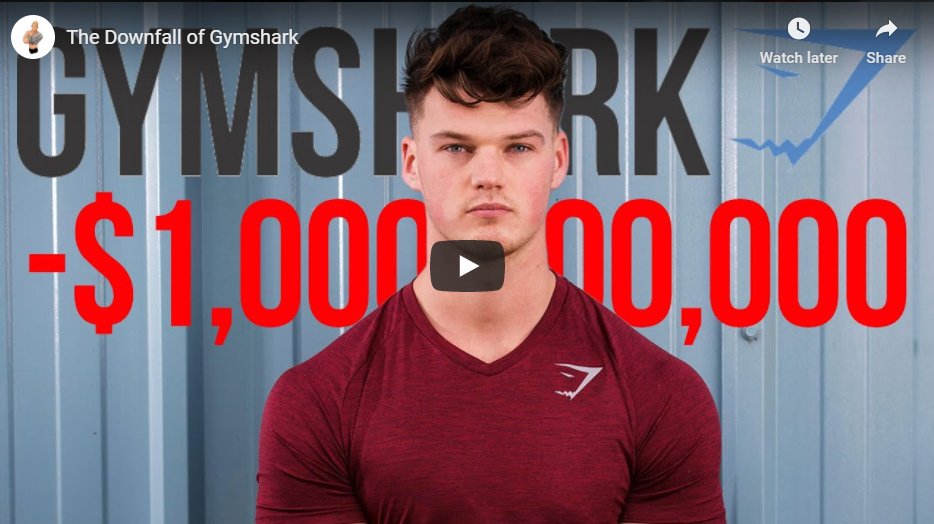 Where do I even begin with this article? To say I’m disappointed in Gymshark is an understatement. Sure, you could say, “No one cares about your opinion, Matt, they are a billion-dollar company.” And you’d be correct. However, looking at their Instagram page comments, I’d say there are thousands of people who agree with me and are angry at their poor and distasteful words.

Now, last month I wrote an article talking about how impressed I was with Gymshark and the young owner growing to a milestone of a $1B net worth. Never in my life would I have thought Gymshark would grow to achieve such a number. That said, there’s a good chance that the number just dropped considerably.

Social Media Comments Are Like Plastic – They Never Go Away

You may think removing a post where you made some poor comments could save you the embarrassment and backlash, but what you put on social media will be there forever. People will screenshot your posts, comments, statements, and in this case, distasteful remarks.

In the wake of what’s going on globally, Gymshark decided to make some comments that may not represent everyone in the company or even the company itself. However, being that they also made a blog post about the BLM movement in June, it may be safe to say they meant every word they typed.

That said, I’ll give the company the benefit of the doubt that maybe there was a social media manager who went rogue and let their emotions get the best of them. Regardless, what was said could hang over their heads for quite some time.

On the Gymshark Instagram page, they made a post that has since been deleted that said, “Imagine a brand supporting body positivity + black lives matter bothering you… well, stay bothered because we’re not going to stop.” While I have no problem with people voicing their opinion, there are simply some things that businesses should stay away from touching unless they are looking for some negative comments.

While there is nothing wrong with their post, things went sideways quite quickly down in the comment section. Some people commented, “What about blue lives?” to which Gymshark commented back with “YES can’t wait for Avatar 2.” Ouch. Talk about distasteful. Clearly, whoever is posting on behalf of Gymshark has a major issue with police and probably would have been better off keeping his or her comments to themselves. Then again, this individual has probably lost their job over all of the comments made. But wait… there’s more.

Another person commented, saying, “Looks like @gymshark lost every single police officer that lifts.” To which Gymshark fired back with, “we’ll be okay.” And these are just two of the comments that were screenshot and will never go away even though they took the post down.

I’ll be honest, the comments pissed me off. So much so that I won’t be supporting them until I see a change in the company. I understand the hatred towards police officers, but you’re looking at the minority and not the majority of police officers. Not all cops are bad. Are there some cops that should have never been hired? Absolutely. But to paint the picture that they are all bad is simply not accurate.

Here Are My Thoughts and Opinions on the Subject

This is my article, so clearly, I’m going to give my thoughts and opinions. And being that I supported the brand in the past and purchased some of their apparel, I feel I have such a right.

Telling people, “we’ll be okay,” is quite cocky and arrogant. You’re basically saying you don’t appreciate all of the support that the police have shown you who purchase your apparel and the customers of yours who support the police and have family members who are police officers.

Gymshark sells its apparel worldwide, not just in the UK, where they are based. Pissing off Americans with your remarks is never a good idea, and my opinion.

Now, I heard Gymshark posted a response after taking down the initial Instagram post, but I looked, and I cannot find it anywhere on their page. Maybe the post was getting a ton of hate, so they removed that one as well? Who knows? Apparently, the post mentioned they are sorry for the comments made, and they don’t represent the company as a whole, blah blah blah. It’s damage control at this point and quite frankly could be lip service to try to deflect the hate they are getting.

Honestly, I don’t care what they said in their apology post. What they posted before that was completely unprofessional, and if that individual was not fired, I hope people go out and boycott Gymshark for allowing such a hateful person to work in their company. And if we find out the owner was the one who made the comments, I’d love nothing more than to see the owner get pushed out of his own company and be forced to resign or sell.

I support the police. They have a job that not many people would raise their hands for. I don’t rely on them for my personal protection and safety (I put that responsibility on myself), but they play an essential role in our society.

While a small fraction of their job deals with the need to engage a deadly threat that poses harm to the responding police or other civilians, most of their calls are resolved peacefully and without incident. Despite what has been shown and shoved down our throats on the news lately, the police are here to help.

What are your thoughts on what Gymshark said on their Instagram account? Do you think what they said was appropriate, or do you feel like they crossed a line and deserve the hate they are getting? Let us know down in the comments.