Did Derek Lunsford Chase Flex Lewis Out of the 212? 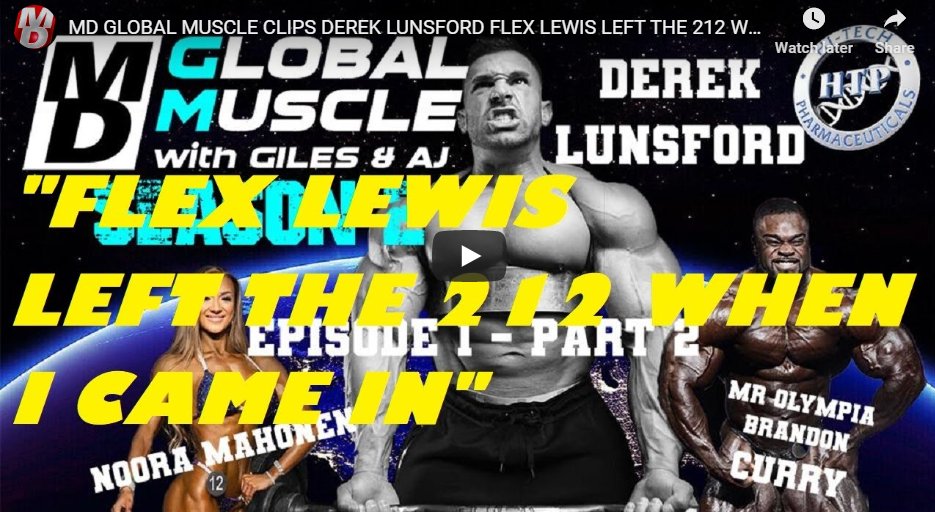 Ok… where are the hidden cameras? Are we on an episode of Punk’d? Let’s go ahead and answer this blatantly obvious question, right off the bat, with a resounding, unequivocal, HELL NO! I like Derek and I admire his sense of self. I also admire his ability to keep a straight face, even when (one would hope) he was kidding.

When Lunsford half-made the above statement, closing out his appearance on MD Global Muscle, he must’ve expected a reaction. This wasn’t a set-up question, the hosts weren’t looking to ambush him, and Derek was in full control. This was a genius move in terms of shock value, but perhaps I perceived differently than you. Let’s end the first paragraph of the article with a question. How did you take Derek’s statement, suggesting that as soon as he joined the 212 Division, Flex Lewis left? The hosts laughed. I was stunned. What was your reaction?

On that note, I’d like to say that I’m a huge fan of MD Global Muscle and am stoked they just launched their second season! It’s no secret that I’m a huge supporter of Muscular Development, having had a short-run series there, and actively buying the magazines. I think Ron Harris has done a fantastic job as Online Editor in Chief, from his Ronline Report to the complete overhaul and revamping of the message boards. The addition of Giles and A.J. has also injected considerable new life into the site and magazine. These guys live and breathe bodybuilding and they do absolutely amazing work.

With that being said, I’m also a fan of both Derek and Flex. I know Derek and he’s always been very kind to me. We’ve done several interviews and I think he’s a great person. I’m also a fan of Flex’s and consider him to be quite possibly the greatest 212 bodybuilder of all time. I have said it before and I’ll say it again, Flex dominated the 212 far more convincingly than Phil Heath dominated the Open. Lewis’s physique, posing, and drive to win were simply unparalleled. He won seven straight and decided to move on, leaving the division on top, and in my opinion, doing so to give others a chance. Again, that’s just my opinion.

2019 was the very first Olympia I attended. My good friend Dan Solomon made sure to get me press pit passes and I was able to see all the action from a very proximate distance from the stage. With that being said, I was really looking forward to seeing what all the hype [behind Derek] was all about. He had an amazing rookie year, looked good when he took second to Flex, and I was really eager to see what he’d bring.

I was let down by my colleagues in the press, however, seeing how established legends got treated. Top guys, especially guys who pushed Flex Lewis to the limit years prior, guys like David Henry, Eduardo Correa, and Ahmad Ashkanani, found themselves virtually ignored. The guy who would go onto to win the title, The Lion of Libya, Kamal Elgargni, literally came out of nowhere. People were so in the dark about him, they were frantically flipping through their programs when the MC called his name. Some had no idea who he was.

As soon as prejudging started, I had it as a fight between Kamal and Shaun. I think Shaun had a very legitimate claim to runner-up and in certain poses beat Kamal. Shaun, like all the others, got little to no media attention leading up to the contest. Hell, David Henry and Guy Cisternino had to go out and win post-Olympia contests, just to remind the media that they were ready to do battle and worthy of coverage.

We all know what happened at the 2019 212 Olympia Showdown and I, for one, was hoping that it would be a learning experience. I was hoping that Derek would hunker down, get away from all the media fanfare, and focus on working towards the title. I believed him when he said he didn’t ask to be the heir apparent, all throughout 2019. I blamed the media for putting the spotlight on him. It was the media’s fault, in my opinion, who put all this unwanted pressure on this poor kid’s shoulders. Who knows, maybe if they’d just left him alone, he could have done way better?

Well right around this time last month, Derek made a video saying he was done taking 2nd place. I nearly wrote an article on it, but decided not to. Now, he’s on a show with MD, suggesting he chased The Welsh Dragon, James “Flex” Lewis out. Again, maybe I’m perceiving his statements incorrectly. What’s your take?

Here’s the deal. This is simply my reaction to what I considered a very bizarre statement on a very good bodybuilding program that I watch. I make the same amount of money if this article gets my usual reads or if it goes viral. I’m not looking to get famous off reacting to others’ words and I’m certainly not looking to troll anyone. That being said, I’m a journalist, and as a journalist, I have to report the news.

With regards to physiques, you take Derek at his best and put him side by side with Flex at his most vulnerable 212 Showdown victory, and I still think Flex wins handily. That’s no knock on Lunsford. Flex Lewis is the best, he won seven years straight, and left on top. Even the year Derek took second, no one in the hall thought Lunsford would topple Lewis – it simply wasn’t that close. And what’s worse, if Derek keeps poking at Lewis, maybe Lewis will have to pull an Arnold ‘80 move. If only Frank Zane hadn’t brought up that Universe win, maybe Arnold never would have come back. Even still, when Zane made that comment, he was a 3x Mr. Olympia. If Derek had won in 2019, even in Lewis’s absence, maybe this type of statement on MD Global Muscle might have had at least had some semblance of credibility, but he got beat in 2019, and beat by a guy nearly twice his age and who had zero hype or press behind him.

Kamal is King. He will fight tooth and nail to successfully defend his title – you can rest assured of that!

With regards to the contenders, there’s A LOT of hunger and A LOT of anger after the cold shoulder the media gave them all last year. Guys like Clarida, Henry, and Cisternino, just to name a few, will be coming back with a vengeance! I’m pretty sure they didn’t like being ignored and I’m sure they won’t allow themselves to be again.