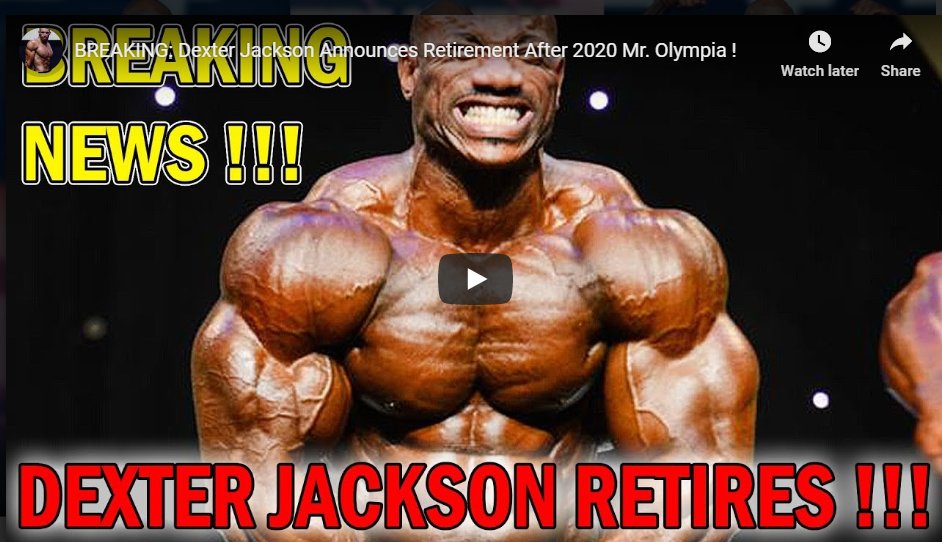 The time has come when 9x Arnold Classic champion and 2008 Mr. Olympia Dexter “The Blade” Jackson will retire. For years, many of us thought the day had arrived, only for Dexter to win more shows, land more covers, and ink more contracts. He shut so many people up, year after year, myself, Most Definitely, included.

That being said, the date for his final contest has now been announced. In many ways, considered the senior statesman among his peers, Dexter always presented the higher road. Unlike many of his contemporaries, who oftentimes got bogged down in silly feuds, The Blade focused on the work necessary to bring the best physique possible – that was what mattered. We never saw Jackson look sloppy, either; he was always on point, and always an inspiration for countless fans. With that being said, he was also a bridge, of sorts, spanning many generations. Dexter competed in the 90s, the 2000’s, and 2010’s. He got to battle with Ronnie, Phil, and Jay, winning his own Olympia title in 2008. His run at the Olympia has been a spectacular one, making his mark on it’s Top 5 longer than anyone. In fact, for much of his run, 7x Mr. Olympia Phil Heath was always very apprehensive of Dexter’s presence, considering him (not Kai or anyone else), as his chief competition. And that right there makes all the sense in the world. Dexter is always, very dangerous, and whoever doesn’t know that – learns it, and awfully quickly!

Ironically though, Dexter has been consistently overlooked his entire career. Just a few days ago, I ranted on IG about this very point and he and I spoke at length, privately. His fans, and I definitely consider myself to be one, go nuts at the fact he doesn’t get more press. He doesn’t talk smack, he doesn’t make crazy claims, he’s low key and hardworking. Sadly, today’s industry press seems obsessed with sound bites and sensationalism, so an old-school, blue collar bodybuilder like Dexter Jackson often gets ignored. Also, quite a few pundits are hung up on his age, even though Dexter routinely annihilates competitors 20-25 years his junior. Handicappers haven’t been too kind to him, either.

You would think that the winningest competitor in the history of bodybuilding, with a Sandow, and 9 Arnold titles would get tons of accolades and attention, but that’s simply not the case. For his entire career, he’s been very much an underdog. No one thought he’d win the Olympia, no one thought he’d keep going after 40, and no one thought he could reinvent himself at darn near 50 years of age. One look at Jackson from last year’s Tampa Pro and you got the feeling like he could compete forever!!

Last year at the St. Louis Pro, however, Dexter hinted at possible retirement, but you also got this vibe like it was something he really wanted to avoid. For what it’s worth, I think Dexter could easily go another 2, 3, maybe even four or five years as a top competitor, but why not retire now, on top, and turn a new page? That’s just it, competing is but one – of many – roads he can take. The man is a living legend.

Once Dexter retires, the sky’s the limit for him. He could put his team back together, he could work with A List celebrities, and/or he could write books. He could go the media route like Shawn Ray, he could emcee like Bob Cicherillo, he could even launch another supplement company. I mean, what media outlet wouldn’t trip over themselves to work with him? He’s also a very successful contest promoter and as the IFBB Pro League spreads like wildfire, he may even want to petition for more contests. Who wouldn’t want to compete at a Dexter Jackson contest?!?!

With regards to the 2020 Mr. Olympia, this will be Dexter’s last contest, but if anyone thinks he’s doing the contest just as an excuse to give a farewell speech, you better think twice. Very few champions on this level get the luxury to pick their last contest, announce it with this amount of notice, and really give the press time to prepare. If I know The Blade, he’s going to give this show his all! He may do a few Arnolds, as he’s already signed contracts, but when it’s time to prep for the Olympia, I have a feeling him and Charles Glass will have some tricks up their sleeves.

That being said, what happens if Dexter wins in a little under 3 weeks in Columbus? Most of you are probably saying what you’ve been saying all along, that the winners will be Bonac or Ramy, never giving Dexter any kind of chance. What happens if he wins though? What happens if he he pulls an upset in Las Vegas? Absolutely no one should rule that out. We’re not talking about a 50yr old bodybuilder – we’re talking about Dexter Jackson!!

Also, if there’s ever another Masters Olympia, a guy like Dexter could win that in his sleep; he could be like the 20’s version of Vince Taylor and why not? He hasn’t even retired yet and I’m already thinking about scenarios where he might continue competing on. That just shows you how much Dexter Jackson means to bodybuilding fans. He’s become a staple. He IS Bodybuilding.

I hope we see a mountain of media interest for this living legend, from all the major websites, worldwide, because the fans want to see him and we want to hear from him. I also hope that the promoters of every contest he enters, blast the net with graphics centered on him and I hope the fans come through like crazy, on every social media platform, message board, and through word of mouth, really showing their unconditional support for one of the most important bodybuilders of the last twenty years (if not of all time!).