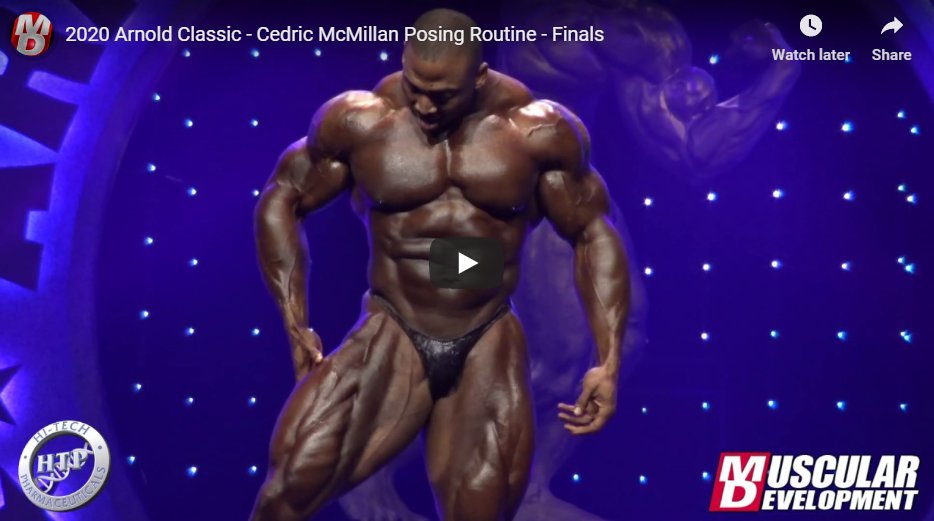 The 2020 Arnold Classic will go down in history for a variety of reasons. For starters, it brought together one of the best lineups in the history of the sport. You had former champions in William Bonac, Cedric McMillan, and Dexter Jackson all in the mix. You had rising stars like Patrick Moore making some waves. Big Ramy made a return after a year-long absence, looking a lot like in the old days. Sergio Oliva Jr. looked extremely impressive, even earning The Best Poser Award. Cedric made Top 6. It was also great to see veteran competitors really nail it, guys like Maxx Charles and Akim Williams. One veteran competitor who really made jaws drop was Steve Kuclo, who placed 4th, showing vast improvements.

With that being said, the contest will also make the history books because of the coronavirus, the canceled Expo, and the limbo in which the amateur and even pro events hung. All in all, however, the show went on and fans all over the world got to see a great bodybuilding show from the convenience of their own homes. The live feed has improved by leaps and bounds, so much so that fans felt like they were watching PPV – total home run!! On a final note, something more needs to be said and so much so, that it inspired this article. As Bob Cicherillo was concluding the post-show wrap-up, former Arnold Classic Champion Cedric McMillan interrupted the program. He was walking by, saw the coverage, and felt the need to interject some points. Usually, when someone crashes an interview, it’s either something humorous and/or might be something contentious; however, McMillan had some very important things to say. His message spoke to bodybuilding’s yesteryear, to when there was more camaraderie, and the need for that today.

One of the points Cedric made, which I think resonated with Cicherillo, is that back in the day, bodybuilders had a real sense of community. There was a far stronger tendency to help each other. The guys weren’t off on ego trips. I think over the years, the media and the business side of the industry, have pushed the athletes to be a lot more adversarial than they needed to be.

Bodybuilding isn’t boxing. One competitor’s actions, be it their prep, posing, or even the look of their physique, won’t shut the next man or woman out. The best physique wins, but physiques are all different. In basketball, a layup is two points and an outside shot can be 3. That’s definitive. You shoot the ball and if it goes in the basket, you get points; the team with the most points, wins. Basketball – and most sports, for that matter – is an objective sport. Bodybuilding is a subjective sport. Yes, there’s points in a bodybuilding contest as well, but the points are scored based on the opinions of the judges. The opinions of the judges are what decide. The placings aren’t in the athletes hands.

McMillan made a very good point, when he said that bodybuilding isn’t a competition of athletes against athletes, rather, it’s a sport where each athlete must be their best. If a bodybuilder comes in at 100% and poses at a 100%, then he/she has done everything in their power to win. There’s no reason for that bodybuilder to elbow it out with others, to avoid others backstage, and/or to throw shade on any other competitor. So why do it?

Nostalgia always seems better than the present. I don’t care if it’s movies, music, food or even fashion. People love the past, because the past is rich with memories. Some people live through their memories, while others live in them. The truth is, however, that Cedric is right. Back in the day, bodybuilders trained together, ate together, and sometimes even lived together. If you look at Arnold and Franco, Lee and Paul, and so on, you start to see a level of camaraderie that you just don’t see today. Back in the old days, bodybuilders would even share their carbs backstage, but what about today? Today, it’s every person for themselves, and it really doesn’t have to be like that.

We are very fortunate to have Mr. Olympias like our reigning champion Brandon Curry and our (temporarily) sidelined Shawn Rhoden. That’s no typeo; he’s our Shawn Rhoden. Brandon is our Mr. Olympia. These great champions represent the very best of our sport, they’re tirelessly growing it, and tirelessly trying to be positive, even as trolls and haters do their damndest to pin everyone, even them, against each other.

Look, the buck doesn’t stop with the athletes. We can’t, and Cedric certainly doesn’t, blame just them. In fact, he doesn’t blame anyone. I, however, will. There are trolls among the fans – fake fans – who revel in drama. There’s also quite a few media outlets that depend on clickbait, fake news, and sensationalism to sell advertising and remain relevant. Well, being relevant is a pretty subjective concept, too. I say they’ve made themselves irrelevant, but that’s my prerogative. There’s also quite a few supplement companies, who in order to sell more pills and powders, like to encourage divisions, drama, and even downright hostility among competitors. There the athletes have less of a say – and like the rest of us – they have bills and obligations. Should athletes insist they only be part of positive ad campaigns or they walk? The Top 5-10 pro’s of each division could possibly do that and not get the axe, but average pros and the few top, nationally ranked, NPC competitors with good contracts, they’d more than likely get axed and replaced.

The bottom line is, I’d like to go one up on Cedric’s plea and encourage the media and the industry to consider McMillan’s take of more camaraderie among the athletes. The fans have always been on board for this. With regards to the trolls and haters, it’s pointless even talking to them; it’s akin to talking into a dead phone.