Newer PostIs There Loyalty in the Supplement Industry Anymore?
Older PostCalling Out Lee Priest Using Fake Weights
Share on FacebookShare on TwitterShare on LinkedinShare on Pinterest 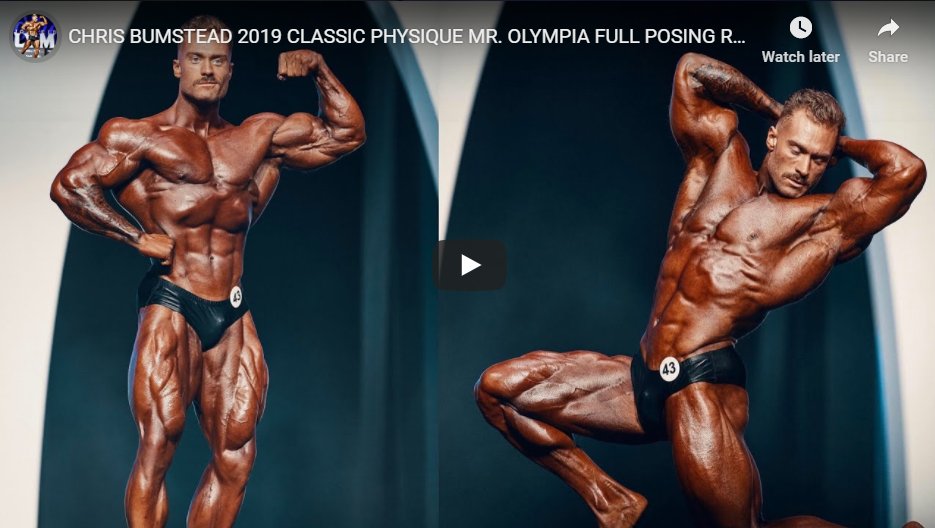 While I wouldn’t say I’m the biggest fan of the Classic Physique division (I prefer to follow Men’s Open), it’s hard to not appreciate the physique they are bringing to the stage. Last year, Chris Bumstead took home the crown at the 2019 Olympia which was under scrutiny by many in the industry. That said, I felt as if he deserved the win.

This entire off-season, others in Classic Physique have been taking shots a Chris Bumstead in interviews as well as their social media platforms, saying he doesn’t have a complete physique, he has lagging body parts, he doesn’t deserve the title, this that and the other.

I know one thing, true winners aren’t out there talking smack. They show up in shape and get the job done. There’s nothing they need to say as their body does all of the talking. Chris Bumstead is confident – and he has every right to be sitting as the reigning Classic Physique winner. However, I do feel as though some people within the IFBB are trying to create drama to make things interesting going into the Olympia prep in a similar fashion to the Olympia press conference which in my opinion has been a shit show for years.

The question many are asking now is whether or not anyone is going to be able to knock down Chris Bumstead at the 2020 Mr. Olympia being held in December in Las Vegas.

Talk is Cheap – Show Up Ready

If you keep up with the industry, you’d be more than aware that several Classic Physique competitors have gone on camera to throw some shade at Chris Bumstead since winning the division at the 2019 Mr. Olympia.

I think it’s kind of funny that they are talking so much trash about his physique. I guess they have amnesia, as he beat them all last year. So, what does that have to say if Chris has all of these “weak points,” yet he beats you? I guess that means your physique is worse. Congrats.

Here are the facts. Chris is a big boy. Standing at 6’1”, he’s not your typical “bodybuilder.” In fact, he’s significantly taller than most of the Classic Physique lineup. That said, Chris Bumstead has great muscle shape, symmetry, and clean lines. When standing next to other competitors, it’s hard to not put your focus on Chris – he stands out.

I’ve been watching Chris during the off-season and his training is no joke. He and William Bonac are basically pushing the same weights and Bonac is in Men’s Open. I don’t see other Classic Physique competitors pushing the same amount of weight that Chris Bumstead is. Granted, Classic Physique (or any division) does not measure or take into account how much weight you can lift. However, it’s clear that Chris is not slacking in the gym and is focused on growing into his 2020 Mr. Olympia preparation and wants to retain the title.

What Will the Judges Be Looking For?

It was clear in 2019 that the judges liked and appreciated the physique that Chris Bumstead brought to the stage. Does that mean no one else looked worthy of the title or didn’t deserve to be on the same platform? No. However, I appreciate the fact that the judges (in their eyes) want the sport to move towards a physique similar to Chris’.

This is just my opinion, but when we are talking about Classic Physique, it’s hard to not think about a vacuum pose. While it’s not a mandatory pose, I feel like it should play a significant role in the judging as THAT was part of what made the old school physiques stand out compared to what we see in divisions like the 212 and Men’s Open today.

There are a bunch of people who wanted to discount Chris’ physique, yet they can’t get anywhere close to hitting a vacuum pose. And yes, I get it, we shouldn’t put a ton of focus on just one pose, but (again) in my opinion the pose needs to be included in the judges scoring. If the judges look at the Men’s Open distension issue and deduct points, competitors who can hit a vacuum pose should be rewarded for being able to control their midsections in such a manner.

Who Can Dethrone Chris Bumstead?

I’m just going to make a bold prediction right now, months before the Olympia. I believe Chris Bumstead is going to win his second Olympia title and keep his crown. Here’s the caveat – he needs to come in extremely conditioned. What worries me slightly is that Chris looks to have put on a good amount of size this off-season. Will he be able to nail things after adding a considerable amount of mass? Will his body react the same way it did last year with this new muscle? Only time will tell. But if Chris Bumstead comes into the show diced and feathered, I don’t think anyone will be able to defeat him.

Let’s jump to the other side of the fence. Should Chris come in off, who has a chance of beating him? Last year was pretty close between Chris and Breon Ansley. If anyone were to test Chris and give him a run for his money, even on a good day, it would be Breon. While I’m a fan of Bumstead, it’s hard to brush off Breon’s physique. After all, he’s basically and walking, talking, men’s classic physique sculpture.

Third place in 2019 went to George Peterson who isn’t even in Classic Physique anymore and has bumped up to the 212 division where he won the Tampa Pro this year. So, he’s out of the picture and a non-factor. Who’s next? Probably Keone Pearson, no? Keone placed 4th in 2019 behind Peterson but is looking great during his off-season which begs the question of whether or not he could edge out Breon.

All in all, it’s going to be an interesting Olympia (across ALL divisions). With the excitement of December and the holidays, we have one more thing to look forward to from the industry to close out the year.

Who do you think is going to win Classic Physique this year? Will Chris Bumstead keep his crown, or will someone come in and snatch it from Chris? Let us know down in the comments section.