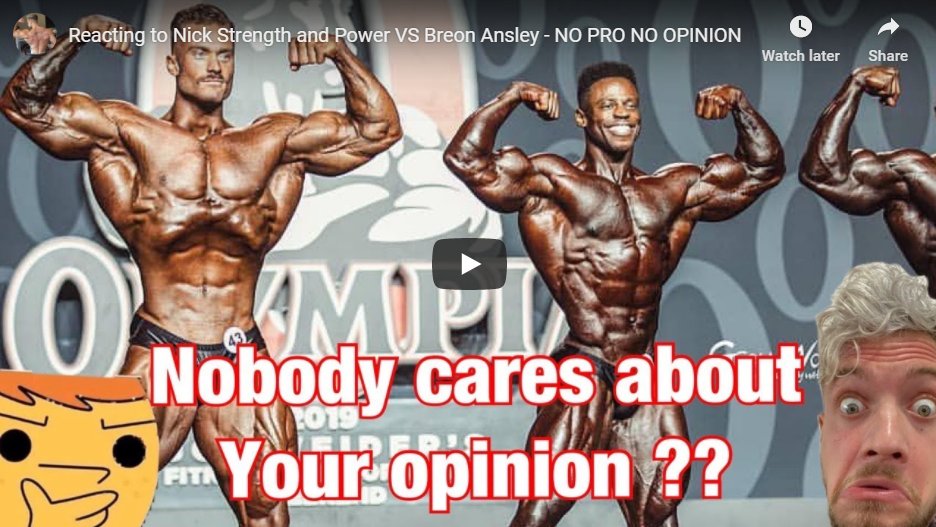 First of all, I don’t think there’s a “feud” at all, most definitely not from 2x Classic Physique Olympia Breon Ansley’s side. Here’s what basically happened, as far as I see it. NIck Miller, aka Nick Strength And Power, is the most popular YouTuber. Miller made some predictions, Breon Ansley disagreed, laid out his points, and took Miller to task.

Nick isn’t used to that. Being the most popular YouTuber, backed by a supplement giant, he’s accustomed to fitness celebrities fawning over him, wanting his stamp of approval. Ansley is a self-made superstar, competing on stage at the highest levels, and winning the crown jewel of physique-based sports – twice.

The reality is handicapping in bodybuilding has always been a contentious ordeal; competitors give so much to bring their best to the stage, especially former champions looking to reclaim their previous titles. These athletes, in particular, aren’t just working to bring the best they can for that particular year’s event, they’re not just up against the competition, but in many instances former champions are up against their best previous looks. What do I mean by that?

Well, in Breon’s case, he could quite possibly look his awesome in 2020; however, he might be held to a higher standard. He might be held to the years he won the Classic Physique O. Once a champion hits a certain level of excellence, for many it’s all about beating that look, not just bringing their best on a particular year.

I don’t believe there’s a feud, but should one ensue, the only person who would benefit from it, is Miller.

I don’t have any real issues with NS&P. He does have me blocked on Instagram, even though I don’t know why? My guess is that he doesn’t process criticism well. And isn’t something that he’s so perturbed that Breon responded to his predictions video? If you’re going to be involved in this industry, you have to have thick skin. Critics might counter with, why don’t I hold Breon to that standard as well? I do, I definitely do; however, Breon is a champion just months out from the biggest contest of his life. He’s allowed to be annoyed that a YouTuber is saying things like the “new direction of judging” will ensure that Chris will beat him. What does that even mean? The direction of judging? Is Nick even a judge? Has he ever test judged? Sounds like hot air to me.

Are Nick’s detractors correct when they say no one takes him seriously? Well, let’s put things into perspective and let’s be honest. This is Iron Magazine, after all, and I am The Iron Duque (Iron, Lol, I’m fat, but Dave Palumbo gave me that nickname, so I roll with it).

When I met Nick at the 2019 Olympia, our mutual friend Hector Mendoza introduced us. Nick was accompanied by a friend and was a lot shorter than I thought he’d be, but I’m 6’4, so everyone’s a midget to me (especially in bodybuilding). Anyways, his approach was typical of a super popular kid online, testing the waters in person. What I mean by that, is that he’d walk up to booths, waiting for that moment for the athlete (hopefully) being starstruck and recognizing him immediately. The reality is, I didn’t see Nick get mobbed by screaming fans.

For the most part, he blended into the crowds and walked around with his friend. I’m not saying he’s not a celeb. He gets milllions of hits on Youtube and I get practically no views, in comparison. The difference is, and I love it, is that the people who watch me are key and the people that watch him, well.., let’s just say, his nearly 1 million subs are not Pros, Judges, company owners and/or amateurs in the trenches.

Nick gets a lot of views from people who don’t compete, don’t buy tickets to contests, and maybe don’t even train or use supplements. I’d say a lion’s share of his audience are trolls and that’s ok, because anyone who can reach that many people, is impressive and highly marketable, but when a champion like Breon Ansley points out no one takes Miller seriously, that’s going to sting awfully hard. And that’s probably because it’s the God’s honest truth.

Handicapping videos will get a lot of blowback so if you’re going to make them, expect that, and don’t cry when an athlete knocks you off your high horse. It’s happened to me on countless occasions but it’s just part of the business of bodybuilding. I also think that social media influencers weighing in on the sport is still something that’s going to take some time to go over. There’s no question Nick Miller is a journalist and a great one at that, but he’s never really written for a real magazine, he isn’t a guru, and he’s not a competitor. I know he did a few local shows, but to an Olympia winner, he’s not considered a competitor. I’m in the same boat as Nick, though my extensive contest coverage (at shows) and the fact my work is less about clickbait and more about the athletes, gets me some added credibility, I’m still having to constantly prove myself.

In the end, there is no real feud, here. Breon could care less about what a guy talking into his webcam thinks and Nick, I’d think, having the last word, will be done with this, also. I can’t imagine Ansley will fire back. As the Olympia fast approaches, i’m sure Nick and others in the media will make their predictions. If feelings are bruised, I hope journalists brush it off, and keep going. This is, afterall, just bodybuilding.

Where do you stand on all this?

Newer Post
Muscular Development Is the Last Standing Magazine: Do They Have an Advantage?
Older Post
Was It Redemption – Or Destiny?