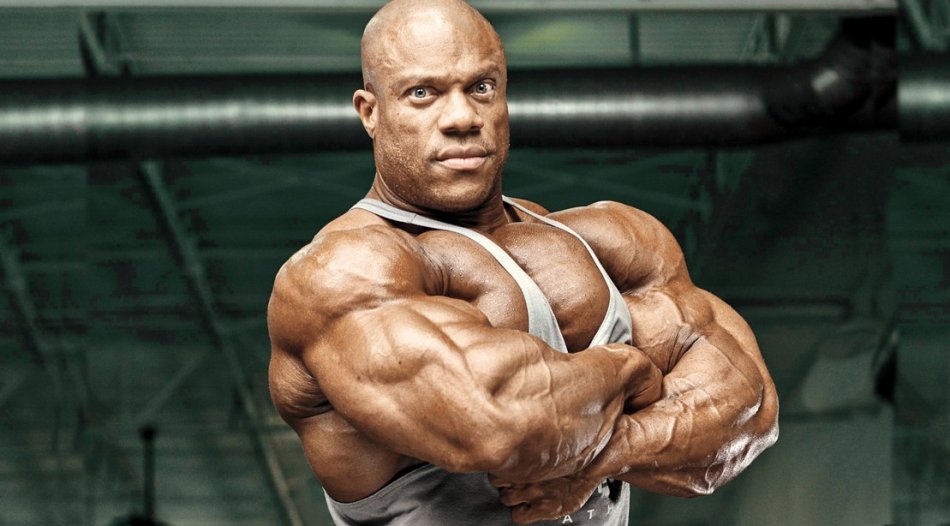 A new Netflix series, titled “Breaking The Olympia,” is said to be in the works, featuring 7x Mr. Olympia Phil “The Gift” Heath. I just checked out an interesting interview clip between the legend and Muscular Development’s Giles “Tiger” Thomas. In the interview, Phil insists he doesn’t want to cry over the past, but it’s clear he holds some disdain for Generation Iron and their portrayal of him in the major motion picture. Heath, who had historic battles during his tenure as the world’s greatest bodybuilder, was nearly edged out in 2016 and eventually toppled in 2018 by Shawn “Flexatron” Rhoden. Despite being injured and off, Phil gave it all he had in 2018, but it would not be enough to stop the Flexatron Train from crashing through Phil’s beleaguered opposition. The 7x champ really battled, though his efforts, in the face of Rhoden’s onslaught, proved hopeless.

Following his defeat, the ex-Champ underwent surgery, and focused in the gym. Many thought he’d return in 2019, but any speculation was put to rest at the Olympia press conference. Phil has been very vocal though, critical of Mr. Olympia Brandon Curry, arguably through proxies, as well as undergoing a simultaneous PR makeover. He’s been very busy doing cookie-cutter interviews, promoting his Phil Heath Labs, and releasing content that, at least, suggest a possible return. There’s no question, if Phil wants to come back and puts his heart into, he can do very well, but it won’t be a cakewalk. What’s interesting, however, is Phil recollection of the past.

In the portion of the interview I saw, Phil told Giles that he felt that Generation Iron’s portrayal of him, brought him both a bad rap and good fortune. Unlike documentaries, which simply tell the story, Generation Iron sought to follow in the footsteps of Pumping Iron. In fact, many saw a direct similarity in terms of promo and the reactions of folks who watched it. It was a very well done picture, with great resources, and an excellent plot. With that being said, if Phil came off like a heel, it may have been, in part, a part of the plot, but it’s his voice I hear, his mannerisms I see, and his whole customary approach to things, all throughout.

When Phil talks about how easily he sacked 4x Mr. Olympia Jay Cutler, boasting he beat him with a perfect score, that wasn’t the product of video splicing. The fact is, Jay discovered Phil; he was very supportive of him when he beat him in 2010, he was extremely supportive when Phil won, and Jay made sure to treat Phil the way he probably wished Ronnie would have treated him. That relationship, however, suffered through the years. Phil stopped showing Jay the kind of respect Jay deserved – at least that’s how I perceived it, from my position in the media. That wasn’t Generation Iron’s fault, just like you can’t blame the film for Phil’s behavior relative to Kai Greene in 2014, Shawn Rhoden in 2017, or his war of words with, then, social media superstar Luimarco. When a person wins the Sandow, it’s like winning The Stanley Cup or The World Series; the last thing you expect, is the champion to be talking smack into a phone, while his entourage walks behind him, aimlessly. That’s a bad look and the whole world saw it.

Generation Iron didn’t make Phil the villain, he did that all on his own. There’s a reason he needs a PR makeover and why he only does softball interviews. No one calls him on his antics and no one disputes his victim mentality. I think a big part of why Phil had such a low tolerance for criticism – whether constructive or not – is because of the fact he was the first Mr. Olympia whose reign started at the height of social media. I give him a lot of credit for that and I have been very forgiving of many of his shenanigans. Most past champions never had to endure this level of trolling and Phil most definitely got trolled, but he dealt with it all wrong. When you’re the best bodybuilder in the world, when you’re making huge prize money, collecting huge checks from sponsors, and raking in the guest posing, seminars, and in-store appearances money, then taking some abuse on social media or the message boards, is just something you might have to deal with. The fact he blocked so many people, doesn’t say much with regards to much he grew the sport.

There are some legitimate gripes Phil could have. For example, Generation Iron pushing the narrative that Kai lived in his cramped little apartment and had to struggle – was total Hollywood fluff. We’ve also seen that approach taken with countless videos with Kai’s old sponsor, Muscle Meds, with MD, RX, and others. It’s a very marketable. The idea that The Predator was winning Arnolds and living like a pauper is silly. The idea he was getting monthly checks from supp companies, magazines, and appearances, meanwhile walking to the dollar store to buy knockoff tupperware, is equally silly. To pin this peasant against a white collar, college-educated, privileged Phil Heath, that’s a legitimate bone Phil could pick with the film. That being said, Phil had to know that that was going to happen, because that’s how Kai marketed himself for the longest time. Why would Generation Iron be any different? If it ain’t broke, why fix it?

Phil, like Kai, also got to portray a fictional side to himself – a made-for-TV persona, if you will. When Heath said he recognized when he was wrong and that he showed a little humility from time to time, was totally inaccurate. A humble man wouldn’t have gone ballistic over how Kai Greene signed a poster or when Pro Supps launched a graphic with their, then, sponsored athlete Shawn Rhoden. A person who admits they’re wrong, wouldn’t be blame-shifting the bad rap he earned over an entire career on a movie he did half a decade ago. I can’t sit still and be indifferent as I see media outlets in this industry lining up to passively interview someone who’s actively looking to rewrite history and blame others for his misfortune. I’m also not sure how doing the movie helped him win more Sandows, as he stated on the MD interview, but I don’t typically reflect too much on what Phil says. I think he’s very smart, very driven, but he’s also a classic bs’er. Kai Greene also talks a lot of crap, don’t get me wrong.

The bottom line is, Generation Iron was entertainment. It did very well and as a result, sequels were made, and it became a major website in the media world. I don’t recall Phil ever being upset with how he was portrayed in Generation Iron, before. In fact, I’m pretty sure everyone who was involved, loved it. The thing is, maybe Phil needs to create some drama, so people will pay him attention, so it’ll create some interest for this production he’s spearheading. After all, he’s been accused of throwing shade on Brandon Curry, to get hits, much like many of the stars of the 90’s have been doing as well. The fact is Phil might be following the lead of these old farts because he sees it’ll get him a few more interviews. When’s the last time Jay Cutler talked crap about Phil, Shawn, or Brandon? Never. Then again Jay, with the support of Dave Bourlet, has a wildly successful Youtube channel, has a supplement line that people actually like, and has a calendar full of appearances. Phil, on the other hand, is doing interviews on his computer, taking selfies in the gym, and addressing realtors conventions.

I’m sorry, but let’s state the obvious. Softball interviews, re-writing history, throwing shade on current champions and playing the victim, pretty much sum up Phil Heath’s efforts for 2020. There’s still eleven more months in the year, so hopefully there won’t be much more of this. Will he ever get back on stage? I’d say no. It’s so much easier to talk than to get up there against Brandon, William, and, hopefully soon, Shawn Rhoden. Roelly Winklaar, for example, is going to prep all year long for the Olympia. Do you really think Phil wants to stand next to The People’s Champion at 110%? I don’t think so! I’m pretty sure we’ll see Phil up there, when Kai returns, which will be never.

I’m not too excited about Breaking The Olympia, but since I already subscribe to Neftlix, I’ll give it a watch and write an honest review. I hope it’s good and I do wish Phil the best. I don’t hate the guy by any means, I just wish he’d truly take some accountability and own his past. I was once a fan and I’d love to be again, but I’m a journalist and I’m true to my craft.