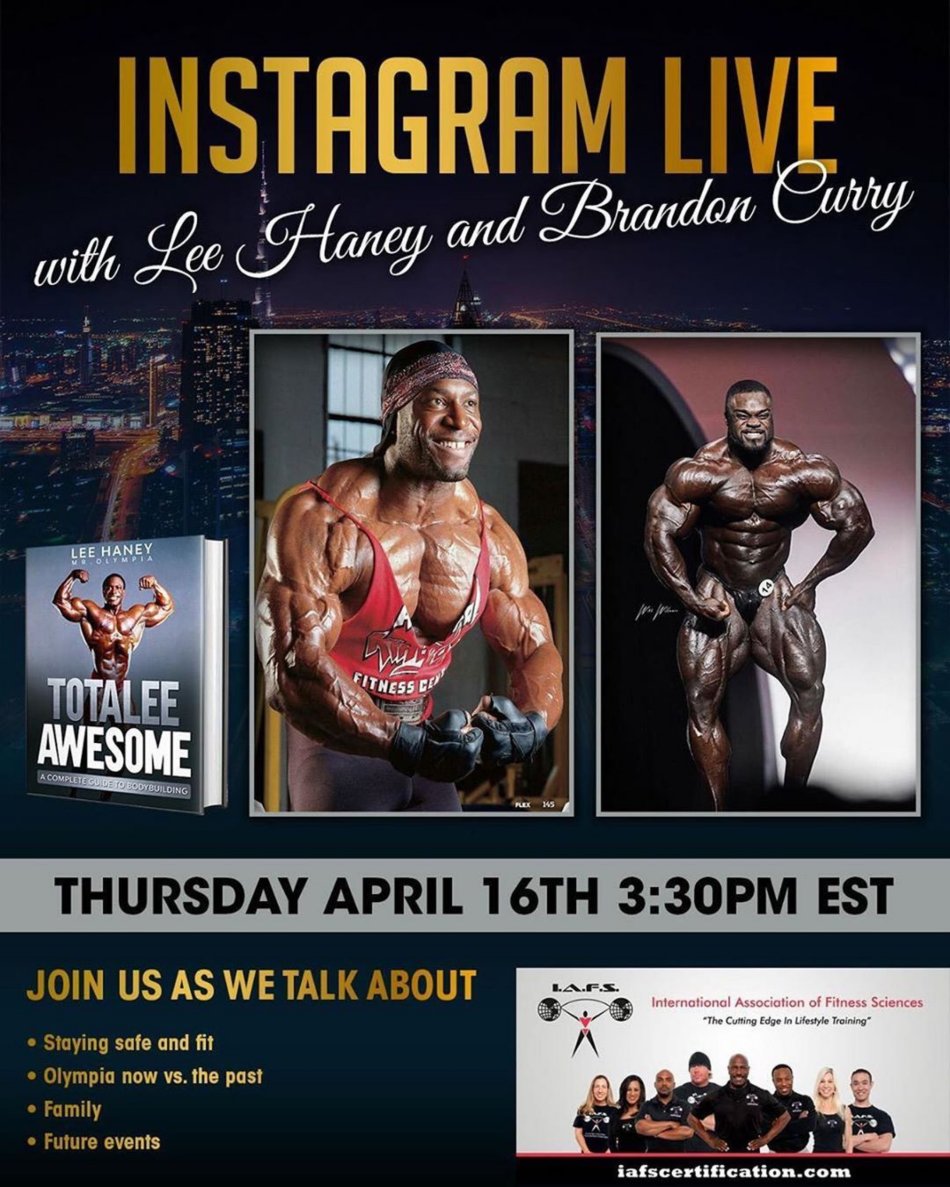 On Thursday, April 16th, at 3:30PM (EST), bodybuilding fans – all around the world – are in for a huge treat!! 2019 Mr. Olympia Brandon Curry will be hosting an Instagram LIVE on his page, featuring 8x Mr. Olympia, The Totally Awesome, Lee Haney!!

During these very tough times with Covid 19 ravaging the world, millions of people forced to stay home, and without any actual time for a return to normalcy, the level of despair has become a major issue among many; however, the sport of bodybuilding has seen many of its champions take to social media, to remind everyone that we will be ok. A big part of their contribution has been in the form of IG Takeovers, home workout videos, and collaborations. We’ve seen quite a few IFBB Pro’s become quite active, like The Welsh Dragon, James “Flex” Lewis, Santi Aragon, Nick Trigili, and 2018 Mr. Olympia Shawn “Flexatron” Rhoden. We’ve seen company owners like Marc Lobliner of MTS Nutrition really step it up with the unconventional (but still very effective) at-home workouts. Not a day goes by, that Marc isn’t dropping a new video and/or giving words of encouragement to his audience.

The fact is, no one is being paid to do put out all this content, but it’s done as an act of love. Perhaps, the single most active leader among all, is our 2019 Mr. Olympia Brandon Curry. Brandon has been all over the place, spearheading IG Live Takeovers, interacting with the fans, and even doing IG Lives with us. Just last week, Brandon sat with me for close to an hour at my IG, @StrengthAddicts, talking about all things bodybuilding – from King Kamali’s take on Patrick Moore doing Classic to how small businesses would face the financial crunch of state-mandated stay-at-home orders. The truth of the matter is, Brandon Curry has truly lived up to the ambassadorial role of being Mr. Olympia.

I really want to commend Brandon, once again. Just today, I caught a great interview that Ron Harris (Online Editor in Chief of Muscular Development) did with Jose Rayond. One of the questions Ron posed Jose, was whether or not, the top bodybuilder had a responsibility to be active on social media. I may have gotten the question slightly off, but that’s the gist I got.

It’s a very interesting concept because, especially during times like these, that the very best athlete of each division, should really be out there, inspiring people. Since we’re being told to stay at home and since social distancing is such an important factor in controlling – and ultimately defeating – this virus, then social media is really where the inspiring and motivating needs to take place. I have to say, what others may be too PC to or too chickensh*t to say, but a great many of our champions – past and present – are basically sitting on their hands or totally MIA. It’s very good to see that Brandon has stepped up and is showing love to everyone who loves bodybuilding – whether they are fans of his or not

An Olympia champion isn’t just the best male or female pro competitor in a given physique-based division in the world. They’re also a role model. Olympia champions are leaders! And this social responsibility shouldn’t just be for the year of their reign – it should be for a lifetime.

Dexter Jackson won his Sandow in 2008, yet, he has been all over social media, imploring people to stock up on food, follow social distancing guidelines, and to take this virus seriously. Other Olympia champions haven’t said two words. Some put out content to sell their products or grow their businesses, but in terms of actually taking the time to talk to the people, talk to the fans – let’s just say, they’ve been very slow to respond. It’s April 15th and they still haven’t…

Oh well, let’s not dwell on the selfish ones; let’s talk about this epic IG LIVE!!

Fans are in for such a huge treat on Thursday!! Not only will there be two great champions interacting with each other and the fans, but if you’ve been to any IG Live Brandon does, you know there’ll be a who’s who in the audience. Dan Solomon might show up, maybe Masters Mr. World Bob Cicherillo, Sugar Shawn Ray and/or “Flexatron” Shawn Rhoden!!

In fact, not too long ago, Brandon and Shawn did an IG Live, as did Brandon and Dexter. Now we’re going to see Brandon and Lee Haney!! There’s a common denominator in all these pairings and that’s Mr. Olympia Brandon Curry!! I know the scorecards only reflect physiques, but if there ever was a box or section for ambassadorship, Brandon should get a perfect score.

In addition to their love of bodybuilding, Brandon and Lee have so much in common. They’re both family men, both are husbands and fathers, and both have worked tirelessly on making bodybuilding a FAMILY-FRIENDLY sport!

We can sit here and talk about special effects, music, webcasts and social media options all day and night, but ultimately there are proven ways to grow this sport. Fitness should be fun for everyone, nothing would be better than to have entire families in the audience, websites accessed by all, and having pro fitness stars looked up to by all age groups.

It takes a certain kind of champion, however, to really lead the sport in the right direction. Look at how many bodybuilders have been tapped by the President of the United States to help spearhead fitness in America (Arnold, Lee Haney, Lou Ferrigno). When you’re on the radar of the most powerful officeholder in the world, you know you’re doing something right. Ambassadorship and philanthropy are so important. This is another reason I hope Brandon holds onto the title for at least three years. There’s no telling how much of a positive impact he’d have on the sport and industry, combined.

What I also like about what Brandon is doing, is that he’s left the door open for other champions, like 7x Mr. Olympia Phil Heath, to either join him or step up on their own. It may be because Phil has me blocked, but I haven’t seen or heard of him doing anything since the pandemic broke out. There’s other Olympia champions, some with six Sandows, others with 8, some with 1, some with 3, I don’t know…, I haven’t seen or heard much from them, either. Anyways, it’s great to see champions like Brandon, Flexatron, Flex Lewis and Dexter really stepping up. Fans, all around the world, are super grateful to you!!

I can’t tell you how much I’m looking forward to this IG LIVE, Thursday, April 16th at Mr. Olympia Brandon Curry’s Official Instagram!! I really hope I see all of you there.