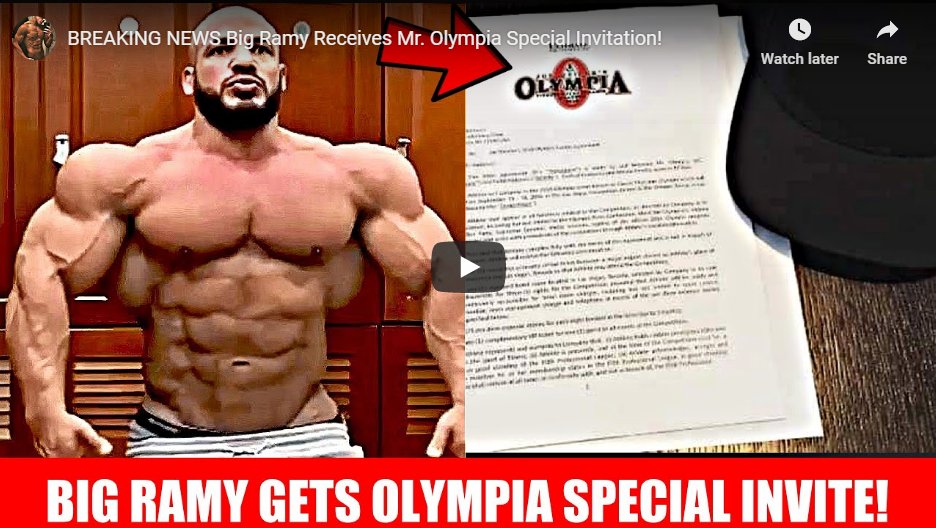 The Egyptian Phenom, Big Ramy has been given a special invite to compete at the 2020 Mr. Olympia. This means he will not earn the right to take the stage, either through automatically qualifying (Top 6 previous year), winning a pro show, or qualifying by points. He will compete because the federation decided to invite him. Although he competed at the 2020 Arnold Classic, for the first time in his career, he placed 3rd behind previous champions Dexter “The Blade” Jackson and William “The Conqueror” Bonac.

He did not compete at either the Tampa Pro or New York Pro, but did throw his hat into the Spain contest where the Top 3 would earn Olympia qualifications. Unfortunately, Ramy tested positive for Covid 19, and was unable to compete. Had he been any other bodybuilder he’d a been SOL (shit out of luck), but because Ramy is a fan favorite and because 7x 212 Olympia Showdown champion, The Welsh Dragon, James “Flex” Lewis had to withdraw because of an undisclosed injury, it’s my opinion, that Ramy was given this opportunity.

The Olympia needs to have many draws and with losing Lewis, it suffered a major blow. Ramy’s presence will not fill that void and they may argue that his special invitation is a federation-move, not an event one, and that they’re totally unrelated. To each their own. I’m of the opinion that without Lewis, it’s going to be harder to fill the seats for a contest just a week shy of Christmas. That being said, everyone wants to see what Brandon Curry brings, as well as his fellow Oxygen Gym colleague Roelly “The Beast” Winklaar. This contest MAY also be Dexter Jackson’s last, though, I don’t believe a guy who nearly wins the Arnold Classic and who could win the Olympia, should be considering retirement. It’s very possible that Dex has a change of heart. People are allowed to change their minds, especially the winningest pro in the history of the sport, right?

Before speaking more on Ramy’s good fortune, I’d also like to go on record as stating that I don’t think Phil Heath will compete. I’ll believe it when I see it, but something tells me, he will drop out. I have nothing factual to back this up with, except a hunch. Phil cannot beat Brandon. He could beat him years ago, but he can’t beat him now. If Heath gets on stage looking like he did in 2018, he’ll get his ass handed to him. Dexter, Roelly, William and most definitely, Brandon, will wipe the floor with him.

What makes Heath’s comeback even more doubtful as far as I’m concerned, is the big-dollar documentary that’s in the works around his prep. If this is to be like Pumping Iron, with a modern twist, and The Gift fails to bring an impressive look by peak weak, I could see where he jumps ship under any number of pretexts.

Could you imagine a huge film behind a 7x Mr. O going into contest where he places outside the Top 3?!?! Who’s going to buy that? It’s quite possible that this is Kai Green 2015 all over again. Unlike Greene’s special invite, then, Heath is a former Mr. Olympia, he can pretend to do the O every year and pull out. Even with a signed contract, would the Olympia really try to enforce it, sue for breach? They have far more pressing matters, like ensuring they have a successful event. In the rare instance that Phil is another no-show, then having Big Ramy makes sense.

I love Ramy. He’s a down-to-Earth, super chill guy, and he’s always been extremely nice to me. That being said, this isn’t personal. I’m stating the facts. Does Ramy deserve to be on that stage? No. Look at Nick Walker. Many have made a case for him winning Chicago. Akim Williams won and deserved it, but why doesn’t Nick Walker get a special invite? He looked amazing. He’s a rookie and won his procard in a tent. That’s a pretty hardcore story. Why doesn’t he get an invite? Maxx Charles has competed in a ton of shows, taking some tough placings, but never gave up. He was never considered for a special invite. If Maxx had come short on points, would he have gotten the call? Hell, no. That’s simply not fair. I don’t like what’s not fair, especially in a year like 2020.

If this is the Super Bowl of Bodybuilding, then it should be just that. This isn’t even comparable to a wild card. Ramy basically just got a free qualification and if Brandon is off, Ramy could be Mr. Olympia. No one who’s ever been granted a special invite has ever achieved that, but just the idea of it, seems like a major injustice. Ramy won’t be in the Top 3, but he will sell tickets. The Top 3 will consist of Curry, Roelly, and Bonac or Jackson. Ramy, Heath, and whoever else will be outside of that pack. I’m sorry, but that’s that – oh yeah and that includes Hadi. Mr. Choopan is not going to best The Prodigy, The Beast, The Conqueror or The Blade – not this time. It’s just not going to happen.

That being said, I’m excited to see what Chad Nichols and Ramy can put together in the next couple of months. The real bodybuilding fans will know that I’m being critically objective – that it isn’t trolling or sour grapes. This pairing can still come up with a formidable Top 6 outing, building from what they did in Columbus in March.

Can Ramy one day win the O? I say no; I say his time, if ever, has passed, but he can still do very well as a top guy, make a ton of money, and be very competitive in the 5th-9th range. The only way Ramy becomes a top contender again is in the unlikely instance where mass monsters take over the sport.

With the huge popularity of Classic Physique at the amateur level, coupled with the consistent popularity of Men’s Physique, fewer and fewer mass freaks are turning pro and doing damage. Nick Walker is a bit of a throwback to the 90’s and 2000’s, but that’s one guy. Ramy may be the one guy on the Olympia stage still pushing the mass card. And 2017 may have been the best he’ll ever do on the Olympia stage – and that’s awesome, but you can’t tell me that Ramy beats a 100% Curry, Bonac, or Jackson. Winklaar has a different look, but when he’s 100%, Ramy would have an extremely hard time edging him out.

2017 was Ramy’s golden opportunity and he couldn’t connect. Afterwards he ditched the Camel Crew, ditched Neil Hill, and ultimately settled with Chad Nichols. I’m glad to see him back in the mix, but times have changed. With Ramy’s addition, expect a lion’s share of media fanfare – from message boards to mailers to media outlets stoking the flames on message boards, predictions, and polls. Hype generates views and these sites rely on traffic to sell advertising. This is strictly a business move – nothing more – but it waters down the competition, in my opinion.

If bodybuilding ever wants to be taken as seriously as major league and Olympic sports, then it has to be entirely merit-based. I can see the special invite used for a guy who hadn’t competed in over a decade (e.g. Kevin Levrone) or a guy who served his country’s military (e.g. Cedric McMillan), but using it to give a guy who sat out the season, planning to compete in an easy (Top 3 qualifying), last minute contest, but who couldn’t because he caught Covid, that’s just weak. I’m a loyal guy, but loyalty doesn’t mean you agree with every decision. There’s being loyal and then there’s being a bitch. If I see something wrong, i’m not going to stay quiet.

The only reason, as far as I’m concerned, that Ramy has been given this special invite, is because Flex Lewis withdrew and the contest needs to sell tickets. There’s no other plausible explanation in my mind. That being said, the Olympia isn’t a circus sideshow. It’s supposed to be a stage of professional-level champions – whether it’s previous winners, guys who won a show, or guys who competed in multiple contests, never giving up, and earning enough points to make it to the most prestigious stage in physique-based sports. I don’t agree that Ramy should compete, but I do wish him the best.

What’s your take on the use of the special invite?