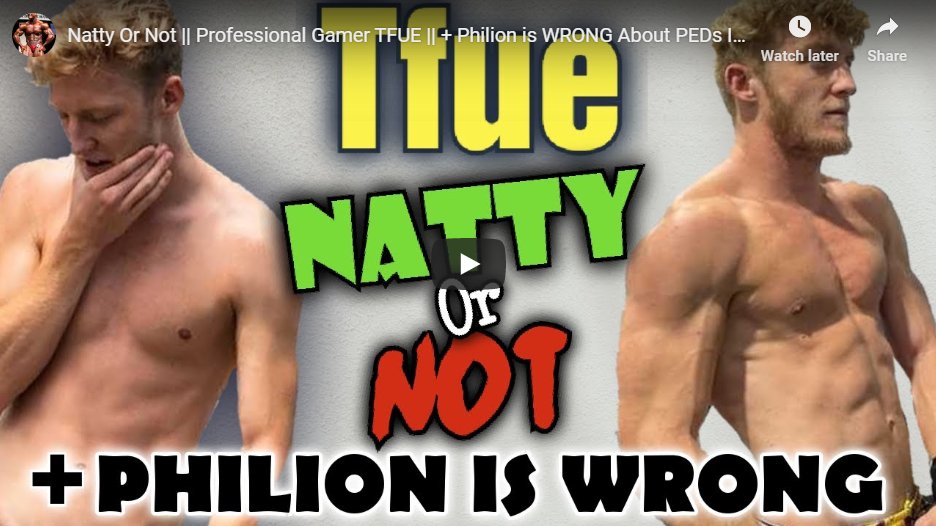 Is it a bar at the gym or a bar like “it’s 5 o’clock somewhere” type of bar? Honestly, who cares? Either way, this story I’m about to share is the true joke. It just so happens to be between the Fortnite gamer, Turner “Tfue” Tenney, and none other than the very opinionated IFBB pro bodybuilder, Greg Doucette.

I swear, sometimes our industry is so stupid it makes me laugh and shake my head at the same time. In case you haven’t been keeping up with industry news, Greg Doucette seems to be taking a lot of heat here of late for making stupid comments (or rather, he’s voicing his opinion). But, there’s just some stuff you can’t make up and the stuff coming out of Greg’s mouth here of late is pure comic gold.

For the record, I don’t know either of these guys so I don’t have a dog in the fight (can we even say that anymore or will all the snowflakes start protesting and rioting about animal rights and call PETA from using that statement?). I don’t have anything against these guys as it’s hard to bash them when I’ve never met or spoke to them. That being said, I do need to ask a question. Does anyone else think that Greg Doucette sounds like Gilbert Gottfried, the voice of the parrot in Aladdin?

So, Where’s the Beef?

Wendy’s is low on beef due to shortages caused by this whole Coronavirus mess we’re in, so Greg Doucette decided to have someone hold his beer so he could bring the beef. After scrolling through some of Greg’s YouTube videos, it’s clear he, like many others, is into doing the whole “Natty or Not” type of content production. I don’t pay any attention to it for the most part as it’s pretty clear who is and who isn’t if you know what to look for.

But Greg went out on a limb and said he would bet his life, my life, your life, your mom’s life, your first born’s life, your grandmother’s life, and everyone you know that Tfue’s transformation was achieved through the use of anabolics. Whoa whoa whoa. A gamer getting in on the juice? Say it ain’t so?! But seriously, who cares even if he did? What does it matter? I didn’t see anything where Tfue attributed his results to solely going the natural route though.

No Offense, But Did You See Tfue’s Transformation?

I’m not here to knock Tfue and his new physique. The dude is a gamer – why would he care how much muscle he has on his frame? It’s not like Tfue came out and said he’s going to hop on stage next to Greg Doucette and whoop his ass. Tfue is simply now a bigger small guy (if that makes any sense?).

Again, I’m not knocking Tfue one bit. I think his new transformation looks good and I’m happy to see he enjoys the gym and is seeing results from his hard work. He mentioned he’s been eating better and that he’s getting more serious in the weight room. Good for him! I applaud him.

I also applaud Tfue for his following. Holy snap, crackle, pop, Rice Krispies – this cat has over 5.5 million Instagram followers and over 8.5 million followers on Twitch. What the what?! And here my mom told me when I was younger that video games would rot my brain and you can’t make money playing games all day. Well damn… She was wrong! This kid’s making bank and has a huge following and influence just for playing video games! It makes me almost want to go buy a game system this second.

With that being said, I (personally) don’t believe Tfue used anabolics to achieve his new look. This is just my opinion and you (like Greg Doucette) may think I’m wrong with my opinion but I simply don’t see it.

Let’s back up the bus a little bit. Do you remember when you first started working out? After a few months, you probably noticed you’ve put on some nice size gains (unless you were sandbagging your workouts). You can call these increases in lean muscle mass “noob gains” or whatever funny term you feel like associating it to. If you haven’t seen Tfue’s before and after pictures, at his starting point he was a rail.

As you should know with bodybuilding, everything is about smoke and mirrors. When Tfue did his rebuttal video to Greg Doucette, he was in a t-shirt that made him look just as small as his before picture. Tfue’s not a big dude. However, with the right lighting, a pump, and the right angle, you can make yourself look pretty dang jacked. And no, I don’t think the pic was photoshopped either. He probably had a bunch of pictures taken and chose the best one. It’s no different than what any other fitness influencer in the industry does on a daily basis. And MOST of them ARE on the sauce, so why is Greg picking on a gamer of all people?

If you were a skinny dude, you know what even a little size can do to the look of your physique. When you have little wrists and such, adding any little bit of size to your arms will make them look jacked. Tfue was also lean to begin with so with the increase in muscle size, he is able to show off some pretty good vascularity due to his leanness. In my book and my eyes, his look is 100% attainable by anyone if they put in the time and are dedicated.

What am I missing here? Tfue looks like a kid who enjoys hitting the gym. He’s not out to be a bodybuilder and compete on stage – heck, he makes way too much money playing videos to put himself through all of that torture. He makes more money than probably every bodybuilder currently competing (and more than most of them combined!).

What are your thoughts on this? Do you think Tfue was taking anabolics to achieve his new look or do you (like me) think he did it naturally? Let us know down in the comments.